Throughout human history, migrants have not only fueled but they also lubricate the engine of human progress. The movement of people sparks innovation, spreads ideas and technologies, reduced poverty and inequality, and laid the foundations for today's globally interconnected economies.

Recently, the Russia 2018 World Cup has put to the limelight how migration have shaped today's world of football (soccer). Out of the 32 country teams that participated in this World Cup, 22 of them fielded at least one foreign-born player during the tournament (See Chart 1). This is without accounting for second and third generations migrant footballers. 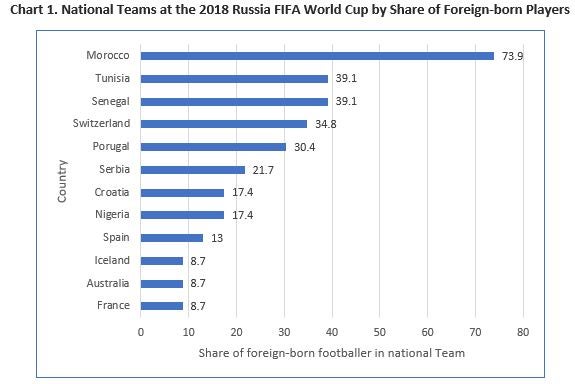 The contribution of second and third generations migrant footballers in the 2018 World Cup becomes obvious in the composition of the last four teams that made it to the semifinals – England, France, Belgium, and Croatia. Although Croatia has the highest share of foreign-born players (17.4%) out of the semi-finalists, more than 78% of the French team and 47% of the English and Belgian squads are children of migrants. This presents suggestive evidence that more diversity signals better outcome in World Cup matches.
This diversity is basically facilitated by the FIFA rules (2018) according to which players who are temporary or permanents migrants, or first, second or third generation diaspora could be eligible to play for the country there are tied to.  Such flexibility represents a great opportunity for especially vulnerable migrants or their kids or grand-children who might otherwise have no other options to succeed in life or achieve their dreams. Thanks to these flexible rules, migrants/diaspora are overrepresented in three out of these four semi-final countries when compared with the demographics of these countries (See Chart 2). In addition, they can play for their countries of origin: all Croatia’s players were returnees who led the country to the finals.

France victory is very compelling on how foreign descents from vulnerable regions can make a huge impact at the global stage if given the opportunity to demonstrate their talent. Thanks to their contribution, France won the World Cup trophy worth of $38 million in addition to other direct and indirect benefits such as improvement in consumer confidence, increase in spending and tourism.

Meritocracy in the world of football given its competitive nature puts someone from a poor family on an equal footing to someone from a wealthy family. However, such level playing field does not exist for immigrants without great footwork and fast-twitch muscles. As reported in the latest Migration and Development Brief 30, employment rates among immigrants are noticeably lower than employment rates among native populations in countries such as France, Belgium and the UK. The prevailing player selection schemes that make sure that the best players are selected regardless of their race, origin or religion provide lessons that should be replicated in other areas of human endeavor. Like an article in the Bloomberg rightly stated, some of the talented kids “growing up in no-hope areas today could be the Mbappes and Lukakus of tech, finance or the arts.”
Topics
Education
Countries
Russian Federation