Last October, I wrote a blog on the closing of bank accounts of money transfer operators in Australia.  I reported that “Westpac would close the bank accounts of MTOs serving Somalia by the end of November.”

Money transfer operators are taking banks to court for closing their bank accounts worldwide. In the UK, Dahabshiil was able to settle with Barclays last April to move the accounts to another bank by a date in the future.  In Australia, almost 20 remittance service providers sued Westpac Banking Corporation to prevent the bank to close their bank accounts last November. Westpac is the last bank allowing remittance firms to have accounts in Australia.  A class action has been commenced in the Federal Court of Australia based on the claim that Westpac has not provided its remittances transfer operators customers advance notice of the closing of their bank accounts and on the access to the foreign exchange platform. At the hearing in court on November 28, “Westpac agreed to continue transferring funds on behalf of remitters until December 22, when the full case is expected to be heard over two days.”

AUSTRAC, which is Australia's AML/CFT regulator, reported that “a number of Australian banks have taken decisions to cease providing banking services to alternative remitters. These decisions have been taken in response to concerns about the perceived reputational, money laundering and terrorism financing risks associated with the sector.” However, “AUSTRAC encourages banks to continue to assess the particular risks relating to their customers in line with the risk-based approach.”

Although the goal of the G-20 is to reduce remittance costs, the closing of bank accounts is having the opposite effect. For example, in Australia where three of the four commercial banks closed the accounts of money service providers, the cost of remittances have increased by 2 points in one year. 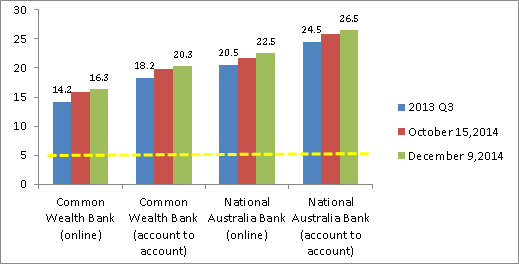 Source: Remittances Prices Worldwide database. Third quarter 2013
No data was reported for these banks in the Third quarter 2014 in this database
Send Money Pacific. Updated on December 9, 2014

If small money transfer operators will close their operations due to the closing of their bank accounts, costs will increase even further due to the lack of competition.  The existing cost gap between banks and MTOs is high. For example, sending $ 200 from Australia to Fiji (account to account) using a money transfer operator costs $ 9.2 while sending the same amount through a commercial bank costs $ 53.1 (sendmoneypacific.org).

Given the increase on court cases due to anti-money laundering and counter terrorist financing (AML/CTF) measures, it is time to take a risk-based approach and avoid the sending of remittances through informal channels. There is need to develop a fair regulation for high volume, low-value transactions.
Countries
Australia
Regions
Africa