Declining private investment in infrastructure – a trend or an outlier? 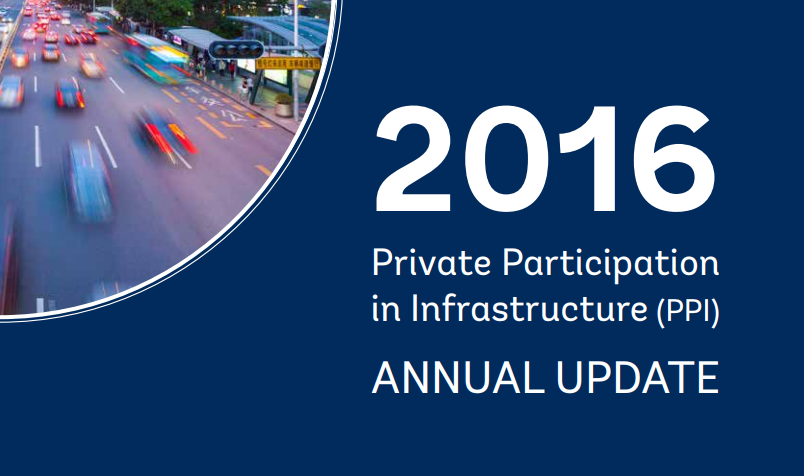 We’ve just released the 2016 update for the World Bank’s Private Participation in Infrastructure (PPI) Database and it makes for some gloomy reading. Investment commitments (investments) in infrastructure with private participation in Emerging Markets and Developing Economies (EMDEs) fell by a whopping 37% compared to 2015.

The decline from last year can be explained by the presence of one very large project—Turkey’s IGA Airport ($35.6 billion), which had boosted the 2015 numbers. Subtracting this project from 2015 figures means global private commitments in 2016 would have only been 8.2% lower than in 2015 ($77.8 billion). But this is no cause for comfort: 2016 saw volumes 41% lower than the preceding five-year investment average ($121.4 billion) and was the lowest level of investment commitments in 10 years. The declining investment trends are due to fewer projects being implemented. The 242 projects recorded in 2016 are 27% lower than the number of projects in 2015 (334 projects) and 57% lower than the annual average of 421 projects per year.

The big “bump” in activity that occurred over the period 2009-2015 has disappeared. Large economies that had big public-private partnership (PPP) programs—like Turkey, India, and Brazil—are seeing much lower levels of activity than during the peaks of that period.

Investment in infrastructure with private participation as a share of GDP also declined in 2016, to 0.3%—also its lowest level in 10 years. International Development Association (IDA) countries saw a very modest increase in PPI investment commitments in 2016. But 2016 totals were about half of the annual average over the 2011-2015 period and only seven countries did projects.

There were some bright spots. Renewables continued to be strongly favored by private investors in EMDEs in 2016  —88% of electricity generation projects with private participation relied on renewable technology. Renewable investments totaled $20.4 billion, comprising 61% of the total investment in electricity generation projects. Furthermore, preliminary numbers in the first half of 2017 are showing a marked increase, giving cause for hope that 2016 might be the trough of a cycle.

With the increased focus on mobilizing private finance for infrastructure, the 2016 figures show how far the market needs to recover to see PPPs make a significant contribution.  The overall weak levels of investment though suggest that more work needs to be done to strengthen sector financial performance in EMDEs as a whole to bring in more investment, public and private. Multilateral development banks such as the World Bank Group have a role to play in this mission by using their financial assistance to catalyze, mobilize and crowd in other sources of funds for development. Private sectors should be encouraged to participate much better in infrastructure , this can not occur without the mutual cooperation between the lenders , mainly the World Bank , and the assigned developing country
The decline of it's share maybe as a result of , the private sectors mistrust
that , these sectors will not gain acceptable profit as much as the public sectors.
Private investors should be guaranteed the same priviliges as the public sectors,
maybe more .
In this case the two pillars of PPS will go hand in hand without any differences
between private and public sectors.
Yours Very Respectfully,
Dr. Mohamed Taher Abdelrazik Hamada, Ph.D
Retired Professor at Strayer University, USA

Could not it be because of the oil price drop, at least for the Middle East?

So the question to my mind is: demand or supply? Is the decline because investors are not investing or because governments are doing fewer PPPs? Or is it just taking longer to run PPP tenders (a good thing if it means that more are completed successfully)?

The decline is connected to massive misleading campaign international financial institutions embarked upon to sell PPP projects to developing countries, neglecting core neoliberal values of PPP — greater efficiency. The focus was more on circumventing budget constraints with PPP, including, making promise that PPP could address the fiscal constraints by freeing more resources for govt to use in attending other pressing national issues.
This hefty promise was far from reality as these countries did not only fail to recover from the strenuous fiscal constraints, their PPP projects are not returning value for money for govt but enriching investors. To address dwindling appetite for PPP projects among developing countries, focus should be more on assisting developing economies build enabling environment that PPP can thrive upon. This is key!