How are PPPs really financed? 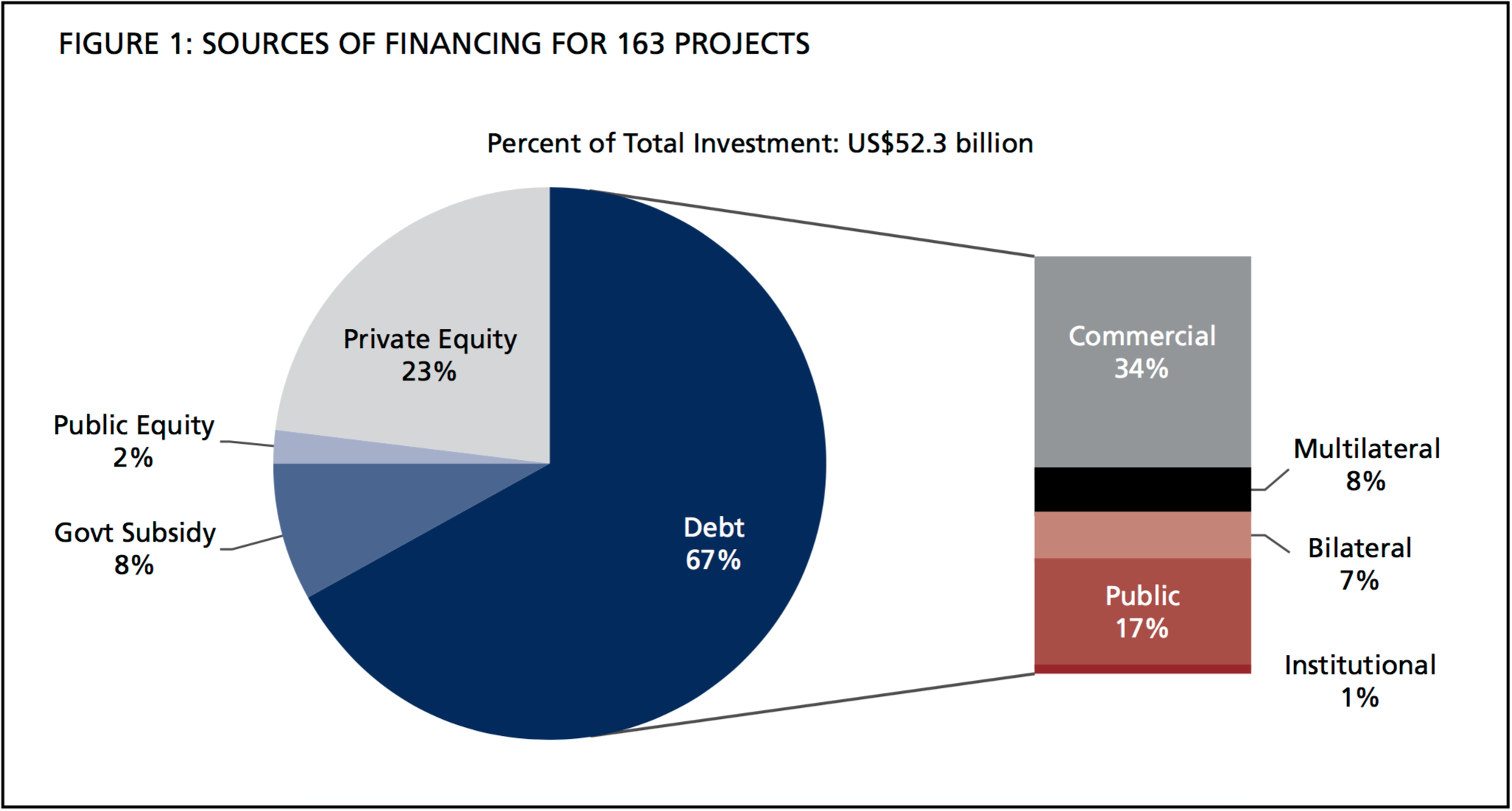 One of the prevailing notions about PPPs is that upfront costs are wholly paid for by the private sector, allowing the public to spread their costs (whether as users or through taxes) throughout the life of the project. However, this is a myth – governments, multilateral development banks (MDBs), and bilateral financing institutions all play strong roles in the various stages of financing PPPs. Just what kind of role, and how big, requires looking at the data.

Fortunately, now for the first time, it is possible to view the breakdown of financing sources for PPPs in low- and middle-income countries on the PPI Database. Accompanying the data is a recently released note that analyzes the sources of financing for 2015 PPP projects in these countries. The findings indicate that, in fact, financing for PPPs comes from a diverse mix of sources.

The Sources of Financing Note, available on the PPI Database website, breaks down the data on how upfront capital costs in PPPs in the dataset are financed globally, and by region and sector.

The findings indicate that in fact, only about 60% of the investment in PPPs are financed through the private sector, which in this case includes sponsor equity and commercial bank debt, as well as investment from institutional investors. Not surprisingly, commercial lenders tend to be the most active in what they perceive to be more “bankable” deals, such as projects in stable, upper-middle-income countries and in more profitable sectors like power and transport. Moreover, within the private sector, costs are financed through various types of debt and equity, each with its own risk profile (and corresponding required return on investment), which affects the way the project is structured.

The remaining 40% are financed through either the public sector (including upfront capital subsidies, equity from state-owned enterprises, and loans from state-owned banks) or through multilateral and bilateral development banks. The public sector accounts for about a quarter of total investment, and multilateral and bilateral development banks combined account for about 15%.

Clearly, this indicates that governments and multilateral banks such as the World Bank and the International Finance Corporation (IFC) play an important role, particularly in places where commercial sponsors and lenders are hesitant to invest otherwise. For instance, multilateral development banks contribute a larger share of financing to PPPs in International Development Association (IDA) countries (19%) than in non-IDA countries (7%). IDA is the part of the World Bank that provides the largest sources of assistance to the world’s 77 poorest countries.

Other key findings include:

The analysis is based on 163 PPPs in low and middle-income countries that reached financial closure in 2015 and had financing information available. Many projects in the PPI Database were excluded due to lack of financing data. These projects were in China, Latin America or the Caribbean where there are many small-scale PPPs that are locally developed and funded. Therefore, the figures found in this report tend to be slightly biased towards larger projects where more financing information is available.

We are planning to make similar data available for PPP projects from the past five years in the PPI Database. Armed with this data, we can have a more nuanced and informed discussion about how PPPs are financed.
Topics
Energy
Financial Inclusion
Financial Sector
Infrastructure & Public-Private Partnerships
Competitiveness
Regions
The World Region Hi Asif, thanks for your comment. The missing percentage in each case would be covered by MDB/bilateral financing, which we considered neither public nor private in this study.

Thanks for distilling and sharing this useful data, Jenny.

We are a gaggle of volunteers and opening a new
scheme in our community. Your web site provided us
with useful info to work on. You have done an impressive task and our entire community will probably be grateful to you.

Hi Jenny! Nice post. I just would like to ask though if the sources of financing data by country as presented in the Note is available in PPI database? I could not seem to find it. See reference passage below.
"The Sources of Financing Note, available on the PPI Database website, breaks down the data on how upfront capital costs in PPPs in the dataset are financed globally, and by region and sector."
Thanks!

Hi Jenny!
Thanks for the post.
I just have a couple of questions:
1. In your blog, you mentioned "Fortunately, now for the first time, it is possible to view the breakdown of financing sources for PPPs in low- and middle-income countries on the PPI Database." -- I checked the custom query of the PPI database and I could not find the financing sources data by country as shown in Figure 3/Appendix B. Is it located in a different repository?
2. In the Note, Figure 3 has "DFI equity" but in the supposed detailed breakdown in Appendix B, there is no entry for DFI equity. Additionally, in Appendix B, there's an item labeled as institutional debt. Is this subsumed under public debt in Figure 3? Apologies but I can't seem to find the explanation regarding these in the text.
Thanks!

Interesting and high quality article. The financing composition of Public-Private-Partnership (PPP) is very important factor for investors. It shows how much risk can be taken and how many opportunities are available. One of the examples of successful PPP projects is Lithuania, for example, here can be found more information http://www.investlithuania.com/business-locations-projects/ppp/ .