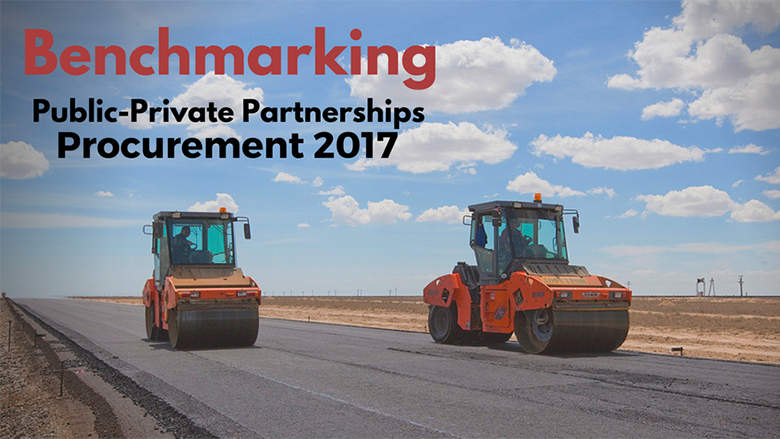 It’s widely acknowledged that how well governments prepare, procure and implement public-private partnership (PPP) projects is important both in bringing in private finance and/or expertise and ensuring these projects deliver value-for-money.

However, up until now there has been no systematic data to measure those capabilities in governments. This has changed with the release of the World Bank Group’s Benchmarking PPP Procurement 2017, which collects and presents comparable and actionable data on PPP procurement on a large scale by providing an assessment of the regulatory frameworks that govern PPP procurement across 82 economies. It presents an analysis of practices in four areas: preparation, procurement, contract management of PPPs, and management of unsolicited proposals (USPs). Using a highway transport project as a case study to ensure cross-comparability, it analyzes the national regulatory frameworks and presents a picture of the procurement landscape at the end of March 2016 by scoring each of the four areas.

We have found that across the four areas measured, most economies fall short of good practice. In particular, a significant number of economies have low scores in two areas: project preparation and contract management.

PPPs should emerge from a public investment planning process that assesses the merits of all projects and then decides on the implementation approach. Benchmarking PPP Procurement finds that only 55% of countries surveyed require consistency between the projects pursued as PPPs and the public investment program—and only a quarter have detailed procedures for ensuring that consistency.

The study also finds gaps in the approaches to implementing the rigorous assessments that PPP projects require. Two-thirds of the economies surveyed require socioeconomic impact, affordability, risk identification, bankability, and comparative assessments (PPP versus traditional procurement) of a potential PPP project. However, only about one-third of these economies have adopted specific methodologies for conducting such assessments. In almost half of the economies, a market assessment is not required at all, and only about 10 percent have adopted a methodology for such an assessment. Thus, many economies are likely taking projects to market without having systematically measured interest from the private sector.

Good contract management is essential to achieve expected project outcomes. Although in most of the economies the private partner must regularly provide performance information and the responsible government authority must gather it (60 percent and 73 percent, respectively), in only 16 percent of economies is this information required to be made publicly available.

Benchmarking PPPs shows there is more generally considerable scope to improve practices related to the disclosure of information on PPPs. Having a transparent process requires making publicly available all the information relevant to ensuring a competitive process and provides better information to stakeholders about the project. While most countries publish the tender notice (93 percent) and a majority publish the PPP award (74 percent), only 23 percent publish the PPP contract, and of these very few publish it online.

On the positive side, Benchmarking PPP Procurement found that in conducting PPP procurement, many economies perform closer to recognized good practices. Yet there is still room for improvement in two areas: (a) the minimum time granted to potential bidders to submit their bids and (b) the approach to handling sole bidders. Forty percent of the economies surveyed either do not specify a minimum period for the preparation of bids or require a period of fewer than 30 days, which is too few, and only 15 percent of the economies have a detailed process to address cases when only one bid is received.

The report also looked at practices around the treatment of unsolicited projects (USPs). While these can allow the government to benefit from private sector innovation, there may also be concerns on the transparency of these. The difficulty with USPs lies in getting the right balance between encouraging private companies to submit innovative project ideas and maintaining the transparency and efficiency gains of a competitive tender process. Of the economies surveyed, 32 percent have no provisions that specifically regulate USPs. Even where these exist, only 21 percent provide a detailed framework for ensuring consistency with government priorities, and only 13 percent guarantee a period of more than 90 days for proposal submission—that is, a sensible length of time to introduce competitive tension, challenging the original proponent in a competitive tendering process.

While there is a gap between what is currently done and good practices for many of the 82 economies in the four areas surveyed, the good news is there are readily available methodologies and approaches countries can adopt to bring their approaches in line with these good practices. To help in this regard, the World Bank Group and other Multilateral Development Banks have developed a series of tools that cover different aspects of the project cycle—investment prioritization, fiscal risk assessment, and the improvement of transparency and disclosure around PPPs—which governments can use to help improve what they are doing. We are also working to bring out guidance on how to handle unsolicited projects and methodologies to use when selecting which projects to undertake as PPPs. a, good relationship to work together

What's up all, here every person is sharing these kinds of know-how,
therefore it's pleasant to read this web site, and I used to pay a visit
this weblog every day.

PPP benchmarking is a powerful tool. We have benchmarked our PPP framework to those of our neighbors-competitors- and we can clearly see areas of weakness and strengths, where we will have to work in order for our PPP project framework to be more consistent, competitive, transparent and attractive.

Must be great document!
Unsolicited proposal approach might destroy the essential value that PPP aims to deliver.

It would be interesting to have a similar document benchmarking capability to undertake sub national PPPs.