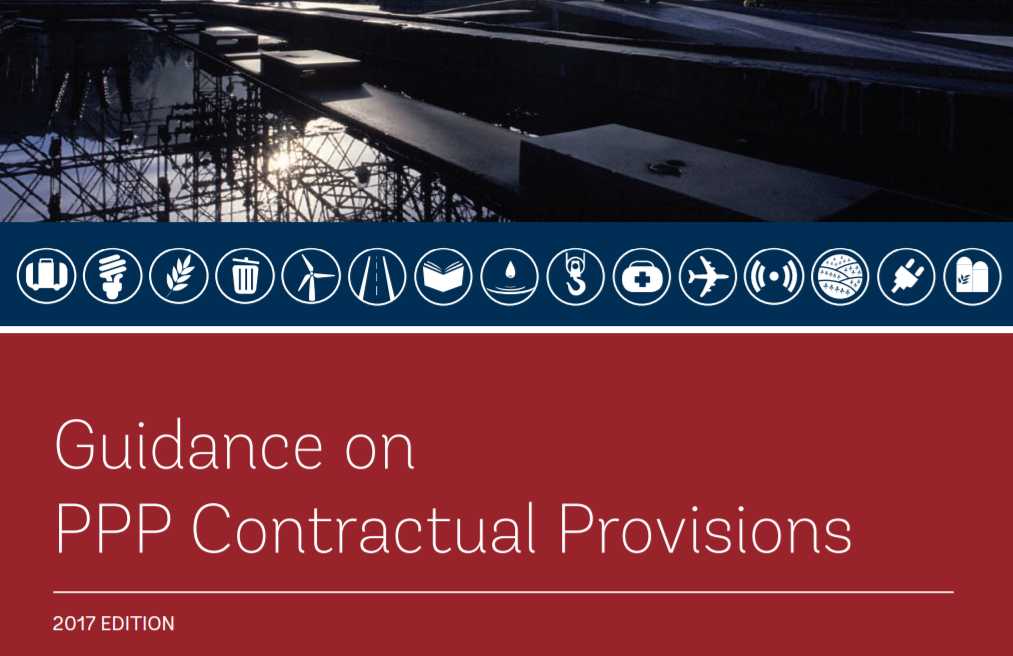 What are the key considerations for a public authority when drafting a Force Majeure provision in a Public-Private Partnership (PPP) contract? What are the differences between emerging and developed PPP markets in treating Change in Law clauses? And are there particular legal matters that need to be contemplated in a civil law jurisdiction rather than in a common law country when dealing with termination payments under a PPP agreement?

These are only some of the questions the World Bank Group’s recently-published Guidance on PPP Contractual Provisions, 2017 edition aims to address for the benefit of public authorities (contracting authorities) involved in PPPs. This blog is the first in a series of posts that will discuss and explore the issues covered in the 2017 Guidance.


The rationale: No ‘one size fits all’…

While PPPs are widely used to develop particular infrastructure projects, their complexity often means that such transactions are heavily negotiated. Considerable time and cost is spent preparing the PPP contract between the respective contracting authority and the private company (private partner). To shorten the negotiation process and reduce expenses, several countries, including the United Kingdom, South Africa and India, have developed standardized PPP contracts for infrastructure projects in various sectors, such as power generation, roads or railways.

By contrast, complete PPP contracts have, to date, not been developed on an international basis given the differences between legal systems around the world, the variety of PPP transactions globally, and the need for customized contractual provisions to fit the individual characteristics of specific projects.

… but getting to common standards …

Against this background, the 2017 Guidance focuses on eight selected provisions encountered in virtually every PPP contract/structure  to assist contracting authorities, particularly those in emerging markets, with obtaining a common and better understanding of the contractual language typically used in each of these cases.

The clauses that are set out comprise: At the same time, the 2017 Guidance details key considerations for contracting authorities to bear in mind when developing these provisions for their own specific PPP projects in their own jurisdictions. Some key matters outlined concern differences between legal systems (civil law versus common law) and between emerging and developed PPP markets. These may require modifications to the language used in, for example, a typical Force Majeure or Refinancing provision. In addition, the 2017 Guidance contains considerations for contracting authorities related to bond-financed and corporate financed PPP transactions.  These are helpful in instances where alternative sources of finance other than long-term commercial bank debt (the mechanism commonly used to finance PPP projects) have to be explored by the private partner.

… as part of an evolving process

In line with the overall aim of the 2017 Guidance, this blog series is part of an evolving process, with further entries on the contents of the 2017 Guidance to follow in the coming months. By doing so, we hope to solicit and collect further feedback on the contractual provisions from all relevant stakeholders. Your input will help in regularly reviewing and updating the document.

As we continue to disseminate and promote the 2017 Guidance, we look forward to receiving your comments— either on this platform or during future events featuring its contents, such as the first African Roundtable on Infrastructure Governance to be held in Cape Town, South Africa on November 2-3, 2017, hosted by the Development Bank of Southern Africa and sponsored by, amongst others, the World Bank Group, the African Development Bank, the Global Infrastructure Hub and the Organization for Economic Co-operation and Development. Thank you for this information

Public authority , that represents the majority of the pobulation of any
assigned country should have a major role in refinancing provisions in PPPS .
The World Bank has cited this point about public authority role in refinancing
provisions .
Yes, there is no standard PPP contracts that can fit all cases , each case
has it's own differences and similiarities , that should be tackled seperately
specially on the international level.
Yours Very Respectfully,
Dr. Mohamed Taher Abdelrazik Hamada, Ph.D
Retired Professor at Strayer University, USA
[redacted]

thank you so much for your informations

Commendable! This would contribute to reducing the complexity involved in drafting a PPP contract

This is an outstanding initiative. Just to point out how it links to the PPP Certification Program promoted by WB and other MDBs and the related body of knowledge, the PPP Certification Guide, which in its chapter 5 deals with contract structuring and drafting. Next version of the PPP Cert Guide will have to be updated to incorporate main messages/guidance that this new guide provides, as well as to be clearly referred as one of the main sources for the topic of drafting main contract provisions.
thanks
Andrés Rebollo
CEO K-Infra a CP3P ATO

Thank you very much for your feedback and pointing out the important interface between the Guidance on PPP Contractual Provisions and the PPP Certification Program. It will indeed be useful if the former was added as one of the resources in the context of contractual drafting in a future iteration of the program.

Looking forward to reading it. Thanks to all responsible for its development and publication.

I appreciate it. It is really helpful.

I wish this resource were available a few years ago, for many a dead project would be alive today.

Thank you for sharing this document. I worked on the Lekki Toll Road Infrastructure Project by Lekki Concession Company (LCC)in Lagos, Nigeria as a Project Manager. This is the first PPP Toll Road Project in West Africa. I saw the need to update the PPP contract which we used to draft the agreement with stakeholders. Though Clause 1.2.2.6 have not been effected in the Project since the inception of Toll Collection in 2009.
This is much appreciated.
Kind Regards,
Christian Azuka Olele.
[email protected]

Thank you very much for sharing your experience on this specific project. Going forward, it will be indeed helpful to hear from contracting authorities about their practical experience in using the Guidance on PPP Contractual Provisions as one of the inputs when assessing the issues specific to their own PPP project and developing contractual provisions together with their advisors.

The PPP contract update is much appreciated. I worked on the First PPP Lekki Toll Road Infrastructure Project in Lagos, Nigeria. I can attest to the value of PPP's.
Thank You.
Kind Regards,
Christian Olele.

At the request of the Heinrich Boell Foundation, the law firm of Foley Hoag LLP reviewed the Guidance to determine whether the contractual provisions recommended by the World Bank Group achieve an appropriate balance between contracting parties, and adhere to common practices and international law.
The legal analysis found that the Guidance does not take an equitable approach to balancing public and private interests. In attempting to achieve its overriding objective of promoting PPPs, the Guidance neglects the long-term and legitimate interests of developing countries. As a result, the World Bank Group’s client countries and their citizens are potentially ill-served by the Guidance.
Please read our analyssis here : http://us.boell.org/2017/09/15/key-messages-world-bank-groups-2017-guid…

Thank you for sharing your comments. First of all, the World Bank PPP team would like to acknowledge how much the Guidance on PPP Contractual Provisions benefitted from the comments the Heinrich Boell Foundation has provided at different stages during and after the public consultations on the draft document earlier this year. The Guidance also received extensive feedback from practitioners from both the public sector (government entities, particularly PPP Units and Ministries of Finance as well as international organizations) and private sector (legal and technical advisors, lenders and developers). In line with these comments, we believe the Guidance represents current, broadly accepted good practice in the allocation of risks between the government and the private sector. We look forward to continue engaging with all relevant stakeholders interested in fostering discussion and understanding of appropriate contractual language in PPP agreements with a view of updating the Guidance by means of a future iteration.

The fastest way of deepening the use of ppp in the delivery of infrastructure projects particularly at sub-national government in developing countries is to standardize the contract provisions in different sectors by taking into consideration the applicable law in that jurisdiction which can be developed by ppp programme oversight institution as a source of guidance. This will deepen the understanding of ppp by both private and public sectors players. Some provisions particularly the Financing structure can be flexible to accommodate each project peculiarities. The World Bank 2017 Guidance on Contractual provisions is a great step in this direction.

A useful addition to the PPP Library