Can China be an innovation powerhouse?

China has made great strides toward innovation and technology-driven economy in recent years. There are many firms that are emerging as global players in the technology arena, especially in the ICT sector, such as Lenovo, Huawei, ZTE, Tencent and Xiaomi (which has shaken the legendary smart phone makers – Apple and Samsung – through its disruptive innovation). There are even some world-class competitors in the automotive sector, such as BYD and Geely. China has also become one of the few global players in such technologies as high-speed trains and passenger aircraft: China recently won several international bids for high-speed train projects, and on November 2 in Shanghai it demonstrated its first home-grown large passenger jet, the C919.

China’s R&D spending had risen to more than 2 percent of GDP by 2013 (see Table 1) and 2.1 percent in 2014 by estimation, which is above the average of the European Union countries, and China’s target is 2.5 percent by 2020. Its patent applications (both for residents and for non-residents) exceeded 825,000 in 2013 and ranked No.1 globally. China’s number of published scientific and technical journal articles exceeds that of Germany, Japan and the UK, and China now publishes about two-thirds as many as the United States. As a latecomer, China has made some remarkable achievements.

To strengthen its innovation efforts still further, China has launched the “Made in China 2025” initiative. In its recently published 13th Five-Year Plan, China has positioned “innovation” as one of its key objectives. 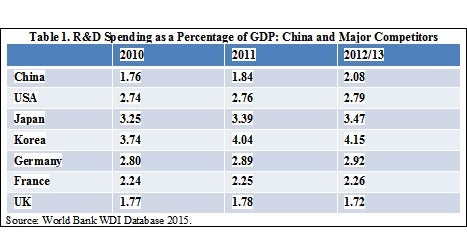 On the other hand, while China is catching up with the global leaders in certain sectors and is rapidly shrinking the distance with them in overall R&D inputs and outputs in terms of quantity, compared with global innovation frontier, China still faces great challenges in terms of achieving R&D quality and making its scientific results commercially relevant.

Although China is making the transition from “Made in China” to “Invented in China” in an economy that is slowing, its vast manufacturing sectors (especially SMEs in labor-intensive sectors) are facing difficulties moving up the global value chain. Some of them have moved overseas. Despite its impressive growth of patent applications, China’s total number of patents that were granted by the USPTO was 7,921 in 2014 – less than half of Korea’s or Germany’s number. Many of China’s successful patent applications were actually owned by multinationals. Universities generate a large volume of patents, but their utilization rate is only about 5 percent, with the bulk of the research not relevant for business.

Overall in 2013, China invested relatively little of its R&D spending (just 4 percent) in basic research compared to most OECD economies (17 percent), and its R&D spending is still heavily oriented toward developing S&T infrastructure, i.e. buildings and equipment. With regard to top-cited scientific publications, China may seem to be converging with the United States in terms of volume, but the same does not hold true in terms of quality, if measured by the percentage of domestic documents in the top 10 percent of most-cited publications.

Figure 1 shows that China is far behind the United States and Germany in terms of “firm-level technology absorption,” the rule of law, regulatory quality, private-sector spending on R&D and quality of management schools, among other priorities. The recent Global Competitiveness Report 2015 from the World Economic Forum underscored these weaknesses by ranking China at No. 68, out of 140 countries, for “higher education and training” and at 74 for “technological readiness.” Although China has the world’s largest pool of human resources for science and technology, the share of tertiary graduates in general, and of doctoral graduates in science and engineering in particular, are still low. These have prevented China from fully reaping the benefits from its rapidly increasing S&T inputs. 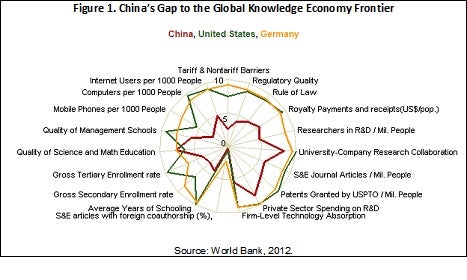 However, it should be noted that, despite these weaknesses, China’s situation is quite commensurate to its current upper-middle income country status, and is in fact among the most competitive among the BRICS countries. Process innovation and technology diffusion are still quite relevant for China.

In a longer run, for China to move up the global value chain faster and truly become a global innovation powerhouse – and thus make a successful transition from a labor-intensive manufacturing economy to a knowledge- and technology-intensive economy – the country may need to further improve its innovation ecosystem. Among other priorities, China will greatly benefit from the following:


In sum, China has come a long way in a short time and has become one of the key players in many high-tech arenas, building on its economic success. On the other hand, it still faces many challenges in moving up to the global knowledge and technology frontiers. Further structural reforms and well targeted measures will help China to accelerate its transition towards a truly global innovation powerhouse.


Recent publications on innovation and competitiveness by Douglas Zeng (including co-authored or co-edited): Thank you Douglas! I wonder why the ICT sector in China is particularly successful in tech catch-up and innovation. Any thoughts on this?

Thanks for your question, Juni. One of the reasons that China is catching up quickly in the ICT sector is that the sector itself is relatively a new sector globally and characterized with fast changing technologies, thus, it’s relatively earlier for late comers to leapfrog or disrupt than other mature sectors, such as automobile and other high-tech manufacturing. The huge market demand for ICT products in China also helped to support the ICT firms to survive, grow and innovate.  Also, it should be noted that China is also catching up in other high-tech areas, such as high-speed trains and passenger aircrafts which are traditionally dominated by a few players.