The changing face of entrepreneurship 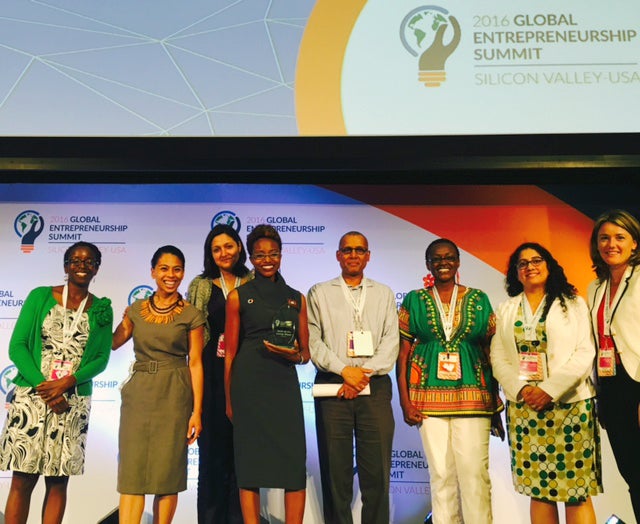 
What do you picture when you hear of new technologies and hot startups? Perhaps a trendy office space overlooking the Golden Gate Bridge and tech moguls from San Francisco? Well, think again.

At the recent Global Entrepreneurship Summit (GES) in Silicon Valley — an annual event hosted by President Barack Obama and attended by nearly 700 entrepreneurs — one message came across clearly: Great ideas come from anywhere. And, increasingly, they’re coming from talented entrepreneurs who are overcoming the odds in cities like Nairobi, Kenya or Kingston, Jamaica.

Increasing internet and mobile-phone access is bringing new opportunities to young entrepreneurs from developing countries. More than 40 percent of the world’s population now has access to the internet and, among the poorest 20 percent of households, nearly 7 out of 10 have a mobile phone.

Businesses that can take advantage of the widespread use of digital technologies are growing at double-digit rates — in Silicon Valley, as well as in emerging markets. Ground-breaking technologies and business ideas are flourishing across the world, and a new, more global generation of tech entrepreneurs is on the rise.

The potential impact — economic and social — is significant. Entrepreneurs have a powerful ability to create jobs, drive innovation and solve challenges, particularly in developing economies, where technology can address old inefficiencies in key sectors like energy, transport and education.

“[I]n our era, everybody here understands that new ideas can evolve anywhere, at any time. And they can have an impact anywhere,” said John Kerry, the U.S. Secretary of State. “In my travels as Secretary, I have been absolutely amazed by the groundbreaking designs I’ve seen, by the ideas being brought to life everywhere — sometimes where you least expect it.  By the men and women striking out to create new firms with an idea of both turning a profit as well as improving their communities.”

But for many of the brightest minds in developing countries, entrepreneurship is not an easy path.

As President Obama said during the Summit: “It turns out that starting your own business is not easy. You have to have access to capital. You have to meet the right people. You have to have mentors who can guide you as you get your idea off the ground. And that can be especially difficult for women and young people and minorities, and others who haven’t always had access to the same networks and opportunities.” 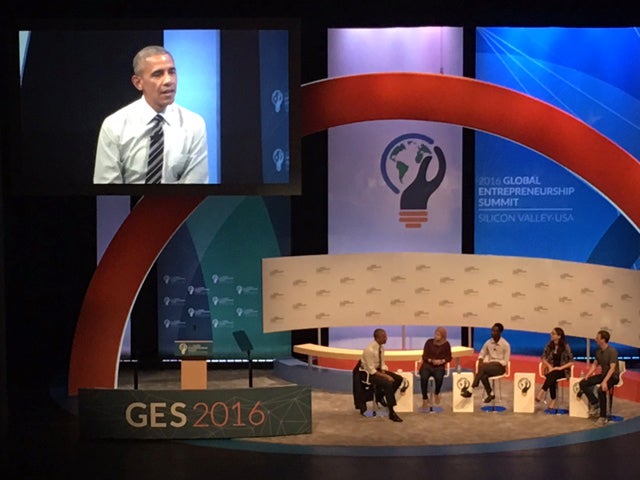 President Barack Obama on stage at the Global Entrepreneurship Summit with Mark Zuckerberg and entrepreneurs.

Electricity and other infrastructure are often unreliable. Business training and mentors are scarce. Funding is hard to come by. And government regulations may pose unnecessary hurdles to launching a business, protecting intellectual property or conducting trade.

The World Bank Group’s participation at the GES helped showcase various efforts to support entrepreneurs from across the world to overcome these barriers to growth and to scale their innovative businesses.

These included several initiatives of the Trade and Competitiveness Global Practice focused on building favorable ecosystems through innovation hubs, training programs for emerging startups, and a global network of business incubators in the clean-tech, digital and agribusiness sectors.

Several entrepreneurs from this network shared their experiences at the event. Kenia Mattis, one of the entrepreneurs who participated in the eight-month Women Innovators in the Caribbean (WINC) Acceleration Program, won $15,000 at the summit’s “Spark the Fire” pitch competition for her literacy startup ListenMi. In many Caribbean countries, as many as 40 percent of students are underperforming or failing in their literacy exams, Mattis said. With support from the WINC program, she’s drawing from her background as a songwriter to build and launch a web app that boosts literacy through interactive games and animations.

Charity Wanjiku, co-founder of Strauss Energy, was also a finalist in the pitch competition. With support from the World Bank Group’s Kenya Climate Innovation Center, Charity and her brother Tony are commercializing solar cells — or “solar tiles” — that can be easily integrated into walls, windows and roofs. Unlike traditional installations, their system can feed unused electricity back to the national grid, generating much-needed income for poor households. Their idea has the potential to change the way millions of people meet their energy needs, while also helping the country reduce harmful CO2 emissions. One of the most difficult thing in Africa is when one is initiating a new venture. There are alot of hurdles one has to crossed,and it is often difficult for a beginner to do so. In the meantime, we must give entrepreneurship a new dimension to accommodate the participation of everyone who is determined to take the course of private ownership be it a man, a girl or a minority.Registration should be simplified,access to credit should be less red taped, and there should be a sufficient training for prospective entrepreneurs