On the International Day of Family Remittances: the Greenback Runmittance Treasure Hunt in Berat 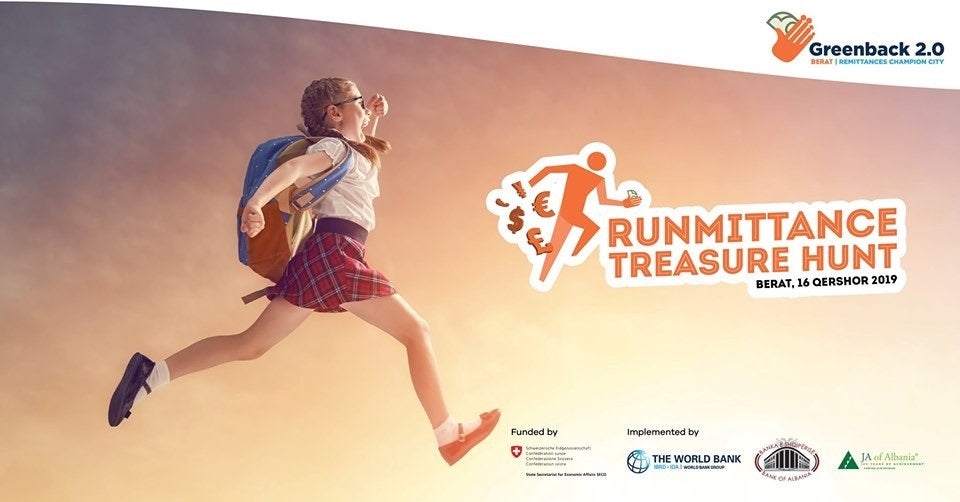 In 2015, the UN has adopted June 16 as the International Day of Family Remittances (IDFR) to raise awareness about the contributions of migrants to their families’ lives and the importance of remittances to the receiving countries. Towards these objectives, the International Fund for Agricultural Development (IFAD), as custodian of the IDFR, is supporting the #FamilyRemittances Campaign 2030, and is inviting stakeholders to endorse the values the Day represents and to showcase their engagement.

On June 16, 2019, the World Bank Project Greenback team observed the International Day of Family Remittances in Berat, Albania, a Greenback Champion City, with a Greenback Runmittance Treasure Hunt. More than 150 high school students and their teachers participated in this fun learning activity following a predetermined trail with multiple pit stops. In every stop, the participants solved a financial services riddle, receiving a financial education crash course on some specific services, and moved on to the next. The event was funded by the Government of Switzerland, and was jointly organized by the World Bank, Bank of Albania and Junior Achievement in close collaboration with local authorities and the Ministry of Education. The Runmittance aimed to create awareness in Berat and the surrounding area about remittances and financial services.

Remittances are vitally important for the Albanian economy: Albania has 1.2 million migrants – 40 percent of current population, and the value of inward remittances was estimated to be larger than 10 percent of GDP in 2018, exceeding foreign direct investment.

On average, remittances represent more than one-third of household income in Albania. And remittances primarily contribute to purchases of basic household needs – groceries, consumer goods, paying for utility bills, and so on. In fact, more than 60 percent of Albanian families who receive remittances would not be able to cover basic family needs without remittances. At the same time, it is quite costly to send money to Albania: on average, an Albanian migrant pays slightly less than $20 to send $200 home.

Effectively channeling and managing remittances is an ongoing challenge for families in Albania. A large portion of remittances is sent via unregulated channels due to lack of trust, information or financial education. Also, high costs of regulated channels limit options and lead to risky choices. There is little guidance on long term planning so very few families can make effective use of the funds they receive. Most are excluded from the regulated financial sector and ultimately perpetually depend on remittances.

In Albania, Berat is one of the cities where these concerns are the most pronounced. A number of families in Berat receive remittances from migrant relatives in Italy, Greece and US which constitute a sizable share of their incomes.

On June 16, at the Greenback Runmittance Treasure Hunt in Berat, there was a lot of excitement. While the concept of receiving money from family members abroad was known to students who participated, some learned the term “remittance” for the first time. And the International Day of Family Remittances was definitely something new for almost all of them… But all were eager to start the trail as soon as possible, and with their enthusiasm, the Treasure Hunt was over in an hour with all riddles solved.

The Treasure Hunt is an example of the Project Greenback approach by the World Bank, which was developed a few years back. Project Greenback has been evolving over time as it has been implemented in a number of countries. In essence, Project Greenback uses an innovative bottom-up approach to remittances reform: working locally to promote a healthy marketplace globally. It promotes change inspired by the real needs of the ultimate beneficiaries of remittances – that is, the migrants and their families at home.