Kurdistan Regional Government: Toward inclusion of women in the economy

Many governments in the Middle East and North Africa are facing political, security and economic instability. The Kurdistan Regional Government (KRG) has been fighting and striving for stability for decades, facing many hurdles and political challenges for its very survival. KRG, which represents the Kurdistan region in northern Iraq, has notched up some successes since it achieved full autonomy in 2005. Its reform agenda is full and the will to change is sincere. The World Bank Group is supporting KRG to seek solutions and implement strategies toward socioeconomic development and growth.

During our most recent mission, in December, as we walked through the souk in Erbil, the capital of KRG, we noticed that women were only the shoppers and sometimes the bill-payers in restaurants – but rarely did we see women who were shopkeepers.

That's not surprising, since women in Kurdistan barely participate in economic activity. In fact, the female labor force participation rate is among the lowest in the region, and in the world in general, at only 11 percent[1]. Interestingly, only about one out of 100 working-age women in Kurdistan are employed in the private sector. 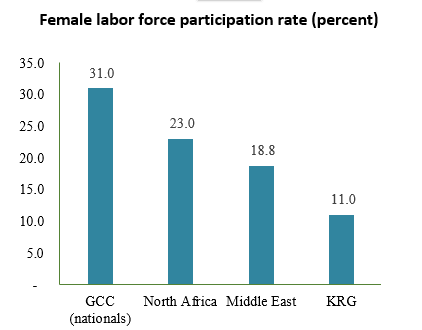 Why is it that KRG women barely participate in the labor force? And why is the representation in the private sector very low?

In an effort to better understand this phenomenon, we conducted interviews and held discussions with civil society organizations, representatives from the private sector and government officials. We found two types of constraints facing women: first, laws and regulations; and, second, social norms.

Legislation:
Why does it matter?
The Women, Business and the Law’s 2016 data (WBL) found that empowering women to participate in the labor market can benefit the entire economy. Restrictions on women’s employment don’t only affect women. After examining laws and regulations in 173 economies, the report found that the gender wage gap is smaller in economies where there are no restrictions compared to economies where there is  at least one restriction.  The 2016 Getting to Equal Report also finds that providing incentives for women to work leads to greater participation in the labor force. For example, more women reported received wages (that is, they worked in the formal sector) in economies where the government provided or subsidized child-care services.

Social Norms: Why does that matter?

The Voice and Agency Report finds that social norms (in addition to legislative constrains) also limit or prevent women from joining the labor force. That factor contributes to shaping women’s and men’s roles in the household, as well as their economic contribution. Legal barriers and social norms interact in many societies, putting a greater burden on women to be economically active. This requires action by the government, NGOs, communities and even individuals. Norms can be modified if they are supported with evidence. In a study covering eight economies, cited in the Voice and Agency Report, it was found that men are 50 percent more likely to prevent acts of violence in countries where they were informed about laws on domestic violence.

What is KRG doing to promote women’s employment?

The Kurdistan Region of Iraq 2020: a Vision for the Future sets out key policy priorities to achieve, over the next five years, a better future for KRG. Vision 2020 lays out four main pillars:
The World Bank team is working with KRG to achieve these four main pillars by providing technical assistance and by aiming to recommend strategies to implement the main policies set out in Vision 2020. Strategies range from strengthening existing social security laws and institutions to empowering women’s economic inclusion and girls’ education.

What are the next steps?

KRG is working with the World Bank team on legislative and institutional reform. Meetings and high-level discussions are taking place with parliamentarians and other government representatives to finalize strategies to boost women’s employment and to raise the awareness on the impact of women’s employment.  Inclusion of half of society will affect not only households, but also entire economies. All it takes is the willpower for change. I'd like to head back to the souk in Erbil in a few years, and I'll hope to see women actively and gainfully employed there.
[1] World Bank team analysis of KRG Labor Force Survey 2014 Round 2 and ILO/UNDP (2013) Rethinking Economic Growth: Towards Productive and Inclusive Arab Societies