High-risk areas for natural disasters are home to 5 billion out of the 7 billion total people on our planet.

Overall global losses from natural disasters such as floods, landslides or earthquakes amount to about $300 billion annually . A rapid and early response is key to immediately address the loss of human life, property, infrastructure and business activity. 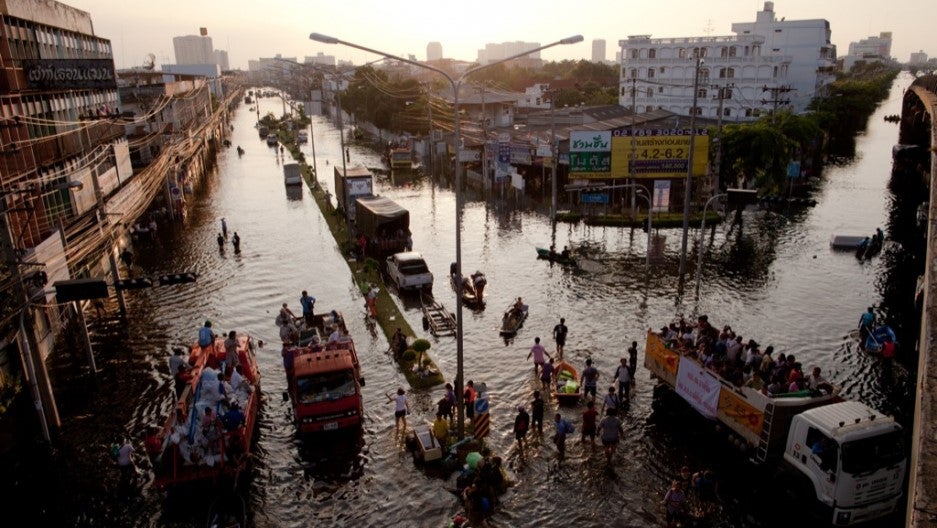 Severe flooding occurred during the 2011 monsoon season in Thailand, resulting in more than 800 deaths. About 14 million people were affected, mostly in the northern region and in the Bangkok metropolitan area.

After such natural disasters, it is important that governments rapidly address recovery efforts and manage the financial aspects of the disaster’s impacts. Natural disasters can cause fiscal volatility for national governments because of sudden, unexpected expenditures required during and after an event.

This is especially critical in emerging-market economies, such as those in Southeast Asia, which have chronic exposure to natural disasters. To conserve and sustain development gains and analyze societal and financial risks at a national or regional scale, it is also critical to understand the impacts of these disasters and their implications at the socioeconomic, institutional and environmental level.

Financed by the Rockefeller Foundation, this World Bank Group’s Disaster Risk Financing and Insurance Program (DRFIP) and Columbia University’s Earth Institute joint project aims to define an operational framework for the rapid assessment of flood response costs on a national scale.  Bangladesh and Thailand serve as the initial demonstration cases, which will be expanded to other Southeast Asian countries such as Cambodia, Lao PDR, Myanmar and Vietnam.

In Thailand, multiple tropical storms struck the country from May to October 2011, resulting in destructive floods in the northern region and the greater Bangkok metro area. Actual seasonal rainfall that year was between three to 10 times the country’s historical average. Despite numerous dams along the Chao Phraya River, the immense volume of rainfall led to severe, prolonged flooding that caused significant damage. The World Bank estimated that total losses from the flooding was about $46 billion, most of it from property damages to manufacturing plants located near Bangkok. Thailand, an upper-middle-income country, took the following actions to reduce future disaster impacts:

While other countries in the Southeast Asia region may have a similar exposure to flood risk, they may benefit from financial capacity and technological expertise to exercise similar options for risk mitigation or relief in the aftermath of a natural disaster. Ground-based data in such settings may often be difficult to assemble to assess the risks in a comprehensive way.

The project’s approach is based on the combination of remote sensing, statistical analysis of rainfall, and economic assessment.  Characterization of flood severity, in terms of extent and depth, is based on processed satellite imagery data. Radar and optical land cover observations (largely derived from the European Commission’s Copernicus constellation of Sentinel satellites) are used to detect flood water on previously dry land areas. Those maps are then superimposed with population data from various sources to produce a consolidated, near real-time view of the number of people affected by floods. In addition, when coupled with economic analysis, this rapid assessment tool provides a snapshot of losses across a variety of sectors, including crop losses and damage to residential buildings and infrastructures.

With these satellite maps, for example, we can study the likelihood of multiple catastrophic floods (possibly with different spatial footprints) across a specific country during a given year. Additionally, we can see how state-of-the-art tools for remote sensing, hydrologic modeling, climate prediction and assessment, and field surveys could be integrated into a single measurement point.

Because of the highly volatile and difficult-to-model nature of flood-risk scenarios, this project specifically addresses the quantification of uncertainties involved, which will help understand the applicability and limitations of the results produced. Certain types of flooding, for instance, such as rapid onset floods in urban areas, might not be accurately captured by satellite technology, due to limited time coverage or image resolution. But others, such as large-scale riverine floods during the monsoon season, do lend themselves nicely to large-scale, near real-time monitoring from direct satellite measurement.

The primary objective of the initial phase of the project is to produce a methodology and design an index to monitor and capture flood severity and frequency through the use of satellite imagery combined with rainfall data. The next phase will be to ensure the robustness of the remote sensing-based methodology and to convert it into a near real-time tool. Over time, this tool could serve as a basis for the development of risk-transfer products covering emergency response costs.

Just a few weeks ago, the project team from Columbia University’s Earth Institute, based in New York City, and the DFRIP team, met in Washington to conduct an assessment on the first phase of the project. The team also hosted a lunchtime presentation to update the DRFIP Community of Practice on their project’s progress.

“Of all the different natural hazards, floods seem to be, on average, the type of natural disaster which causes the most damage  to life and development gains,” said Upmanu Lall, Director, Columbia Water Center at Columbia University. “What makes this complex and interesting is that there are many variables which go into assessing the loss caused by floods. In this specific project, we are looking at rainfall-induced riverine floods, as these are the most common and cause the most havoc. Through this project, we are trying to understand how a developing country can quickly respond in the aftermath of a disaster like this and how can we create a methodology to make this response easy for them,” added Lall as he presented an overview of the topic, including future trends.

“At this point, we are trying to evaluate the applicability of remote-sensing data to near real-time flood monitoring,” said Antoine Bavandi, a DRFIP financial sector specialist who leads this project. “Recent satellite technology can be seen as a potential game-changer in this field, and we are exploring how to best leverage their potential for the benefit of the governments we advise. There are, however, a number of technical hurdles to overcome, and practical issues to resolve, before an operational product can be developed and rolled out to financial markets.

“These preliminary results we’ve seen are promising and options to combine satellite-based measurements with traditional hydrologic model-based approaches are also being explored. The longer-term objective is to help developing countries make risk-informed decisions on their disaster relief financing,” he added. 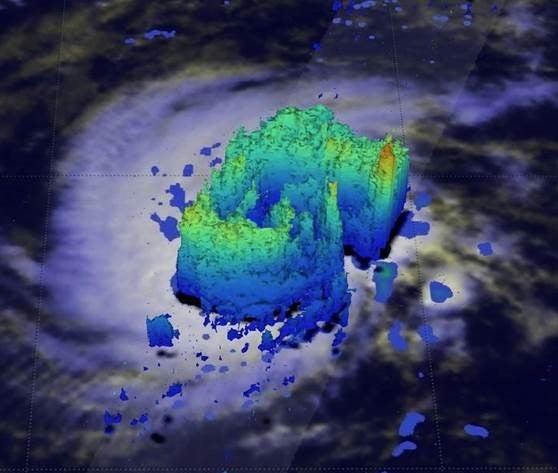 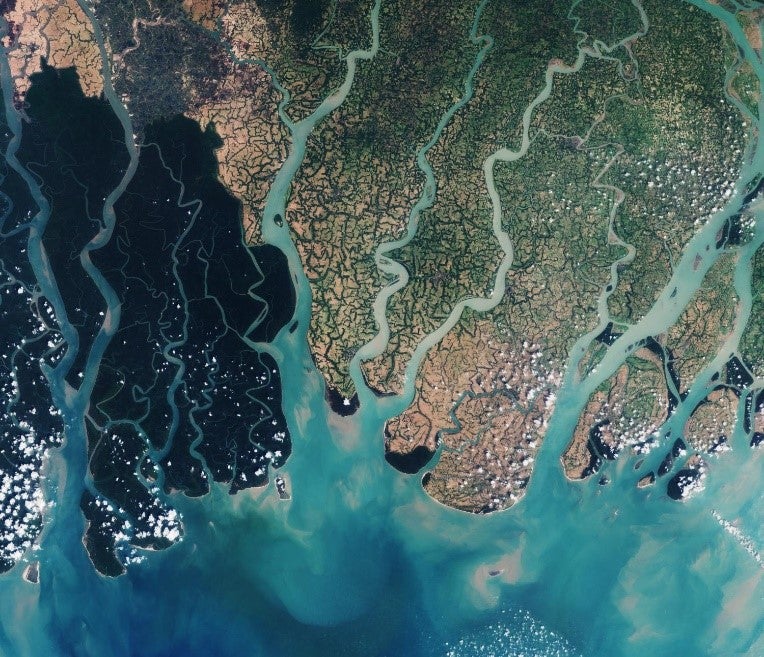 A view of the eastern part of the Sundarbans in Bangladesh showing seasonally flooded river basins (European Space Agency, March 2016).

Recognizing the need for rapid and early response to disasters, the World Bank Group’s Disaster Risk Financing and Insurance Program (DRFIP) continues to invest in research that examines the latest in state of the art research and technology.

To help developing countries address the potentially high cost from disasters and climate shocks, the DRFIP develops strategies and solutions that provide financial protection against climate and disaster risks  for governments, businesses, and households. The DRFIP provides analytical and advisory services, convening services, and financial services to over 50 countries worldwide seeking to develop and implement comprehensive financial protection strategies. To view our introductory video on disaster risk financing, click here. Director of the Columbia Water Center, and the Alan and Carol Silberstein Professor of Engineering at Columbia University