Pension funds can play a critical role in combating climate change by providing much-needed financing—and the reasons to invest are quite compelling.  The transition to limiting global temperature increases to 2 degrees Celsius is expected to yield $2.1 trillion in global “green” investment opportunities for investors. On the other hand, if institutional investors do not act, they face a potential portfolio value loss of $10.7 trillion triggered by the effects of rising temperatures.

While all pension systems face material risks resulting from climate change, some pension systems will be more vulnerable than others. To identify such risks and challenges, a team of students from the School of International Public Affairs (SIPA) at Columbia University has recently collaborated with the World Bank to create a Pension Climate Risk Heatmap. The researchers also looked at the regulatory environment in which the pension funds operate as an important counterpart to the heatmap, to find out whether the necessary regulatory measures are being put in place by countries to help mitigate this climate risk. The results—along with recommendations to pension funds and regulators—are now available in the report Pension Systems & Climate Risk: Measurement & Mitigation.

Overall, the analysis indicates that pension funds are vulnerable to climate risk in varying degrees and forms.

European countries such as Italy, Latvia, Lithuania, Slovenia, and Sweden have the lowest pension fund climate risk—in part because all of them have a much lower percentage of pension assets relative to GDP, but also because these countries have higher levels of diversification of assets including small percentages of assets held domestically. They also score relatively well on the Notre Dame Global Adaptation Initiative Index (ND-GAIN), which scores 181 countries across 45 indicators on their vulnerability to climate change and ability or readiness to adapt.

Perhaps unsurprisingly, small island economies have the highest levels of pension-fund climate-risk scoring relatively poorly on every measure. In addition to facing high country climate-risk as small island developing states (SIDS), their pension funds constitute a large percentage of GDP and hold most assets domestically—100 percent in the case of Vanuatu, 93 percent in Fiji, and 87.2 percent in Papua New Guinea. Similarly, South Africa has one of the highest levels of pension risk overall and compared to other African countries. Most South American countries score medium to high risk, while Asian countries, broadly defined, fare relatively better compared to other regions. 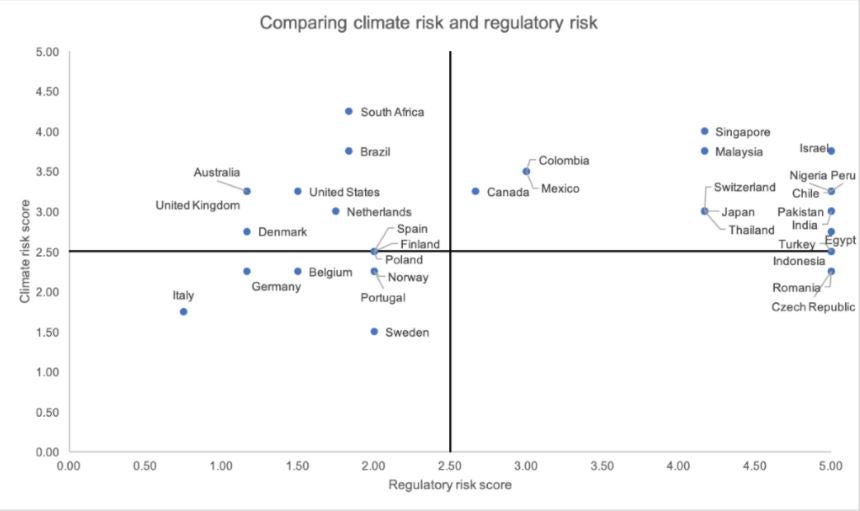 The report urges pension funds to take into consideration environmental, social, and corporate governance (ESG) aspects as part of their quest for financial returns. These are some recommended actions to pension funds regulators to accelerate this important change:

Given the long-term nature of their liabilities and investments, pension funds must address the climate change risks that we are already facing today and will likely increase in the future. They are also in a position to take advantage of the investment opportunities that will arise. We hope this paper will help both funds and regulators to look at this challenge in a new way.