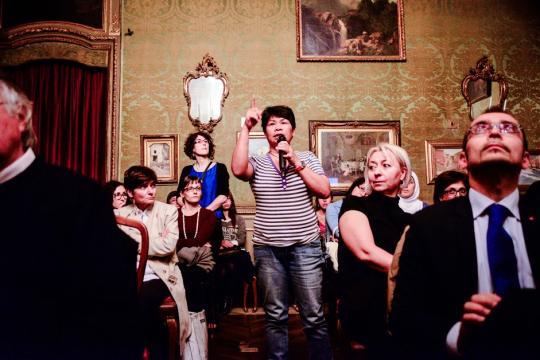 A team from the World Bank's service line on Financial Infrastructure, hosting the launch event, was thrilled to welcome a room full of migrants, market paricipants, public officials, policy researchers and private-sector observers.

Since March 2013, in partnershp with the Turin city government, the World Bank team has been preparing for the launch of Project Greenback 2.0, which aims to foster the development of a sound and efficient market for remittances. The project pursues an important new approach: It focuses on remittance senders, and its priority is meeting their needs.

In the first months of our efforts in Turin, we have been working on a survey among remittance senders, and we have been mapping and monitoring the services that are available to them when they seek to send money home. The survey focused on Romanians, Moroccans and Peruvians – the most numerous immigrant groups in Turin, who together account for more than 60 percent of the city's immigrant population.

We were impressed to see that about 80 percent of respondents have at least one bank account. On the other hand, less than 6 percent of them send money to their home countries from their bank accounts, and 83 percent of respondents use a money transfer operator (MTO) as their preferred provider. It seems to us that there is an open channel that is not being used to its full potential, thus reducing the level of competition in the marketplace.

Our researchers approached several remittance service providers, posing as customers and inquiring about service conditions and pricing. Too often, we found that accurate information was not available, or that staff members were not aware of the products offered by their own company. In some cases, it was even suggested that potential customer should use a competitor’s service.

The perceived average cost per transaction, expressed as a percentage of the amount sent, is around 3 percent. The international "5x5 Objective," which aims for the reduction of the average total cost of remittance prices to 5 percent, would already have been achieved if the perception of respondents to our survey in Turin were accurate. Unfortunately, their perception does not reflect the real cost: The World Bank Remittance Prices Worldwide database estimates that it is over 7 percent.

The majority of respondents are apparently not fully aware of all the elements of the cost of sending remittances: They generally believe that the only cost is represented by the fee. Only 36 percent of respondents are aware that the total cost includes other components. Remarkably, the percentage drops to zero when money is sent through a bank. This fact confirms that transparency of pricing is an issue of serious concern for remittance services.

Turin is the first Remittance Champion City. There will be more very soon: Montreuil, France, is already lined up. The Remittance Champion Cities will be laboratories where we plan to show how the issues related to remittance transactions can be addressed, and to demonstrate how remittances can be leveraged to increase financial inclusion and promote development.