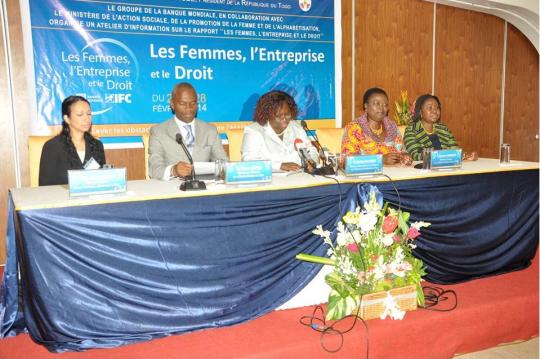 On February 27, a high-level regional workshop kicked off in Lomé, Togo, with the participation of Ministers of gender affairs and officials from 11 economies from West and Central Africa focusing on the World Bank Group’s Women, Business and the Law 2014: Removing Restrictions to Enhance Gender Equality report. A welcome dinner prior to the official opening of the event revealed the dynamic nature of gender affairs Ministers – all women – and the common realities and issues facing their nations. Most were meeting for the first time in a unique experience that enabled sharing stories and views about laws, cultural norms and traditional roles within the family in prelude to the official discussions.

The opening remarks at the workshop reflected well the importance of gender equality for the region. In welcoming the event, Mr. Hervé Assah, the World Bank's Country Manager for Togo, noted that “underinvesting in the human capital of women is a real obstacle to reducing poverty and considerably limits the prospects for economic and social development.” Those concerns were echoed by the Minister of Social Action and Women and Literacy Promotion in Togo, Mrs. Dédé Ahoéfa Ekoué, who highlighted the importance of women’s participation in society and the economy, both in Togo and worldwide. The tone was thus set for this two-day event, which aimed at both highlighting recent reforms enacted by countries in the region and promoting the sharing of experiences, challenges and good practices among the participants in promoting women’s economic inclusion.

There is certainly much to highlight and share over these two days and beyond. Over the past two years, several Sub-Saharan African economies passed reforms promoting gender parity and encouraging women’s economic participation. For example, Togo reformed its Family Code in 2012, now allowing both spouses to choose the family domicile and object to each other’s careers if deemed not to be the family’s interests. Côte d’Ivoire equalized the same rights for women and men, and also eliminated provisions granting tax benefits only to men for being the head of household. Furthermore, Mali enacted a law allowing both spouses to pursue their business and professional activities and a succession law equalizing inheritance between husbands and wives. While the pace of reform has been accelerating in the region, it is not a recent phenomenon. In fact, Sub-Saharan Africa is the region that has reformed the most over the past 50 years: Restrictions on women’s property rights and their ability to make legal decisions were reduced by more than half from 1960 to 2010.

Nonetheless, there is still progress to be made and common hurdles to overcome. Over the course of the discussion, representatives from Benin, Burkina Faso, Burundi, the Republic of Congo, the Democratic Republic of Congo, Côte d’Ivoire, Guinea, Niger, Senegal and Togo discussed relevant topics such as the laws in the region, the impact of social and cultural norms, women’s access to finance, professional equality in the labor market, the role of women in trade, and women and the informal sector. Country experiences shared by government officials were complemented by the relevant views of microfinance institutions, women entrepreneurs, regional banks, women’s rights organizations, and Togolese participants.

Addressing cultural norms
A common perception was the impact of cultural norms, based on communal traditions, on advancing gender equality. But countries had good practices and experiences to share in addressing some of these issues and how they are making progress. Côte d’Ivoire, for example, reported good results with a campaign against female genital mutilation that raised awareness at the local level by going from village to village throughout the country. Niger, meanwhile, found a creative way to try to address the sensitive issue of child marriage by increasing the years of education to keep girls in school longer.

Another interesting perception was how the law sends out signals of a woman’s worth, which is often also reflected in local proverbs. In local dialect, a popular saying in the Democratic Republic of Congo that “a woman is a stranger” shows the view that women are not to be trusted, particularly with property. But education and awareness-building can help change these perceptions. Studies such as the forthcoming report on Voice, Agency and Participation by the World Bank’s Gender and Development Department can shed light on the interaction of social and cultural norms and women’s economic empowerment, and potential drivers of change.

Approach to reforms and the crucial element of implementation
Different experiences were reported in enacting legal reforms. Despite some setbacks, Côte d’Ivoire passed important reforms within a short time frame and is focusing on implementation through awareness and capacity-building. Mali is continuing its reform process by engaging with local and community leaders. And Niger is building the foundation for reform by conducting dialogue with a wide range of stakeholders. Other countries also mentioned initiatives they have undertaken in looking at reforming their respective family codes, which in many cases remain the legacy of the French Napoleonic Code.

A crucial point raised by almost all the countries was that even when laws on the books are equal, implementation can prove challenging. Especially in societies with entrenched cultural norms, the engagement of the community and judges, including customary chiefs, is key to achieving greater equality in practice. Country experiences showed the importance of raising awareness and engaging the population.

The dual themes of local engagement and dialogue prior to reform, along with capacity-building and implementation support after reform, were repeated by participants throughout the two-day event. Both themes have been prevalent in the host country of Togo, where the work of local advocates led to a reform in the Togolese Family Code: The reform reversed a provision stating that customary law applied in inheritance matters unless an opt-out declaration was made. Meanwhile, a training for judges has led to greater implementation of human rights provisions in accordance with Article 50 of the Constitution.

Additionally, translating gender equality in the law into equal access for women may require further incentives. The Minister of Benin, for example, mentioned that while discriminatory provisions have been removed from the laws, inequality still persists in women’s access to decision-making positions. In fact, the issue of women’s representation in parliament was a common topic of concern raised by the countries in the context of achieving gender equality in practice, as the region has already started putting in place quotas for women’s representation.

Point well taken
While many of the issues are common to the countries, so is the commitment to continue promoting gender parity and encourage greater participation of women in the economy. And, as well noted by Minister Dédé Ahoéfa Ekoué, “Economic growth does not necessarily lead to reforms ensuring greater economic access for women, but women’s access to their rights and legal gender equality does help leverage women to support economic growth for the country.” The Minister added that the regional workshop was perfectly in line with their national theme for International Women’s Day – which will be marked this Saturday, March 8: "Economic Empowerment for Women, Progress for All."