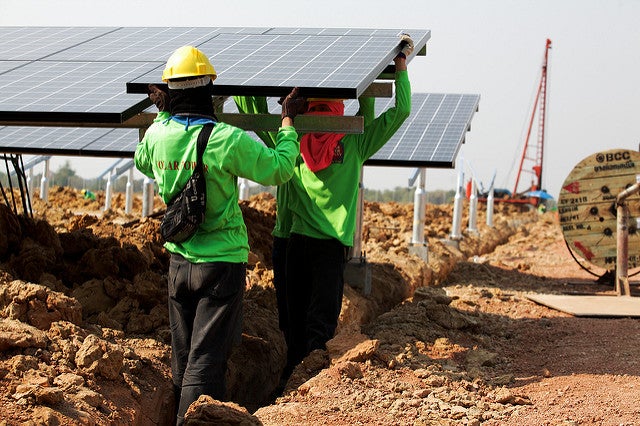 Following the Paris deal on international climate change, governments are beginning to explore new financing mechanisms for investing in the growing low carbon economy. Over the next decade sovereign wealth funds (SWFs) could become an important game changer in green investing . Recognizing the untapped potential of SWFs, two key questions emerge: how can SWFs increase their exposure to green asset classes? And what are the constraints?

Investors and financial institutions are becoming increasingly aware of the risks associated with fossil fuel projects and are showing growing interest in green bonds and other financing tools that facilitate investment in low-carbon energy solutions.

Being patient investors, with longer term investment horizons than many others in the financial services sector, SWFs could become catalysts for implementing the December 2015 Paris Climate Agreement . In the November 2016 annual meeting of the International Forum of Sovereign Wealth Funds in Auckland, participants highlighted that SWFs are particularly well-positioned to become trailblazers in green investment. The majority of members are oil-based SWFs which are looking to economic diversification of their finite carbon wealth into industries and sectors that would yield broader societal, economic and financial benefits.

Some governments are already looking to move away from fossil fuels. The recent legislative proposal by the Irish Parliament to divest the Ireland Strategic Investment Fund (ISIF), a US$9 billion SWF, from fossil fuels is particularly significant.  This vote could make Ireland the first country in the world to divest its sovereign wealth fund from fossil fuels.  It is instructive to note that while Norway SWF exercises a proscriptive policy (i.e. ban, delist from stocks) in certain industries in which it invests, Ireland, if the divestment law is enacted, would present a paradigm shift in the investment arena by completely divesting its SWF from investments in the  oil/gas sectors.

Even oil-based economies are starting to explore diversification into low carbon investments . For example, in January 2017, Abu Dhabi’s green investment vehicle Masdar – owned by SWF Mubadala – acquired a 25% stake in Hywind, a UK wind farm, following an earlier ownership increase to 80% in Shams Power – a world leading concentrated solar power plant.This is part of a strategy by Abu Dhabi to move away from reliance on hydrocarbons and to establish itself as a “global center of excellence in the renewable energy and clean technology sector”.

In another example, France has recently issued its first “green bonds” with a record US$7.5 billion sale and appears to have created a genuine market in renewable energy bonds. By becoming the first country to issue a sovereign green benchmark bond, France has confirmed its role as a driving force for the implementation of the goals of the Paris climate deal.

How to increase SWF exposure to green investment: vehicles and structures

Debt-based vehicles, notably green bonds, require the existence of markets for transactions. China is the largest issuer of climate aligned bonds followed by the US, France, and the UK. Although the green bond markets are growing strongly, they are starting from a relatively low level. The Climate Bonds Initiative estimates that outstanding climate-aligned bonds grew by 14% between 2015 and 2016.However, less than 1% of global bonds are estimated to be labelled as green.

Given the limited scale of the green bond market, large institutional investors such as SWFs need to look for alternative and complementary opportunities for increasing their exposure to green assets. One option is listed green equity. IPOs in the renewable energy sector are often fund-style structures involving a portfolio of operating renewable energy projects bundled together. Such structures can offer a stake in low-risk already operating renewable energy assets with stable revenue streams (providing certain bond-like features).However, their lack of a track record can discourage investments from long term oriented SWFs.

An alternative option is through private equity. Unlike listed equity there is no need for liquid primary or secondary markets. This makes private equity particularly attractive for green energy projects in countries with shallow capital markets, notably developing countries.

However, such a private equity approach requires particular asset-related skills and knowledge and these tend to vary from country to country with different markets and regulation. SWFs have limited expertise with private equity investments in climate assets. Furthermore, developing this expertise would involve costs associated with the deal identification, deal execution and deal management.

Another challenge relates to the problem of scale. In order to reduce transaction costs, large institutional investors such as SWFs prefer to make investments at a larger scale. However, many green projects such as distributed renewable energy in cities, climate adaptation measures for buildings and district-level public transport projects tend to be at a smaller scale. One way to increase scale is to create pooling mechanisms or co-investment platforms, such as the Pension Infrastructure Platform in the UK, which aggregate smaller projects into larger investment programs.

What is clear is that SWFs will need to collaborate with actors in the private and public sectors if green investments are to continue growing  as an asset class. Inevitably this raises new challenges, new ways of thinking about investments and new skills in the sector. Consequently, those SWFs with the drive and innovation to respond to the opportunities in the low carbon economy are likely to be successful. At the same time, SWFs should play a stronger role in advising governments on how to shape effective policies that encourage green investments and shape new low carbon markets where investments flourish.

This is one in a series of occasional blog posts where we invite external experts to share their experiences about issues in international development. This contribution on exploring new financing tools for investing in low-carbon energy solutions comes from experts from the London School of Economics and Tufts University.