Call it “secular stagnation,” or the disappointing “New Mediocre,” or the baffling “New Normal” – or even the back-from-the-brink “contained depression.” Whatever label you put on today’s chronic economic doldrums, it’s clear that a slow-growth stall is afflicting many nation’s economies – and, seven years into a lackluster recovery from the global financial crisis, some fragile economies seem to be lapsing into another slump.

As policymakers struggle to find a plausible prescription for jump-starting growth, a tug-of-war is under way between techno-utopians and techno-dystopians. It’s a struggle between optimists who foresee a world of abundance thanks to innovations like robot-driven industries, and pessimists who anticipate a cash-deprived world where displaced ex-workers have few or no means of earning an income.

To add a bracing dose of academic rigor to the tech-focused tug-of-war, along comes a data-focused realist who adds a welcome if sobering historical perspective to the debate. Robert J. Gordon, a macroeconomist and economic historian at Northwestern University, takes a longue durée perspective of technology’s impact on growth, wealth and incomes.

Gordon’s blunt-spoken viewpoint has caused a sensation since his newest book, “The Rise and Fall of American Growth,” was launched at this winter’s meetings of the American Economic Association. His analysis injects a new urgency into policymakers’ debates about how (or even whether) today’s growth rate can be strengthened.

When Gordon speaks at the World Bank on Thursday, March 31 – at 11 a.m. in J B1-080, as part of the Macrofiscal Seminar Series – economy-watchers can look forward to hearing some ideas that challenge the orthodoxies of recent macroeconomic thinking. His topic – “Secular Stagnation on the Supply Side: Slow Growth in U. S. Productivity and Potential Output” – seems likely to spark some new thinking among techno-utopians and techo-dystopians alike.

Gordon’s work aims to strengthen our understanding of Total Factor Productivity (TFP) – the best statistic for projecting the chances for innovation and technological progress, and thus a key calculation in designing policies to help spur growth and raise standards of living. How important is TFP? Recall the dictum of Nobel Prize-winner Paul Krugman: “Productivity isn’t everything – but, in the long run, it is almost everything.”

“Economic growth is not a steady process that creates economic advance at a regular pace, century after century,” asserts Gordon. After millennia of stagnation – with scarcely any progress in most humans’ health, nutrition, longevity or living conditions – a Big Bang of economic progress occurred with the Industrial Revolution and its follow-on decades of creativity. Transformational technologies – such as urban clean-water systems, electricity and the automobile – changed the human condition in ways that had once been inconceivable.

Yet since that Big Bang, Gordon reckons, there’s been only gradual, grudging improvement in TFP. That vital measurement has grown only very slowly since 1970 – at a rate only about one-third as fast as the pace achieved between 1920 and 1970. And that laggard pace even takes into account the efficiency enhancements unleashed by the digital-age breakthroughs that (in the starry-eyed view of techno-enthusiasts) may have opened up new horizons of prosperity.

There have been few deeply meaningful recent advances, asserts Gordon, in areas that are truly critical to universal economic well-being – and nothing comparable to the earlier leaps forward in such realms as food, clothing, housing and transportation. The era of major technological breakthroughs may be largely over: While humanity may continue to design some modest productivity-boosting innovations, none of them seems likely to be as transformational as the earlier wealth-creating triumphs. Perhaps the “low-hanging fruit” has already been harvested, leaving just slim pickings now.

Attaining higher standards of living, according to this analysis, seems destined to become ever more difficult. Perhaps even more daunting, those innovations that do manage to occur are unlikely to deliver across-the-board benefits to all of society, according to some analysts. That trend is already contributing to intensifying inequality and social-class stratification in the developed world – a fact that has been persuasively documented by such eminent economists as Thomas Piketty and Emanuel Saez.

Whetting policy-watchers’ appetite for Gordon’s March 31 lecture, the Bank’s InfoShop on March 28, in J 1-050, will host the launch of a major new work on global trends in wealth and income inequality. One of the world’s foremost experts on inequality, Bank alumnus Branko Milanovic – whose widely hailed research underscores the ominous trends detailed by the Piketty-Saez data – will present his new book, “Global Inequality: A New Approach for the Age of Globalization.” His analysis recently won praise from a reviewer in the International Monetary Fund's journal “Finance & Development”: “Especially in the United States, [Milanovic] sees little scope for reversing the ‘perfect storm of inequality’ in an era when capital is highly mobile and the rich dominate the political system. His policy prescription for our predicament — focused on equalizing endowments, especially in terms of ownership of capital and education — warrants serious consideration.”­

Gordon’s imaginative thesis, along with Milanovic’s insightful analysis, will challenge the thinking of traditionalists and will rattle the complacency of techno-utopians – making next week’s World Bank lecture and InfoShop book launch all the more provocative. 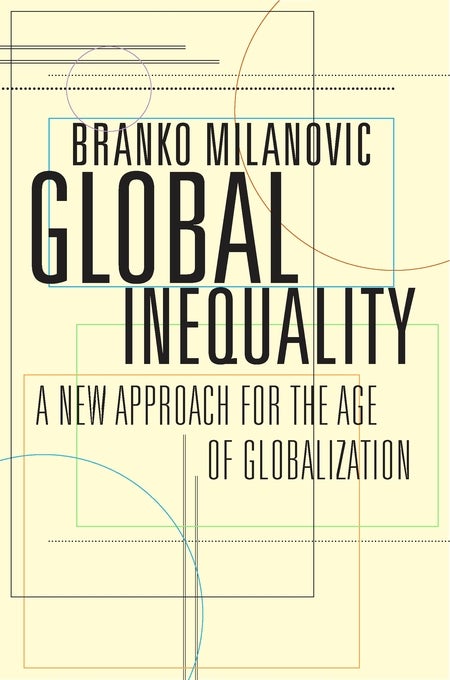