The India Paradox: Promoting Competitive Industries in a High-Growth Country 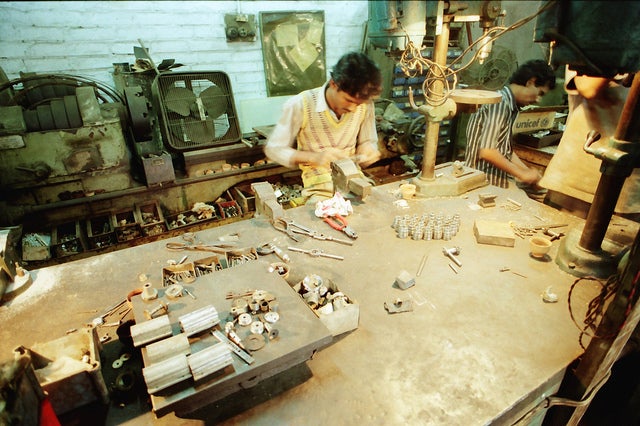 India’s economic growth rate in the past decade has been nothing short of spectacular.  With its GDP growth around 7 to 9 percent per year, India is the second-fastest-growing large economy in the world.  However, the country’s manufacturing sector accounts for a dismal 17 percent of its employment opportunities, as compared to 60 percent in agriculture and 23 percent in services.[1]This summer, the World Bank’s Indian Visiting Scholars Program* invited two leading academics from Harvard University to visit India and to articulate potential pathways to sustain the country’s growth trajectory. These 2 scholars are Ricardo Hausmann, Professor of Economic Development at the John F. Kennedy School of Government and Director of Harvard’s Center of International Development and Dani Rodrik, Professor of International Political Economy at the Kennedy School. While there, they interacted with the private sector and key policymakers, including senior officials of the Department of Industrial Policy and Promotion, the Planning Commission, and the Ministry of Finance.

Hausmann argues that diversification in the economic structure, and not necessarily specialization, may be a crucial factor for accelerating growth in India.  He observes that rich economies produce many products whereas developing economies produce few products that are also made in rich economies. This relationship exists not only between countries, but also between cities within a country.

The obvious question arises: If each product requires specific sets of capabilities, how can resource- and skill-constrained developing countries diversify? Hausmann suggests leveraging existing capabilities to develop new products that, in turn, allow for the development of more capabilities, and the production of more new products, and so on. The novel analogy he makes is that of a monkey leaping from tree to tree in the forest of potential products of the world. The closer the tree is, the easier the leap. The successful value-chain upgrade from low-value-adding business process offshoring to higher-end “knowledge process outsourcing” is a case in point.

The greater the area of the forest that an economy occupies, the more diversified it is, and thus the greater the opportunities are for growth. So how does this inform industrial development? Like entering a forest with a map to navigate the various vegetation zones, Hausmann’s methodology can be used in some cases as a frame of reference to analyze so-called “product spaces” and to offer a roadmap for policymakers and entrepreneurs to identify strategic “tree leaps” towards new products. That, in turn, helps a country develop its capabilities and occupy greater areas of the product space.

From products to people: how does industry development relate to employment?

For his part, Rodrik argues that apart from developing new products, shifts in production structure contribute to overall productivity improvements that are needed for growth.

Drawing comparisons across countries, Rodrik finds that successful countries have been able to channel labor resources to productive sectors, as well as develop sectors that absorb the type of labor that is available (for example South Korea, Taiwan and Brazil in certain industries). In India, the majority of labor is unskilled.  The challenge, says Rodrik, is twofold: to have policies that are aimed at allocating labor resources to productive sectors and developing additional sectors that will also absorb this labor.  He emphasizes that this would not only involve examining labor-market rigidities but would also involve maintaining a competitive exchange rate. In Rodrik’s view, today’s real debate is not whether to have an industrial policy but how to improve the contribution of industry to inclusive development. It cannot be a top-down process. It must be a process of collaboration, coordination, and dialogue with the private sector.

No matter how much we try to shy away from it, industrial policy is very much alive in countries like India, at both the central and the state levels. The question is how to go about it to avoid the trap of “picking winners.” While Hausmann and Rodrik championed different aspects of how industrial policy could help facilitate economic growth – one at the product-space level and the other on the exchange-rate and labor-rigidity aggregate level – both of them emphasized the importance of communication and coordination between the private sector and policymakers.  Indeed, it is important to create a process that is not political and involves collaboration, dialogue and feedback mechanisms.  As Rodrik puts it, a collaborative process should be one where government processes are embedded in, and not “in bed with,” the private sector, for it to be responsive and conducive to private-sector growth.

*Enhancing Dialogue through the Visiting Scholar's Program The Finance and Private Sector Development Network of the World Bank Group, through the Competitive Industries Practice, has been working on enhancing the policy dialogue by linking world-class knowledge to Indian policymakers. FPD brings leading academic thinkers to look at these issues in the Indian context "Hausmann argues that diversification in the economic structure, and not necessarily specialization"

I would just like to suggest the obvious. That the maximal benifit is had by both, operating in a cycle of diversification then specialisation. and not just one or the other.

As diversification spreads into new areas, and specialisation concentrates on important issues of need of the time.

Thanks for your comment. I agree with you. I also believe that in practice diversification and specialization can happen in tandem and not necessarily in a lead lag cycle. Different players in growing economies adopt different approaches. However, given the increasing economic uncertainty, diversification is also a good hedging strategy.

What is the current state of the Indian Economy and where is it headed –
While I fully understand and appreciate Hausmann’s views that diversification in the economic structure, and not necessarily specialization, may be a crucial factor for accelerating growth in India, his observation that rich economies produce many products whereas developing economies produce few products that are also made in rich economies calls for a discussion. It is true, that this relationship exists not only between countries, but also between cities within a country. What is therefore the secret of India’s economic growth rate in the past decade which has been nothing short of spectacular? With its GDP growth around 7 to 9 percent per year, India is the second-fastest-growing large economy in the world. Who is the driver for this. Before we answer this, one needs to revisit the American Economic Historian W.W. Rostow who in the sixties had suggested that countries passed through 5 stages of economic development as Traditional Society, Transitional Stage, Take-off, Drive to Maturity and High Mass Consumption., Would this today apply to India. Many development economists argue that Rostows's model was developed with Western cultures in mind and not applicable to developing countries as India as it is generalised and policy makers are unable to identify the various stages as they seem to overlap each other. It depends how you look at it. It is a growth model and we should examine if there is actual all round development to witness the 9% GDP growth. One of the contributors for this is the growing “Indian Middle Class”. While the reasons are varied, but one which has really propelled up the Indian economy ( I would say, in the last 6 years) is the growing buying power of people in the so called "Middle Income Group" which in the case of India, per my estimation, represents almost 300 million people. This is a huge market to cater to and is growing. This group is the one which is pushing demand locally and thus giving a boast to the economy. It is a life cycle change in the population group. This is the group which is spending on all goods and related services. Because of such a growth demand for goods/services, banks will certainly witness increase in their lending in the next couple of years. This fuels continuous economic growth (notwithstanding inflation) The rosy side is that when the economy grows, the equity markets become much more active and again adds for the economy growth with more people coming into the "Middle Income Group of People" or the people with buying power or cash to spend. Thus going back to W.W. Rostow, we are somewhere in between stage 3 and 4. But at this stage, one needs to be very careful. While India seems to be embarking on a high-growth strategy today, it must guard and overcome some global trends which include global warming, the falling relative price of manufactured goods and rising relative price of commodities, including energy; swelling discontent with globalization in advanced and some developing economies, the various ongoing “scams” which could eat upto 2% of the GDP, the growing “young population” which should not become a struggle to cope with and the ongoing mismatch between global problems—in economics, health, climate change, and other areas—and weakly coordinated international responses. Notwithstanding the challenges, the support of the global economy remains central for the current Indian growth story or as they call it the - The India Paradox: Promoting Competitive Industries in a High-Growth Country.