How many families own a Fiat Chrysler Automobiles 500 L (a city car)? But would you ever say it was assembled in Kragujevac, Serbia?

Or would you ever think that the BMW 5, an executive car, uses a cockpit designed in Sarajevo, Bosnia and Herzegovina?

And who has not ridden a Van Hool coach at least once? Would you believe it was made in Skopje, North Macedonia?

Hyundai cars are yet another example. Many of their wire harnesses are made in Fier, Albania, by Yura Corporation.

In Kosovo,Intertex, a textile company in Gjakova, produces protective covers for Volkswagen cars.

An upcoming World Bank Group study shows that firms in all economies of the Western Balkans (Albania, Bosnia and Herzegovina, Kosovo, Montenegro, North Macedonia, and Serbia) have integrated in GVCs, and that their GVC participation has increased over time. Moreover, some of these economies upgraded their participation into GVCs in the last two decades. For instance, Bosnia and Herzegovina and Serbia moved from commodities into limited manufacturing GVCs in 1990-2015.

However, when compared to peer and aspirational countries, such as the new European Union (EU) member states, or countries in ASEAN, the Western Balkans underperform on GVC participation. Network analysis shows that Western Balkan economies have limited connections to major hubs in the EU and the United Kingdom. Accelerating integration would bring economic benefits to the Western Balkans. The experience of new EU member states demonstrated that participation into GVCs and connectivity to major hubs can help small economies accelerate export and income growth.

Within the region, there are significant differences. Firms in Serbia, North Macedonia and Montenegro are the most integrated in GVCs, albeit in different sectors. On the other hand, firms in Albania and Bosnia and Herzegovina are the least integrated. Data for Kosovo is not available unfortunately.

Attracting more Foreign Direct Investment (FDI) would spur GVC participation. WBG research shows that FDI inflows into Western Balkans have been stagnant, on average, during the past decade, although higher than EU new member states and ASEAN countries compared to GDP. In the first half of 2019, FDI as a percentage of GDP dropped in the Western Balkans. The economic disruption caused by COVID-19 has made attracting or even retaining FDI a much greater challenge. FDI to manufacturing sectors, particularly high value added, has been limited.  In 2019, most FDI went to real estate (83 percent) and construction (12 percent). Greenfield FDI projects in the last five years have also concentrated in real estate (The Financial Times FDI Markets, 2019). Overall, the manufacturing sector still contributes a smaller share of GDP than in ASEAN and EU new member states. Manufacturing value-added as percentage of GDP is about ten percent in the Western Balkans, though in Albania and Montenegro it is five percent. In ASEAN and new EU member states it is about 20 percent.

There are at least three ways in which FDI can help the Western Balkans integrate into GVCs and boost growth, jobs, technology transfer: 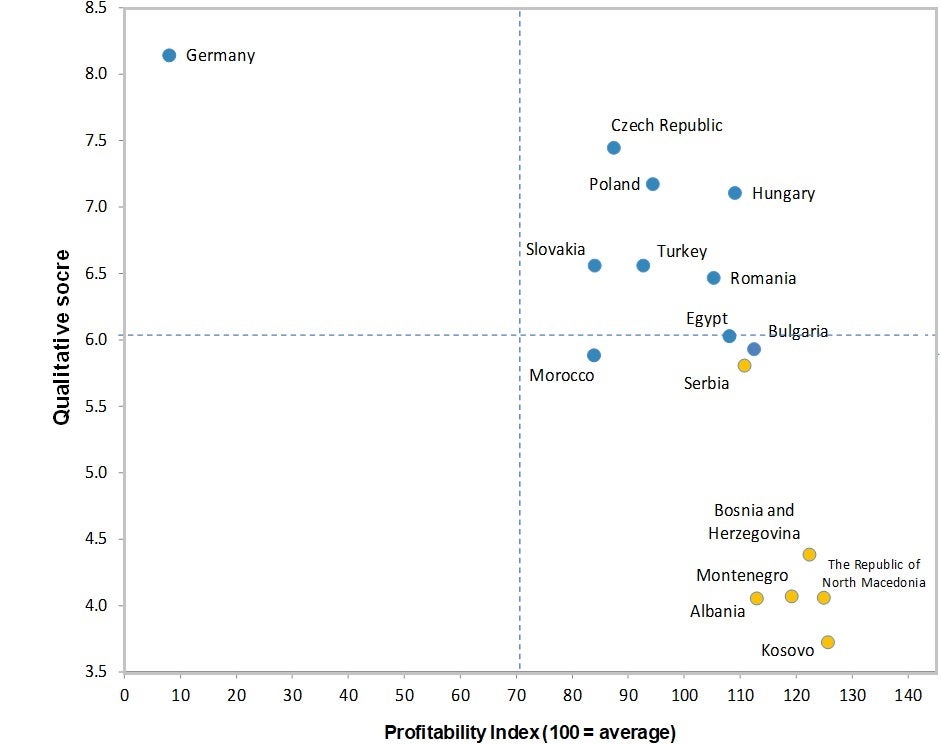 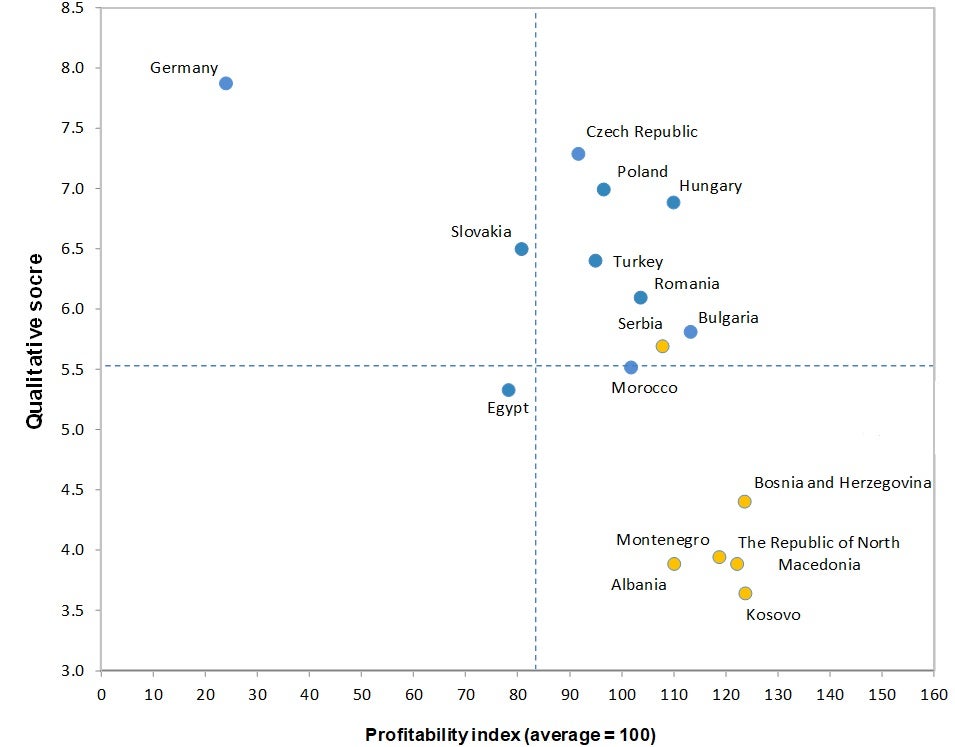 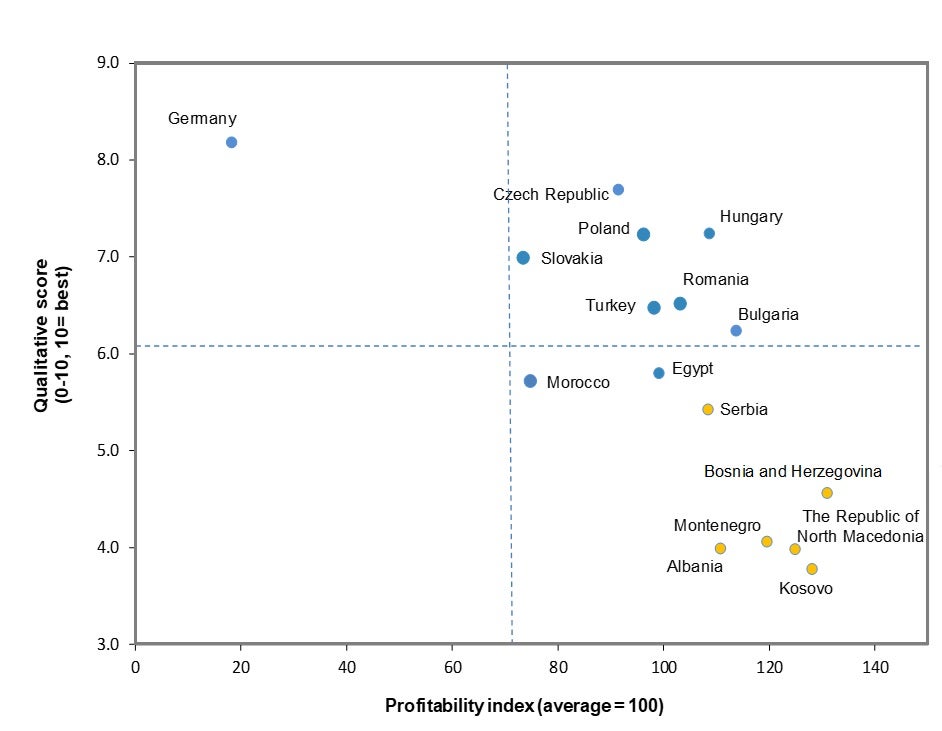 The World Bank Group’s Western Balkans Regional Investment Policy and Promotion Project (funded by the European Union and implemented in collaboration with the Regional Cooperation Council) is helping the Western Balkans attract FDI and integrate in GVCs addressing some of these recommendations. The project supports the Western Balkans with the implementation of the South East Europe 2020 Strategy and the Multiannual Action Plan to establish a Regional Economic Area. Key areas include: the establishment of a Regional Investment Reform Agenda; the horizontal implementation of investment policy reforms; and targeted investment promotion efforts.

Looking forward, the ongoing COVID-19 crisis may be both a challenge and an opportunity for FDI and value chains in the region. Global FDI was weak before the outbreak and is expected to fall more than during the 2008 financial crisis. Initial estimates suggest that the future decline in global FDI caused by COVID-19 will range from 30-40 percent to possible 50 percent (OCO Global) in 2020-2021. The main source markets of FDI in the Western Balkans (including Austria, Germany, Italy and the United States) have all been affected. The key sectors and industry segments recommended for FDI attraction are very exposed to COVID-19. On the other hand, this crisis may be leading to the “near-shoring” of some value chains, such as medical equipment and other manufactured items, including some of the Western Balkans target industry segments. Ongoing research by the World Bank Group is focusing on these developments along with the impact of COVID-19 on FDI and target value chains in the region.