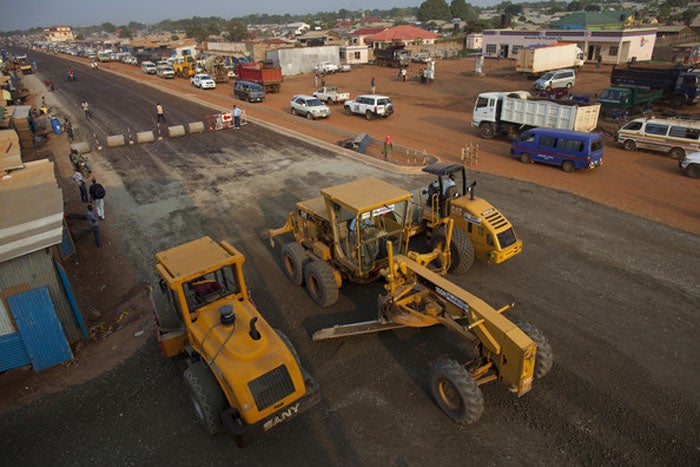 The World Bank Group continues to engage in South Sudan despite the odds, and for good reason

Tell people you work in Juba – capital of South Sudan and now the newest member of the East African Community – and more often than not they won’t know where to find it on a map. Those of us who know are often met with doubtful stares when we talk about enhancing trade and competitiveness in a country that is struggling to emerge from decades of grueling civil war, not to mention a 98 percent illiteracy rate, inadequate capacity, a maternal mortality rate of 254 for every 100,000 births and a 250 out of 1,000 infant mortality rate.

Fact is, Juba is situated in the heart of Africa, where such challenges, and the daunting figures that go along with them, exist. But look deeper and you see commitment, potential, and signs of the World Bank Group’s positive impact. In short, you see opportunity.

The World Bank Group has been working in South Sudan since 2005 to help lay the foundation for sustainable and inclusive development. The South Sudan Investment Climate Program was launched in 2007 to focus on the fundamentals of a thriving business environment, which includes the development of investment laws, business entry, operation and exit laws, and an efficient business registry.

By March 2013, the program had supported the government in enacting 16 core business laws, adopting five regulations, and introducing several more policies and strategies. Over 50 procedures were streamlined, and eight private sector support institutions were established and operationalized, including the South Sudan Business Forum, which promotes and facilitates public private dialogue, the South Sudan Investment Authority, and its one-stop shop investment centre. The program also streamlined the Ministry of Commerce and supported the reorganization of the Chamber of Commerce. A business registry was re-established, modernized, upgraded, and decentralized to two more states. The cost to register a business fell by 50 percent and time from 14 to eight days. Over 23,143 businesses (from a base of 135) were formalized, and over 23 investment certificates were issued, attracting more than $200 million in private investment to South Sudan.

The business community quickly took notice. In December 2013, the program supported the organization of the first-ever international investment promotion conference, attracting over 800 investors from 55 countries. The conference provided a platform for participants to discuss issues impacting investment in South Sudan and identify investment opportunities in all sectors of the economy, including agriculture, infrastructure and tourism. While the conference spurred optimism, it was sadly short-lived as the country slumped into a deep internal conflict only a few days after the event’s close.

While South Sudan has not fully come out of this conflict, there is reason to hope.  Besides oil, the country has abundant potential to fuel its development. gum arabic is a one example.

Gum arabic is used in the food industry as a stabilizer. If have you ever had a Coke, then you are already familiar with it. Producers harvest the gum commercially from wild trees. It is an important ingredient in soft drink syrups and "hard" gummy candies, such as gumdrops, marshmallows, and chocolate candies. Pharmaceutical drug and cosmetics companies use it as a binder, emulsifying agent, and a suspending or viscosity increasing agent. It is a key ingredient in traditional lithography and is used in printing, paint production, glue, cosmetics and various industrial applications. It is an important ingredient in shoe polish and can be used in making homemade incense cones. It is also used as an adhesive on postage stamps, envelopes, and cigarette papers.

This commodity is in abundance in three-quarters of South Sudan. There is a very high average density of 994 gum arabic trees per hectare within the South Sudan gum belt.  The estimated potential production of gum arabic is estimated at about 15,580 MT, which would make South Sudan the fourth largest producer of gum arabic in the world after North Sudan, Chad and Nigeria. Despite the conflict, it is estimated that about 150,000 families are currently involved in gum arabic harvesting and marketing in South Sudan, a number that could increase should more states become active. It is estimated that about 50 percent of the population in gum arabic harvesting areas – the majority of which are women – depend on it as their source of income.

The Trade and Competitiveness Global Practice of the World Bank Group (T&C) has the opportunity to support the development of this industry into a more advanced commercial enterprise for the benefit of South Sudanese and the country at large. Commercialization of gum Arabica would help diversify the economy away from oil, create more jobs and exportable products, and increase revenues. Specifically, T&C could assist in value chain assessment for gum arabic, including analysis of production, processing, and marketing policies; support for SMEs as well as various institutions in the value chain (such as those dealing with regulation of quality, standards, price controls, licensing, subsidies, taxation, marketing, import/export duties, levies, and quotas); and backing for capital/credit supply organizations, marketing boards, cooperatives for collection, and processing plants.

Of course, this can only happen when peace finally arrives, and men put down their guns. Or perhaps this vision of job creation could help facilitate the peace process. Could gum arabic become the number one export for the region and beyond?

An interesting fact: since fighting broke out in December 2013, both the government and opposition have preserved facilities built by private investments. This shows that South Sudanese, regardless of their political allegiance, realize that protecting investment and putting private sector at the heart of the growth agenda is vital to the country’s stability and development.

So why Juba? For all the above reasons and more. Because our work ultimately translates into the little changes that suggest an improvement in the lives of the South Sudanese and reflect T&C's contributions.

Why Juba? Because that is where our support matters the most.
Topics
Agriculture and Food
Fragility Conflict and Violence
Climate Change
Competitiveness
Trade
Countries
South Sudan
South Sudan
Regions
Africa
Series
Doing Business