Despite expectations, cities in East Asia are becoming denser 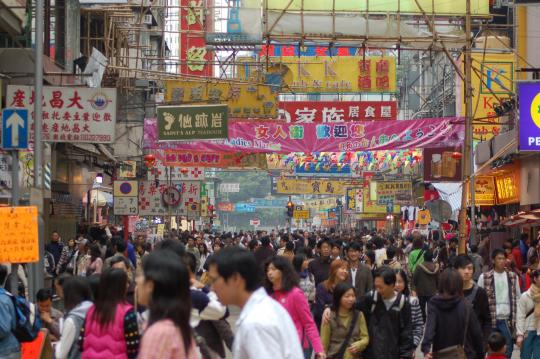 When we think of urban expansion in the 21st century, we often think of ‘sprawl’, a term that calls to mind low-density, car-oriented suburban growth, perhaps made up of single-family homes. Past studies have suggested that historically, cities around the world are becoming less dense as they grow, which has prompted worries about the environmental impacts of excess land consumption and automobile dependency. A widely cited rule of thumb is that as the population of a city doubles, its built area triples. But our new study on urban expansion in East Asia has yielded some surprising findings that are making us rethink this assumption of declining urban densities everywhere.

In most East Asian cities, population is growing faster than urban footprints

Together with researchers from the University of Wisconsin-Madison and WorldPop, we analyzed satellite imagery and population distributions across all of East Asia and the Pacific, identifying all 869 urban areas with populations greater than 100,000 people, and mapping their growth between 2000 and 2010. Using physical definitions of urban areas allowed us to avoid relying solely on official statistics on urban areas and populations, which vary in their definitions, or populations only within administrative boundaries, which often miss urban growth in surrounding areas.

It was no surprise to find that urban areas are expanding at a rapid pace: 29,000 square kilometers of new urban area were built between 2000 and 2010, at a growth rate of 2.4% a year. What was unexpected was the finding that the population growth rate for these urban areas was even higher, an increase from 579 to 778 million, at 3.0% a year. What this means is that, contrary to our assumptions, their population densities were actually increasing on average, from 5,400 to 5,800 people per square kilometer over the decade.

In a region as varied as East Asia, these regional averages call for some unpacking: 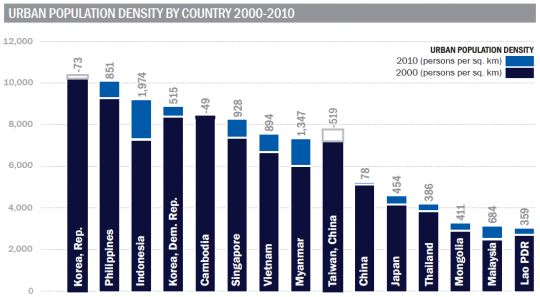 Why does East Asia appear to contradict what are often assumed to be global trends? It is hard to say for sure without further research, but it is important to note that urbanization in East Asia in recent years has been extraordinary, in terms of its scale, pace, and the driving forces at work. Conventional assumptions about how urbanization proceeds may not apply. An empirical study on a large scale like this allows us to test our assumptions against evidence.

We are certainly not denying the remarkable pace of spatial expansion of cities in East Asia. This is visible not only to satellites but to anyone who visits the outskirts of an East Asian city and sees vast constructions sites where fields used to be last year. What is less immediately visible is the even faster pace of people moving into cities from rural areas, drawn by the prospect of a better life. Perhaps we should not be surprised that cities have been unable to grow fast enough to keep pace with this massive population growth, given the difficulties that they typically face in financing and building infrastructure and acquiring new land for urban growth. This is particularly true in lower-middle income countries, where urban population growth was fastest.

Those who live in East Asia’s congested cities may think that more density is the last thing they need. But in fact higher density can actually reduce congestion. In denser places, more goods and services are available nearby, which means there have to be fewer, shorter car trips, leading to fewer cars on the road at any given time. Population density also translates to economic density, which promotes what economists refer to as agglomeration effects. In a time when cities in many other parts of the world are struggling to increase urban densities, the high density of East Asian cities can be an environmental and economic asset.

Does this mean that urban leaders and policymakers in dense East Asian cities need not worry about density at all? No - it means that rather than simply focusing on the need to increase densities, as planners in other parts of the world struggle to do, they need to enable the density that does exist to be well coordinated, located and designed. High-rise apartment ‘superblocks’ and informal settlements alike often have high density, but needless to say density alone does not make these places ideal urban neighborhoods. Density should be coordinated with transport, jobs, schools, public spaces and services. Mixed-use neighborhoods with frequent intersections help make dense cities more walkable and bikeable.

Are you surprised to see that urban population densities in East Asia are increasing? Is there something you think we have not considered? Explore the report and the data and let us know what you think.