The last few weeks have been a stark reminder of how natural disasters can undermine precious development progress in an instant.  Images of incredible devastation in the Caribbean wrought by a record-breaking Atlantic hurricane season, collapsing buildings in Mexico during a violent series of earthquakes, and massive monsoon flooding in South Asia that claimed hundreds of lives have resulted in an outpouring of support from the international community.

Unfortunately, scenes like these are becoming more routine. The impacts of climate change are becoming increasingly visible , and rapid urbanization is concentrating risk in vulnerable regions of the world.

This is an admittedly bleak picture. But another important statistic is relevant here – over the next 20 years, humans will build more infrastructure than what has been built over the last 2,000 years. The “Investing in Urban Resilience” report, for example, estimates that global infrastructure needs at more than $5 trillion per year.  As the built environment provides the first line of defense against natural hazards, we are living through a rare opportunity to lock in either resilience or risk in many fast-growing parts of the globe.

Much is being done by country governments and development partners in this regard. At the World Bank, investment in urban resilience has averaged $2 billion annually over the last five years, creating a portfolio of more than 70 projects in over 35 countries. Our Global Program for Safer Schools, partnering with a range of academic, civil society, and development actors, is working to ensure safer learning environments and minimized disruption to educational services for millions of students. We are also working closely with the Government of Japan on scaling up investments in other high-quality, disaster-resilient infrastructure, and are exploring the co-benefits of investing in ‘green infrastructure’ projects like mangrove forests, urban parks, and other nature-based solutions for climate and disaster risk.

The infrastructure needs of the coming decades dwarf the efforts of any one institution.  To bring resilient infrastructure investments to scale, a sustained and coordinated effort on behalf of major development partners, country governments, and the private sector will be crucial. To better explore this important topic, the Global Facility for Disaster Reduction and Recovery (GFDRR), the World Bank, the Government of Japan, the European Union, and USAID are hosting a special instance of the Resilience Dialogue series on International Day for Disaster Reduction (Friday, October 13th) alongside the 2017 World Bank/IMF Annual Meetings, featuring a keynote by Richard Branson, Founder of the Virgin Group.

Smart engineering, careful land-use planning, and strategic investments in resilience can better protect lives and development gains from disasters – but these important steps won’t happen without strong leadership and international consensus. As a sobering last few weeks in disaster risk have clearly shown, we can’t wait any longer to act. 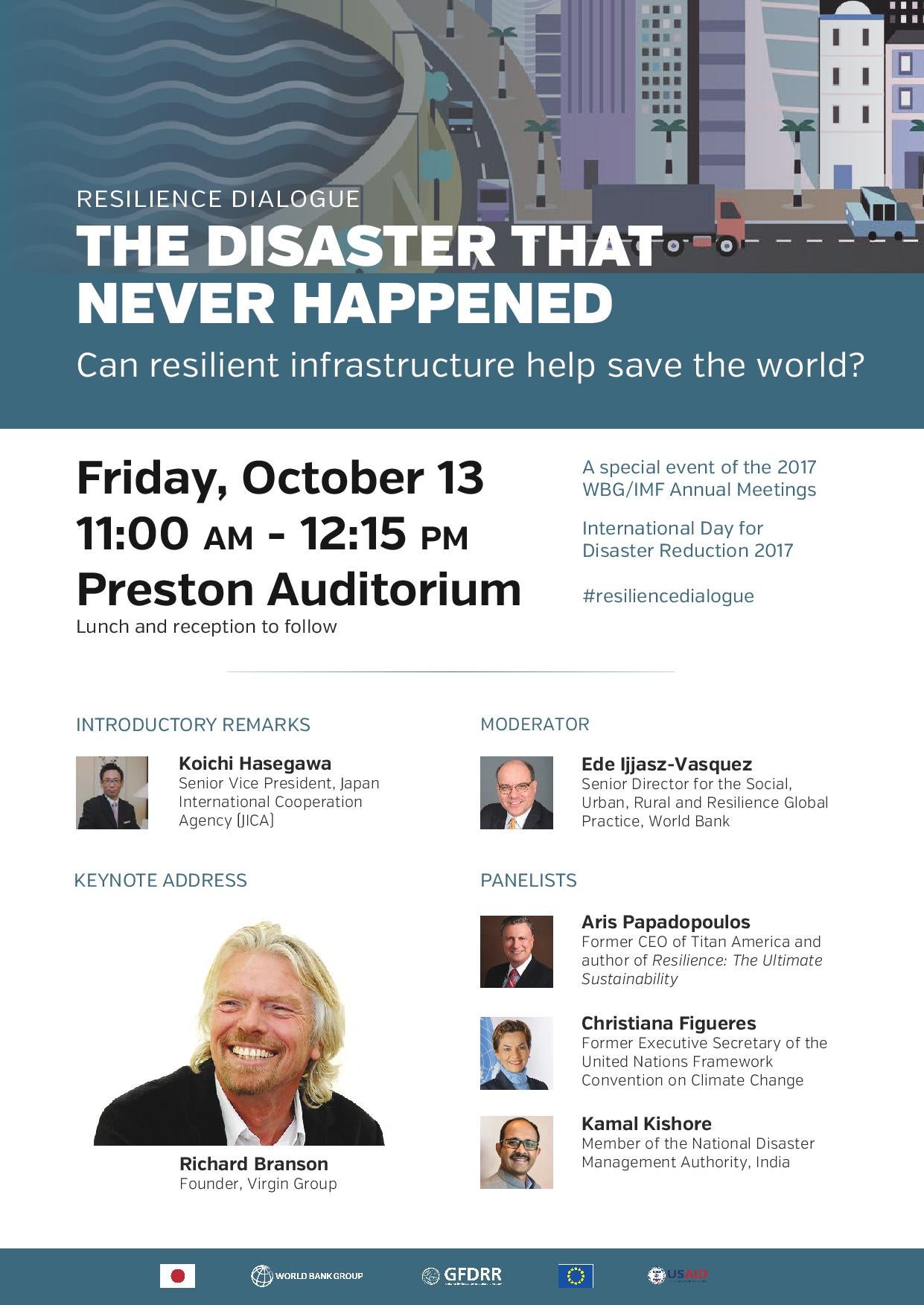 For those of us actually registered for the Fall meetings, I wioll assume we can just show up for the live event??

Dear Richard, if you have access to the World Bank Main Complex during the Annual Meetings, you should be able to attend in person. Please be advised to arrive at the venue early to secure a seat. Thank you.