What can satellite imagery tell us about secondary cities? (Part 2/2)

In the previous blog, we discussed how remote sensing techniques could be used to map and inform policymaking in secondary cities, with a practical application in 10 Central American cities. In this post, we dive deeper into the caveats and considerations when replicating these data and methods in their cities.

Can we rely only on satellite? How accurate are these results?

It is standard practice in classification studies (particularly academic ones) to assess accuracy from behind a computer. Analysts traditionally pick a random selection of points and visually inspect the classified output with the raw imagery. However, these maps are meant to be left in the hands of local governments, and not published in academic journals.

So, it’s important to learn how well the resulting maps reflect the reality on the ground.

Having used the algorithm to classify land cover in 10 secondary cities in Central America, we were determined to learn if the buildings identified by the algorithm were in fact ‘industrial’ or ‘residential’. So the team packed their bags for San Isidro, Costa Rica and Santa Ana, El Salvador.

Upon arrival, each city was divided up into 100x100 meter blocks. Focusing primarily on the built-up environment, roughly 50 of those blocks were picked for validation. The image below shows the city of San Isidro with a 2km buffer circling around its central business district. The black boxes represent the validation sites the team visited. 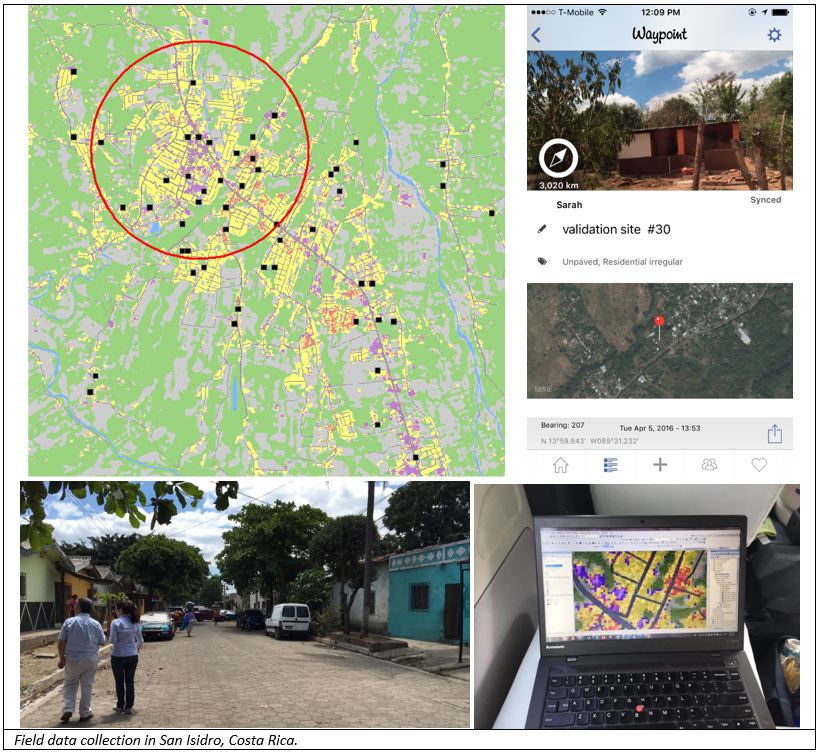 At each site, the team captured several photos and recorded whether the majority of the land was accurately reflected in the land cover map. Discussions with local government officials, taxi drivers, and policeman provided additional insight.

Acknowledgments. This work was possible thanks to the generous contribution of the United Kingdom’s Department for International Development (DFID) and the Swiss State Secretariat of Economic Affairs  through the Multi-Donor Trust Fund for Sustainable Urban Development. This work builds on the lessons learned from the Spatial Development of African Cities Project.