What does “urban” mean?

Anyone reading this blog is likely to have heard the statistic that ‘over half of the world’s population now lives in urban areas’. This has been the standard opening line of reports and presentations about urbanization since this milestone was supposedly reached in 2008. But what does it really mean?

In everyday usage, terms related to human settlements have vague, shifting meanings. What one person might describe as a small ‘city’ might be a ‘town’ or ‘village’ for someone else; one person’s ‘megacity’ might be a cluster of cities from a different perspective. Similarly, we can usually identify areas that are clearly within a city and others that are outside it, but there is usually a peri-urban area of intermediate density that usually lies between the two, making it hard to define a clear city limit. Formal administrative boundaries may have historic or political meaning, but are rarely aligned with the physical or economic extents of the urban area.
What exactly is a city? It depends who you ask

It turns out there is no standard international definition of an ‘urban’ area or ‘urban’ population. Each country has its own definition, and collects data accordingly. The statistic that 50% of the world’s population is urban is arrived at simply by adding up these incomparable, and sometimes conflicting, definitions.

A useful list compiled by the UN Population Division gathers the definitions of ‘urban’ population used in censuses in 232 countries. The criteria used by countries to decide whether to define a place as ‘urban’ include population size, population density, type of economic activity, physical characteristics, level of infrastructure, or a combination of these or other criteria. Some simply list their urban areas by name.

So how can we come up with an urban equivalent of the dollar-a-day benchmark? Let’s look at how some countries use specific thresholds for defining urban areas, and how these can be adapted globally.
Using population and density thresholds to define ‘urban’ areas

101 countries use minimum population thresholds as a means of identifying settlements as ‘urban’, either as the sole criteria or together with others. The most frequently used threshold values are 2,000 inhabitants (used by 23 countries), and 5,000 inhabitants (used by 21 countries), as shown in the figure below. The average of all these thresholds was just under 5,000 inhabitants. (It may strike you how low these figures are. The most frequently used minimum population, 2,000 people, could easily be accommodated within a single large office building.) 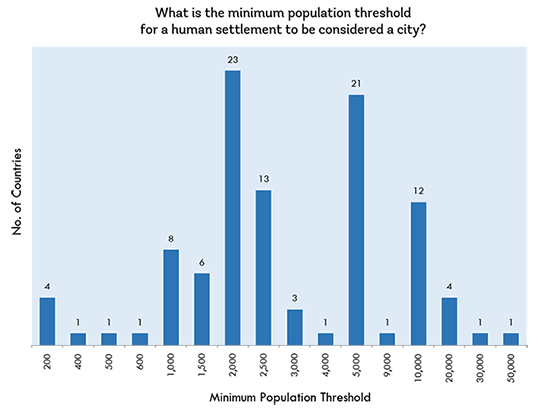 Only 9 countries use minimum population density thresholds, of which only one, Germany, uses it as a sole criterion for defining urban areas. The lowest density threshold used is 150 persons per sq. km. (Germany), and the highest is 1,500 (China and Seychelles).

The density thresholds also do not take into account the variation in the size of the areas over which the density is being averaged, which would result from varying sizes of administrative units. Even within the same country, two identical settlements may be treated differently, depending on whether they fall within large or small administrative units.
Past attempts to create a global ‘urban’ definition

Others have already recognized this issue, and attempted to craft a standard ‘urban’ definition:
Using satellites and modeling techniques to map cities

Reliable commuting data, necessary to implement either approach described above, do not exist at the global scale. However, global maps of built-up areas and populations of increasing resolution and sophistication are now available. The European Commission’s Joint Research Centre is developing a Global Human Settlements Layer (GHSL), while the German space agency DLR is developing a layer called Global Urban Footprint. Meanwhile, the WorldPop project uses these and many other layers to create high-resolution population distribution maps (see the recent blog on WorldPop by my colleague Tatiana Peralta Quiros).

In the World Bank’s global Urban and Social Development unit, we are starting to experiment with ways in which we can use these layers to create standard, comparable definitions of urban areas, building on the OECD’s ‘core’ and ‘hinterland’ approach mentioned above.

Our approach will use pixels of standard size as the units of analysis, rather than administrative boundaries, which vary in size. The thresholds that we will have to define include minimum core size, core density, hinterland density, total population, and the maximum distance between pixels for them to be considered part of the same whole. These thresholds will need to be modifiable to suit different needs. They may be used to define the ‘degree of urbanization’ of a place, rather than implying a strict urban/ non-urban distinction.

Needless to say, a city is more than its physical form. It is a historical and cultural artifact, a social and political network, and an economy. But arriving at some common understanding of urban areas, using physical and demographic criteria, can at least ensure that when we compare urban areas or trends in urbanization between countries, we are comparing like with like. With the potential introduction of an ‘urban’ Sustainable Development Goal, along with other indicators and standards for cities, it is becoming more important than ever to develop a common vocabulary on urbanization.
Topics
Health
Urban Development Urban cities should have measurement related to new jobs created, and re-skilling measurements. Re-skilling is important because with change in technology every segment of the work force needs to be re-skilled.

Enlightening! Even within India, the definitions of 'larger urban areas, 'smaller urban areas' and 'transitional urban areas' [phrases used in article 243Q in the Constitution] differ from one state to another.

I think the definition of urban should incorporate population density , size, Complexity of built environment and infrastructure

I think the word 'urbanization' should be conceived from from the historical point of view. It is difficult to be restricted within a given time, dimension, character or environmental change.

Most of the definitions given to the concept are more closely related with what may constitute an 'urban center' not 'urbanization' in this regard. For 'urbanization' is an ongoing process which continuously explain changes over time I.e. demographic (most pertinently as a result of migration), residential (which associated with settlement expansion), institutional (most importantly education), commercial/industrial, infrastructural (health, roads, rail lines, waterways, parks, open spaces etc), as well as the physical planning development stimulated by all these.

However, taking one approach out of the above couldn't stand the definition of 'urbanization' but an 'urban center'. For example, defining 'urbanization' with physical planning is different from its definition in relation to environmental disease and control. These are also different from defining the concept with structural economic changes and commercial manufacturing. All these definitions seem to elucide the character of an 'urban center' with its functional diversification.

'Urbanization' as a phenomenon should therefore be contextualized from the point of view of changes that continue to change the nature and character of a settlement over time. It should be historically defined rather than it being subjected to some instrumental definitions which could hardly maintain standard in other parts of the world.

How for example, could someone define an 'urban center' in the pre-colonial Africa for example, or the medieval Europe? Did this term even exist? But terms like 'city' did exist! But what type of city? We might have heard about the 'ancient cities' of Europe . But why "ancient"? Why are they now referred to as just "cities"? In Africa, we might have heard about the 'ancient city of Meroe. But most often such city-like states were termed as either states, kingdoms or empires? My question is: what character(s) could someone figure out to define such as 'urban centers'?

It is likely however, that one will continue to wrestle with the concept if his definition failed to have historical insight on how societies (or settlements) evolved, grew and developed over ages.

This definition is quite good

this is a good article