Bhutan: Connectivity in the Cloud(s) 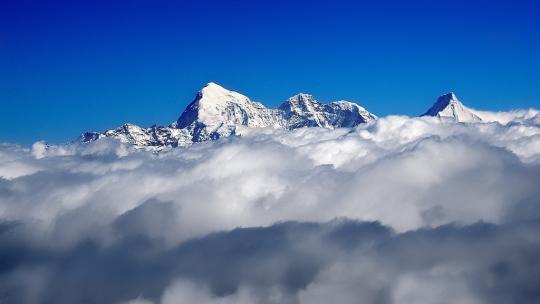 Bhutan has some of the most thrilling rides in the world—in the air and on the ground.

Flying into Paro Airport, the only international airport in Bhutan, is an experience like none other—its narrow runway tucked between rugged 18,000-foot peaks, high in the Himalayas. Below, the road between Thimphu, the capital, and the border city of Phuentsholing twists and turns as it navigates some of the world’s highest mountain passes, often blanketed in fog with visibility reduced to mere meters. On clear days, both offer some of the most stunning, breathtaking views you will ever see.

But stunning peaks do not make for easy trade routes, and this is a problem in Bhutan. That’s why the World Bank’s International Trade Unit teamed up with the South Asia Transport Unit to conduct a diagnostic of impediments to transport and trade facilitation in Bhutan.  The diagnostic, a prelude to a potential investment operation, was based on the recently released Trade and Transport Corridor Management Toolkit.

Bhutan is one of three landlocked countries in the South Asia region, Afghanistan and Nepal being the other two. Access to the outside world for trade in goods is by road or by air. Road transport is by far the most dominant, carrying more than 90 percent of goods by volume and value.

Yet, in the 2010 Investment Climate Survey of Bhutan, underdevelopment of road transport was cited as a major infrastructure problem. Forty per cent of all surveyed firms (70 percent of the large firms) experienced losses arising from the difficulties of land transport. The latest World Bank Logistics Performance Index ranks Bhutan 143 out of 160 countries in overall logistics performance and 140 in terms of infrastructure.

Many of the reasons why Bhutan ranks so low in trade logistics are related to constraints imposed by its unique demography, topography, and climate.

The country has a dispersed and low-density population scattered in small and remote settlements that, together with the topography, greatly increase the cost of transport. Demand is thinly spread over difficult terrain.

Road transport distances tend to be double the straight line distance between any two points. Most roads are narrow, with numerous sharp curves and steep gradients, limiting speeds to 20-40 km per hour.  To make matters even more challenging, the geology and climate also increase the likelihood of landslides that often block key access routes.

But it is also this geology that makes Bhutan such a beautiful place. Infrastructure improvements have to take care to protect the pristine but fragile natural environment, and this can add even more to the cost of providing logistics infrastructure and services.

As a result, infrastructure in Bhutan is lacking in certain regions. The northern half of the country is generally well connected by a highway running from east to west. This core highway is linked to the rest of the country by north-south links at various points.

The most important north-south link is the road between Phuentsholing, the country’s busiest border post, and Thimphu. Yet for one 44-km stretch, it is only a single lane. This is a major constraint to the movement of large trucks. A 24-km bypass is currently under construction, and its completion should almost halve the travel time between the two cities.

The southern part of the country is a different story.

The south lacks a continuous highway providing east-west connectivity. Constructing one is a top priority of the government, as the region has great potential to contribute to exports. The availability of flat land, reliable electricity supply, and proximity to the large Indian market give the south significant comparative advantages. The government’s plans to capitalize on these conditions hinge on the construction of a southern east-west highway (SEWH) and the establishment of four industrial parks along the border.

Without the SEWH, some traffic has to pass through Indian territory to move from one part of Bhutan to another. Complying with both countries’ transit entry and exit procedures pushes up border clearance costs, in time and money.

Then there are the delays. Bhutanese traffic often gets caught in traffic waiting to clear state procedures between Assam and West Bengal in India, and occasional demonstrations and road blockages on the Indian routes make transit times further unreliable.

The World Bank’s new Trade and Transport Corridor Management Toolkit is designed to diagnose problems like these and identify solutions.

Putting the toolkit to use in Bhutan, five specific opportunities to reduce trade costs and improve logistics performance were identified.

First, develop an alternative route between Phuentsholing and Thimphu. Currently, there is only one reliable link between the main border post and the capital, and the reliability of that stretch of road is shaky due to the possibility of blockages due to landslides and fog. The development of an alternative route is critical.

Second, complete the SEWH. Sections of what could become the SEWH are already in place, but they need improvement. New sections will also need to be constructed. Without a decent SEWH, the integration of the southern part of the country will continue to lag, opportunities for complementarities between proposed industrial estates will remain limited, and Bhutanese enterprises will continue to bear the added costs of transit through Indian territory.

Third, build a dry port near Phuentsholing. This is where goods from larger Indian trucks are unloaded and reloaded onto smaller Bhutanese trucks. A dry port would greatly improve the logistics system by helping provide customs authorities with proper facilities, eliminate the current multiplication of clearance sites, and decongest the city by diverting part of the traffic to its east.

Fourth, connect Phuentsholing to the Indian railway network. Dry ports work even better when they are connected by rail to major sea ports or other trade gateways. And Phuentsholing actually was connected to the Indian network in the past, but the link fell into misuse and was eventually abandoned altogether. Recent feasibility studies and agreements between the two governments are already seeking to restore railway connectivity between Phuentsholing and Hasimara, just a few miles over the border, in India.

Fifth, improve IT connectivity. As road infrastructure is developed, opportunities can be exploited to share transport and ICT infrastructure to improve connectivity to the outside world, and to the cloud. Such connectivity, adds to the backbone for IT services while also helping to facilitate the automation of border management. Bhutan is introducing a new customs IT system, which, with appropriate infrastructure, can facilitate the development of the industrial parks along the border.

These potential solutions are just a brief snapshot but still need to the substantiated through much more comprehensive analysis. The next step is to study the above elements in detail to ensure that their design is suited to prevailing conditions both in Bhutan and in India.