Helping Firms Diversify, One Incentive at a Time: the Experience of Nepal

Nepalese policymakers are no exception. Largely due to being a landlocked country wedged between China (and the Great Himalaya range) and India and its low level of GDP per capita, Nepal’s exports are highly concentrated in a handful of products which are sold to very few countries. To be precise, 85% of total exports in 2011 were sold to only 5 countries, with 80% of these sold in India alone. Additionally, over the last decade, import growth dramatically surpassed that of exports, leading to a mounting trade deficit.

To reduce this exposure, promote local content, and increase exports, the government of Nepal introduced in 2010 the Cash Incentive Scheme for Exports (CISE). The program provides cash subsidies ranging from 2 percent to 4 percent of the value of export transactions for a select group of products, subject to two conditions: (i) that the domestic value-added incorporated in the export shipment exceeds a minimum threshold, and (ii) that the exported product is sold in a country other than India.

Interventions that support firms’ internationalization, and specifically, their diversification efforts are common practice around the world. However, there is not a silver bullet and not all interventions work, so, evaluating their impact is crucial since public funds are scarce and needs unlimited. If a program is deemed successful, the intervention could be scaled-up. Otherwise , resources could be redirected to alternative, more efficient uses. 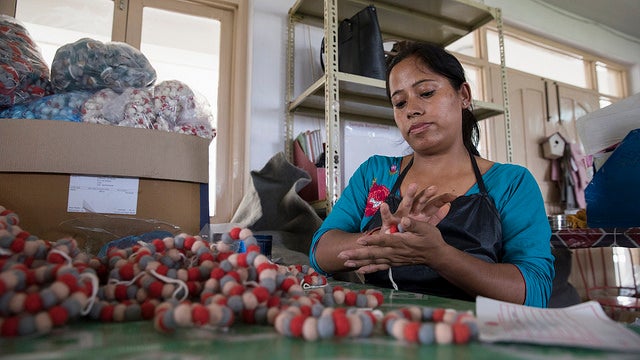 A woman does quality control on handicrafts at Everest Fashion air Craft in Lalitpur, Nepal.

In an effort to ground policy decisions on evidence, the Government of Nepal partnered with the World Bank Group to evaluate whether this export subsidy had had the desired impact. A recently released World Bank Working Paper sheds light on the matter, offering some lessons both for Nepal and for other countries that may be considering similar interventions. The research, supported by the competitiveness policy evaluation lab in the Trade and Competitiveness Global Practice, was a central input for the recent policy report entitled “From evidence to policy: Supporting Nepal’s trade integration strategy”.

The key finding is that the cash incentive to exporters has not helped exports growth outside India. We find no significant effect of the export subsidy on firms’ export values, quantities, prices or their growth rates regardless of whether a product was eligible to receive subsidies or not, or if the market served was India or elsewhere. All in all, it appears as if the product and destination requirements imposed by the CISE scheme were, to a large extent, not binding. The firms receiving subsidies did not have to radically change their product mix or destination markets they sold to; conversely, firms that were producing non-eligible goods or that sold mostly in India probably did not find the incentives generous enough to alter their export behavior.

The key implications of these results are two-fold:


First, the design and implementation matters. The intervention has not been reaching the firms it meant to support. High fixed costs of filing, due to a lengthy and complex filing procedure, coupled with limited resources and a first-come first-serve allocation mechanism have been impediments for exporters (and particularly for small and new exporters) to claim the incentive. In 2012, only 3.3% of eligible firms actually received the incentive. This increased to above 6% in 2013 and 14% in 2014, as more funds were made available, but it remained low: most firms exporting eligible products do not receive any incentive. And those that are receiving it tend to be substantially larger, and also tend to find it easier to receive it more than once. In fact, the conditional probability of receiving the incentive given that the firm had managed to receive it the year before was in the range of 50-70% (compared to the unconditional probability of 3-14%).

Second, flexibility in design, following public-private dialogue is crucial. The high costs of filing for the incentive induced firms to ask for the simplification of the application processes. The Government of Nepal actually agreed to introduce some changes, among which a ‘fast-track’ system was included, that reduced the burden faced by firms to prove compliance with the domestic value added thresholds. These changes reflect a healthy public-private channel of communication. However, many of these changes have not yet been fully implemented.  Both field-level interviews, and systematic data analysis suggest that the ‘alleged’ change has not fully implemented, or at least did not result in a reduction in the fixed costs of filing (in fact these have increased over time).  The change involving the reduction in incentives’ rates, however, did materialize, with median effective incentive rates having fallen from 2.9% to 2.1%.

How to take it from here? Altogether, results suggest that the cash incentive would benefit from being revised. In the process of the revision it is important to carefully consider the specific market failure the intervention intends to solve, streamline the process, and considering a targeting mechanism. If, for instance, the incentive aims at helping firms financing the informational costs at the beginning of the process (the so called ‘discovery costs’) it is important that the incentive targets new firms, or new export flows, rather than existing, well-established ones. The filing process also needs to be streamlined so that the fixed costs a firm face when filing for the incentive fall substantially, and smaller firms are better positioned to obtain it. This will also reduce the cost of administering the scheme for the government. More generally, resources that are currently committed to this export incentive scheme could be put to a better use to finance policy interventions that would likely have a wider impact on export competitiveness. A reform to the tariff code that penalizes exporters that rely on imported intermediates or the streamlining of the duty-drawback system for exporters are good examples.
Topics
Competitiveness
Trade
Countries
Nepal
Regions
South Asia