Hurry up! How the Belt and Road Initiative changes trade times and trade


When it comes to trade, speed is of the essence. This is especially true for developing countries integrating with global markets. When goods and inputs are time sensitive, delays can be particularly costly. For this reason, the time it takes to get goods from one place to another – trading times – is a key variable determining how successful a country will be in global markets.

How will the Belt and Road Initiative impact the time it takes to trade? In our recent work, we created a new database on transport projects linked to the BRI and used it to analyze the effects on trade. This research combines econometric estimations on the impact of trading times on exports and geographical information systems (GIS) analysis to compute the bilateral trade time between countries in the Belt and Road countries before and after the proposed interventions.

1. The BRI transportation infrastructure will boost intra-regional trade. The impact varies across countries.
Aggregate results suggest that BRI infrastructure improvements could increase total trade among BRI economies by 4.1 percent.[1] Countries such as Uzbekistan, the Islamic Republic of Iran, Oman and Maldives benefit the most after improvements in trading times, with an increase in their exports above 9 percent. Other countries, such as China, Saudi Arabia and Thailand will benefit the most in terms of value of their exports given their already high trade within the BRI.

2. Improved trading times can increase trade in time-sensitive sectors.
Trading times are particularly important for time sensitive products and for products that rely on time sensitive inputs in production processes. Reducing trade times will therefore increase specialization in sectors such as livestock, vegetables, fruits, nuts and crops, which will benefit the most from improving the ability to transport the final products on time to the consumers or end users (direct effect). Specialization in exports from meat products, chemicals, ferrous metals, rubber and plastics will also increase given the improvement in the ability to access the intermediate inputs on time (indirect effect). As a result, countries that are more integrated in regional and global value chains tend to benefit more from reductions in trade times due to BRI projects. 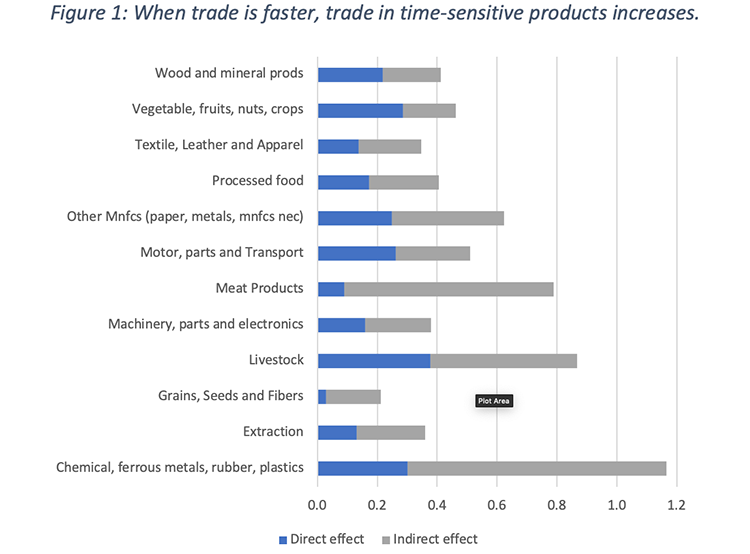 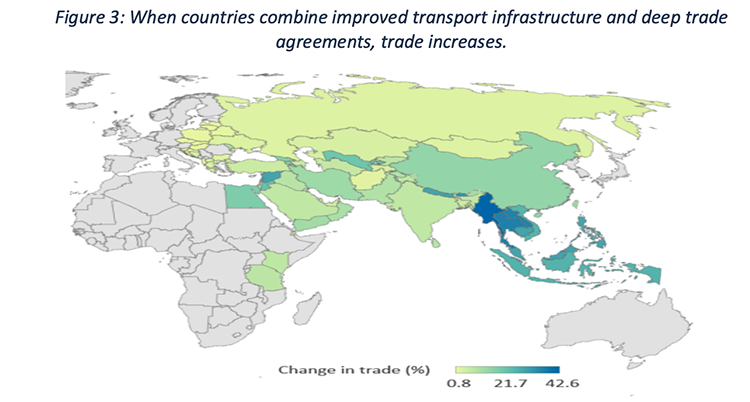