Trade Linkages Among Belt and Road Economies: Three Facts and One Prediction

A key objective of the Belt and Road Initiative (BRI) is to promote international trade among participating economies. As a first step to understanding how the BRI will transform trade flows, we need to look at the existing commercial relationships. A recent paper by the WBG studies the evolution of trade and production linkages of the economies along the Belt and Road. Here is what we know so far.

Fact 1: BRI economies account for an increasing share of world gross exports, in particular intermediate exports, but there are important regional disparities.

In 2015, economies along the Belt and Road accounted for 37% of world exports, up from 21% in 1995. The increase was in part driven by the strong performance in intermediate goods exports for which BRI economies account for 42% worldwide. However, there are strong regional disparities. Using the World Bank regional classification, we find that Europe and Central Asia and East-Asia and Pacific accounted in 2015 for about 80% of total exports from BRI economies. While growing over the past two decades, economies in the Middle East & North Africa and South Asia regions still represent a small share of world trade. 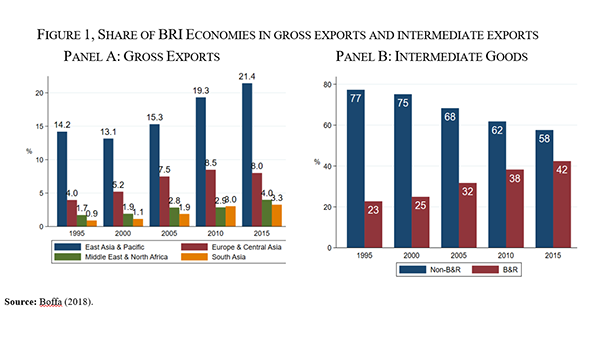 In recent years, production has unbundled and is no longer tied to one specific geographical location. Against this backdrop, intra-regional trade has been on the rise among BRI economies, mostly because of high demand and supply for intermediate goods in East Asia and Pacific economies. This evidence suggests an increasing integration into global value chains (GVCs). The data show that the production network of value-added has deepened and centers on two economic poles: China and Russia, with China progressively at the center of the network. 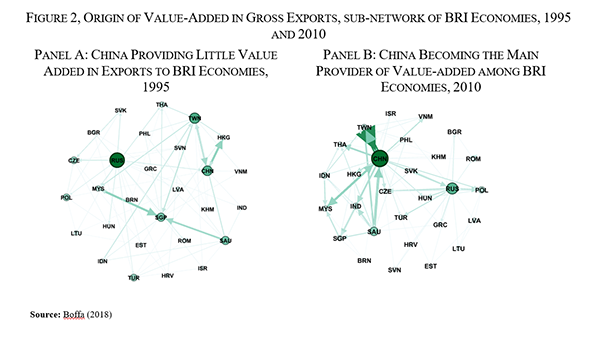 Fact 3: Large export sectors for BRI economies, such as electronics, are largely dependent on value added from non-BRI countries.

The sectoral composition of exports varies widely across BRI economies. In aggregate, the main engine of exports has been the electronics sector. One might wonder if, like in the well-known iPhone example, most value added is sourced from advanced economies outside the BRI. Data show that on the whole, the electronics sector in BRI economies uses 50% of domestic value added and 50% of foreign value added. This means that out of $1 of electronics exports, 50 cents of revenue accrues to the domestic economy. Roughly 2/3 of the foreign value added comes from outside the BRI, stressing the importance of existing GVC relationships with non-BRI economies.


Prediction: Global value chain linkages will play a key role in determining the effect of the Belt and Road Initiative on trade flows.

The BRI could reduce trade costs, particularly for its most peripheral economies, through new infrastructure projects, lower trade impediments, and reform of domestic policies. If successful in integrating more countries in GVCs, the BRI could have large effects on trade flows, particularly intra-regional trade. Because intermediate goods cross borders multiple times within global value chains, the effect of trade cost reductions on trade will be amplified, leading to sizeable efficiency gains. Indeed, there is preliminary evidence that a potential decrease in trade costs between BRI economies will lead to a more than proportional increase of trade in value added. Ongoing research at the WBG will further investigate this insight.