Mr. Julio Lopes, Secretary of Transport of the State of Rio de Janeiro, recently visited the World Bank to present what the city is doing to improve the quality of public transport. It is a fascinating example of how cities can improve urban transport, with a clear target of benefiting the poor and reducing a city’s carbon footprint.

Brazil’s recent economic growth, the hosting of the football World Cup in 2014 and the 2016 Olympic Games are serving as a catalyst for the Rio de Janeiro metropolitan area to reform public transport. Rio, like many other Brazilian cities – where close to 85 percent of the country’s population lives – is facing strong pressure to find new ways to adapt its transport system to increasing population and rapid motorization. The city has a population of about 6 million and motorized transport accounts for almost 70 percent of trips and about 45 percent of the city’s total emissions.

Both the State and the Municipality are seeking to decongest the metropolitan area cooperatively through better integration of the existing transport systems.  The aim is to offer an acceptable level of service to the user while reducing operating subsidies and informality in the bus system. The result will be a more integrated multimodal network, including bus/BRT (under the authority of the Municipality), suburban railways (State), and metro (State). There are also plans to upgrade waterway terminals and acquire new ferries. All public transport systems in the City of Rio will need to be fully accessible for people with disabilities by 2016, to be compliant with Federal Laws on accessibility. 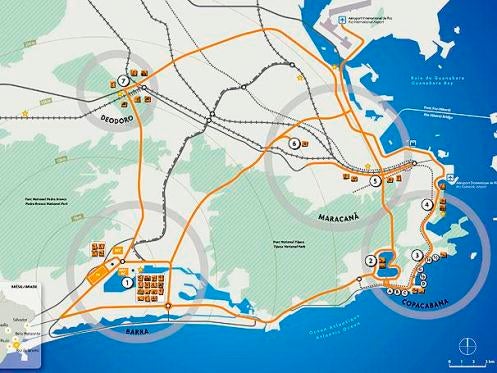 In particular, the State’s emphasis on improving the rail-based networks, particularly the SuperVia commuter rail and MetrôRio systems, is a cost-efficient priority which will contribute to a cleaner environment and to the greening initiatives put forward by the State. It will also help facilitate access to employment centers, health, education, and leisure facilities by poorer segments of the population. On a daily basis, 46 percent of the poor residents of Rio’s peripheral areas travel to the capital. It is estimated that 74 percent of SuperVia users are poor and six of the nine municipalities served by the network have poverty rates above 50 percent.

One of Rio‘s major achievements is the recent introduction of the Integrated Transit Fare or Bilhete Único Integrado (BUI). Launched in 2010, the BUI is an electronic card system that allows residents of the 20 municipalities in Rio’s metropolitan region to transfer between various modes of public transport (ferries, commuter rail, metro, buses and informal transport - usually in the form of privately owned and operated vans) within a period of two and a half hours for the price of a single fare ticket. This integration of public transport fares at the state and municipal levels has improved the affordability of public transport for poor households and led to a more optimal use of the road network in the city 99 percent of riders in Rio’s metropolitan region are now able to reach their destinations using the single-fare pass; while bringing reductions in their travel time and when transferring between different modes of transport, making public transit more attractive compared to cars and motorcycles.

The BUI has contributed to a more balanced job distribution throughout the region: under the old system, employers - who are required by law to cover a fixed percentage of their employees' travel expenses, had a tendency to select applicants who lived close to their job and therefore enjoyed comparatively low commuting costs; with the new integrated fare system, workers who live farther away from major employment centers now benefit from lower transport costs and have consequently become more attractive to potential employers. As a result, employers no longer select their employees based on where they live. 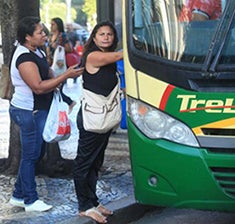 The BUI card, which costs up to R$4.40 (about US$2.00), led to a reduction in the number of bus fares from 74 to 12 in the Metropolitan Area. The Department of Transport estimated that between February 2010 and February 2012, the card helped generate more than 585.3 million trips, benefiting an average of 280,000 users per day. An independent study estimated that the card implementation would represent an average saving of R$2.62 per user; a reduction of over 50% in the number of public transit trips taken; and an increase in formal jobs from 71.0% to 72.15%.

A critical factor in ensuring the success of the card was tackling the issue of informal buses. Introducing the BUI required the passing of new legislation regulating the services of bus operators and their consolidation from 47 companies to four. These companies were required to compete for five areas of the city through open tenders. One of the requirements for the new operators was adherence to the new ticketing system. The introduction of the BUI and the lower public transport fares that ensued translated into a 20% decrease in fare revenues; since Rio does not award subsidies to public transport operators, the implementation of the new fare system forced bus companies to become more efficient and to consolidate some of their operations.

There are other reforms underway in Rio related to bicycles and expansion of BRT lines and funicular transport in the city’s favelas that are interesting to review as examples of transport policies that can impact social inclusion and the environment. And if I had nearly half as much enthusiasm as Mr. Lopes about discussing good practice about Rio, this blog entry could easily become the length of a paper. For now, the World Bank is continuing its strong partnership with Rio in the context of a project that aims to upgrade Rio’s urban rail system. The project will further improve transit quality, favor the poor in particular, promote non-motorized transport, and improve the policy framework for sustainable transport. The project will also improve the transit system’s resilience to natural disasters and it will have positive impacts on mitigation and adaptation to climate change.