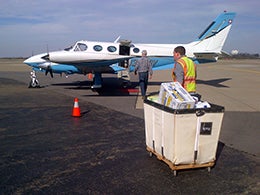 When a disaster strikes, such as a hurricane or a major earthquake, relief efforts are often hampered by destroyed or damaged ground infrastructure, mostly roads, bridges, and railway networks. In the days following such a disaster, relief efforts hinge on air transport capacity, which only depends on a clear runway or landing sites for helicopters. First responders, who focus on saving lives, are primarily aviation units of the armed forces or law enforcement. However, in the following days when relief efforts aim at reaching the suffering population at large, these aviation services are often not sufficient.

General Aviation (GA), which is primarily composed of corporate or private aircraft, increasingly plays a significant role in disaster relief. The owners of such aircraft get organized and donate their aircraft by flying relief missions, which can include the evacuation of people who lost their homes or transporting relief goods.

In the aftermath of the devastation caused by hurricane Sandy, which destroyed or severely damaged thousands of homes and left an estimated 100,000 persons displaced along the Long Island and New Jersey coastline, several NGOs organized the collection, transportation, and distribution of donated relief goods. For one such NGO, Angel Flight East, I flew a relief mission ten days after Sandy struck. Together with Dr. Brian Turrisi, we transported urgently needed goods such as jackets, blankets, medical equipment, diapers, and batteries. The goods were donated from all over the US and collected centrally at Allegheny airport in Pennsylvania, to be flown by GA aircraft into John F. Kennedy International Airport (JFK) on Long Island. There goods were distributed within hours by a local grassroots NGO, "Occupy Sandy". The authorities supported these efforts by granting priority for landing at JFK, and waiving all fees and taxes. 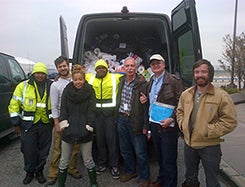 GA serving as a crucial air transport element following disasters is not limited to the developed world. During the aftermath of the devastating earthquake in Haiti in 2010, numerous GA aircraft flew supplies from the US into Port-au-Prince and Cap Haïtien airport. Local GA aircraft in emerging countries can also play a vital role.  For example in Guatemala, the Aeroclub de Guatemala has mobilized many GA pilots who flew relief missions to affected areas following the destruction by hurricane Mitch in 1998; after hurricane Stan in 2005, when GA aircraft distributed 1.2 million weekly family food rations in remote areas; and in the aftermath of the strong earthquake on November 7 this year.

The successful mobilization of GA aircraft following a disaster certainly depends on the generosity and motivation of their owners to donate their services. However, this has to be met by dynamic and open-minded authorities, who promptly remove any red tape to facilitate the deployment of these resources.

Many of the World Bank’s air transport projects aim at improving air traffic surveillance infrastructure, enhancing regulatory oversight, and developing sector policies that are conducive to the sustainable development of air transport services in client countries. These efforts are not only aimed at air carriers, but also include GA.