How should a city administration respond to the shared cab phenomenon? 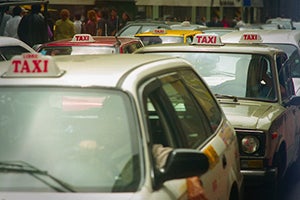 Smartphone apps are bringing massive changes to the taxi industry in ways that urban transport has not seen in a long while. From the US to China and Latin America (Bogota, Mexico), taxi alternative services have attained an impressive level of penetration in a short amount of time, often with great controversy. Indeed, many cities across the world are struggling with what to make of these services and how to regulate them.

While we have not been significantly involved with such services thus far, a recently appointed mobility secretary in a big Latin American city has asked us for support on developing an approach to the shared taxi industry, as part of a "Smart Mobility" strategy for the city. In that context, we wanted to start a conversation on optimal strategies for cities to be able to welcome and foster such innovations, while still capitalizing on the opportunity to create value for its citizens.


What is the city government’s interest in the shared cab industry? How should it respond to the phenomenon?

Government has an interest in regulating three important dimensions of the “traditional” taxi industry:

As far as taxi-alternative services are concerned, we mentioned earlier that sharing-economy entrepreneurs appear to be doing a good job at screening drivers/cars for passenger security, and provide transparency on fares. Therefore, it  seems that the key remaining public interest has to do with congestion, i.e. ensuring that new taxis are paying the external costs of the congestion they are causing. Instead, in most settings, the public debate is being driven by the interests of the ‘traditional’ taxi industry - whose grievances are certainly legitimate since they have paid a medallion fee in exchange for an expectation of exclusivity. However, from a transport planner’s perspective this is really is an issue of one-time contracts that should not distract us from thinking about the long-term public interest.

Given the public interest in managing congestion, perhaps the most important public intervention with taxi-matching services such as Uber and MyCab would be to require service providers to share with government detailed real-time data on speeds and rides:

Work will need to be done to define efficient and socially acceptable fee schedules – without compromising the ability of taxi-matching services to price according to demand, which is paramount to their business model innovation. But in the long run, such fees could have the potential to generate revenue for the government to replace the revenue lost by medallion fees and, more importantly, provide the right incentives for transparent, competitive and sustainable innovation.