Minister’s Death in a Crash: A Wake up Call for India 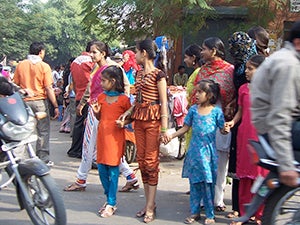 It is true for a country like India that thousands of deaths every year is just a statistic, but a single death can move the entire nation to take a serious look into an issue.

Merely eight days after being sworn in, the newly elected Indian Minister for Rural Development, Mr. Gopinath Munde, died in a tragic car crash. While the nation grieves at the passing of an immensely popular and celebrated leader, politicians and the public got a reality check on the seriousness of the road safety epidemic prevalent in the country today.

The irony of the event was that a day before the incident, both authors of this post met with the Joint Secretary and Executive Officers of the Ministry of Rural Development to discuss improvements to road safety under the existing World Bank-funded Rural Roads project. This news is a stark reminder for the government and the Bank alike that a lot remains to be accomplished if we are to achieve a sustainable reduction in road deaths in India.

The Minister’s death added to the alarming list of fatalities that make India’s roads among the most dangerous in the world. Official statistics say around 140,000 people in the country die of such preventable crashes every year and health reports suggest even more. Simply put, 10% of the world’s road deaths take place on India’s roads – which account for less than 3% of the world’s vehicles! In light of those figures, India urgently needs to take comprehensive action to make its roads safer.

The World Bank-led Global Road Safety Facility, committed to improving road safety in developing countries through capacity building, is taking a keen interest in this case and what will happen next. The unfortunate incident happened right in the heart of New Delhi – a city with developed road infrastructure, a relatively new vehicle fleet and access to the best trauma care facilities in the nation.

Then how did the multi-sectorial systemic approach for road safety fail in this case – and could this death have been avoided? In retrospect, the answer is likely yes. While the judgment on human behavior is still under investigation, there were certainly opportunities, with better vehicle safety measures and post-crash care, to alter the outcome of the event. Unfortunately, it was a side-crash with a direct impact to the rear passenger, who is most vulnerable of to car-to-car crashes. While wearing a seat belt does not help in a side crash, standard safety features like reinforcement bars in the door structure and side-impact airbags, if present, would certainly have reduced the severity of the injury.

Furthermore, according to media sources, the victim did not receive any on-site stabilization by paramedics and, by the time he reached the trauma hospital, it was already too late to treat the minister's internal bleeding-related injuries. Three other passengers involved in the crash sustained minor injuries only. A detailed central-level forensic investigation has been ordered, but it is clear that even a few missing links to the safe system approach can prove to be fatal.

In India, where institutional and legislative reform takes time and political willingness, strictly-enforced interventions backed by public awareness can have an initial positive impact.

The first is ensuring compulsory use of seat belts and helmets with visible enforcement presence and deterring penalties. Wearing a seat belt in a severe frontal crash can reduce the likelihood of death by half.

The second key intervention consists in improving design and engineering standards. Road signs, markings and crash barriers, for instance, should be treated as bare necessities rather than adornments. Ensuring provisions for vulnerable road users like sidewalks and wide road shoulders can significantly bring down the number of injuries.

The third is tightening the driver licensing system and ensuring vehicle compliance with safety standards.

Finally, improving the capacity and accessiblility of trauma care centers is crucial to ensure that victims can receive quality medical care within the first crucial hour.

Given the seriousness and multiple implications of road safety, the World Bank has significantly stepped up its engagement in road safety since 2009. In ten states in India, the Bank is providing the know-how for building road safety management systems, and financing safe road infrastructure.

The Minister’s death got the attention of the media, the political leadership and the senior bureaucrats of various departments including Health, Police and Transport.  We just hope that this much needed attention will be sustained in the long run and will translate into concrete policies and actions to prevent too many unnecessary road-related deaths.

India can and should make road safety a priority. That will be the best tribute to Minister Shri Gopinath Munde and the countless others who have needlessly suffered from neglect in road safety.
Topics
Education
Health
Governance
Transport
Countries
India
Regions
South Asia