Roads and the Environment: Lessons from the Yiba Expressway

My last project in China before transferring to Europe and Central Asia in 2008 was the Yichang-Badong (Yiba) expressway. This was a US$ 2.2 billion expressway through very challenging terrain, including the ‘Three Gorges National Park’.

It was massive—as evidenced by the following:

Faced with these challenges, including the longest tunnel of 7.5 km, the Hubei provincial government was concerned about the potential negative environmental impact of the project. These concerns were echoed by some at the Bank who I recall saying ‘why on earth would you want to put an expressway through a national park?’

The answer was quite simple. The expressway was going ahead with or without the World Bank’s involvement. The Hubei government wanted the Bank to assist them in making the project an example of how to construct an expressway through an environmentally sensitive area with minimal impacts. Management fully supported this and I was tasked with helping realize this vision, although unfortunately I was not involved with the implementation.

It is important to note that the ‘Hubei Provincial Transport Department’ (HPTD) was committed to the environment from day one. They implemented the project and it was their vision that we helped articulate and realize. Both parties also were committed to building on previous experiences and innovating to minimize any negative environmental and social impacts. 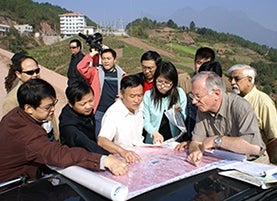 In early June 2014 I had the opportunity to return to Yiba to visit the project along with over 100 colleagues from various development institutions as part of the ‘Environmental Community of Practice’. Yiba formed the background and case study to a great week of training on roads and the environment.  In this post I highlight some of the environmental approaches on Yiba—many of which were unique and should form the basis for similar projects.

When building a new road, the key is to find the optimum alignment. During our ‘identification’ mission we travelled the entire length of the proposed alignment over several days, carefully reviewing the proposed locations of the expressway, interchanges, interconnecting roads, etc.

Some of the key considerations in selecting the final alignment were:

These principles are easier said than done, but the HPTD had an excellent design team who helped realize the vision. 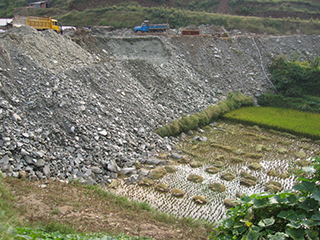 There was some 3.5 million m3 of waste from excavating tunnels and other project earthworks to be disposed of. If not done correctly, this could lead to major environmental damages. Contractors—who are interested in saving money—locate waste deposit sites in the most convenient place they can, and the waste sites are often lacking proper engineering such as toe walls and drainage.

For Yiba we wanted to avoid this and so the HPTD identified 63 locations as waste disposal sitesin consultation with local authorities. The bid documents included a proper preliminary design including toe walls, drainage, slope protection and access roads. The ‘Environmental Management Plan’ (EMP) then included a clear description of the waste sites and actions to be taken.

When you are building a new road, there is seldom access for contractors to the site. So they end up constructing ‘access roads’. This is typically done by sending out a digger and just cutting away as the contractor thinks best, along an alignment that they have chosen.

The government was very concerned about this as not only was the Yiba expressway going through a national park, but the challenging terrain and isolation were such that there would be more access roads than usual. The solution was similar to that for the waste sites: the bid documents clearly identified where contractors would be permitted to build roads, or use existing roads, for access to their sites. General design was given for new roads—including drainage—and each road had specific mitigation measures included in the EMP.

Contractors and the EMP

The EMP is a critical document which contractors need to follow to minimize the negative environmental impacts of their projects. If they do not follow it, you end up with problems—many of which can be permanent.

One of the problems that we encounter in projects around the world is that contractors sometimes decide that in the interest of finishing the project quickly, they will ignore the environmental damages and then try to fix them as much as possible when the construction is done. This seldom works.

The solution developed with the HPTD was simple:

Contractors told me that the arrangement was fair because they would be given a warning and the opportunity to fix it.

During my visit I was told that the HPTD went even further, instituting a reward system. Each month 0.4% of the payments were put into an environmental fund. If the contractor did well, they would get that back, and potentially up to a 0.6% bonus for exceptional work. They also instituted formal awards for contractors who did the best. These two motivators made a huge difference to ensure environmental compliance.

World Bank projects typically have a consultant who is responsible for managing the civil works, as well as the environmental and social compliance, on behalf of the client. This model is used on large projects. 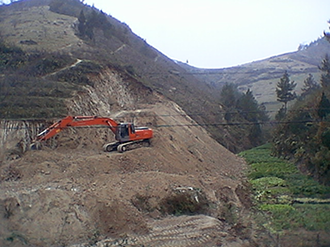 One of the challenges that we face is that these firms—usually staffed by civil engineers—too often miss environmental and social issues.  For the Yiba project we adopted a different model. A separate contract was given to only undertake environmental supervision. There were three ‘regular’ supervision engineers for the civil works and electrical/mechanical investments, and then one for the environment.

The only way that we at the Bank can fully meet our environmental and social safeguard policies is by engaging the public as much as possible. We do this during project preparation by undertaking extensive public consultations, but the focus is often on ensuring that people receive their due compensation for land, trees, or other resettlement related activities.

For the Yiba project, we also had an SMS based system that enabled people to advise the HPDT of issues related to the environment (or social).

It was wonderful to go back and see what an amazing job the HPTD did on the project, as well as the way they (and the Bank team) built upon our ideas and also improved on them. The movie below will give you an overview of the incredible engineering achievement that is the Yiba project today.

It’s a real honor to have been involved with this project—it is the highlight of my career as a Civil Engineer. I was humbled when the HPDT gave the Bank team an award for our contributions to the Yiba project.
Video
Topics
Environment
Transport
Countries
China
Regions
East Asia and Pacific