Transforming Transportation: Toward Sustainable Mobility for All 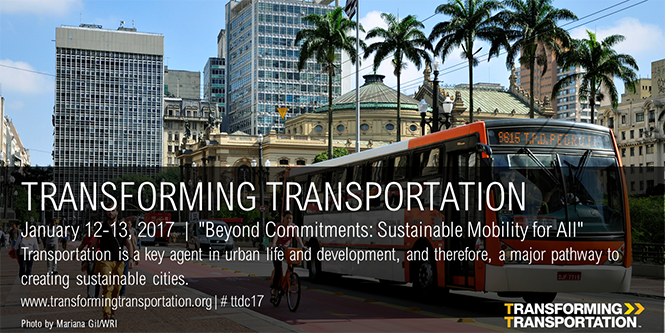 To learn more about the future of sustainable mobility, don't miss Transforming Transportation 2017 on January 12-13. Click here to watch the event live and submit your questions to our experts.

From taxi apps to car sharing, from buses to the metro, from bike sharing to walking, not to mention personal cars, there are more transportation choices than ever before for that staple of modern life: the daily commute. The same goes for the transport of goods, which can get from A to B by road, air, rail, waterways and soon drones. There are currently more than 12,600 km (nearly 8000 miles) of metro or urban rail and 5,400 km (3,300 miles) of bus rapid transit (BRT), collectively providing 154 million trips a day in 250 cities. Increased access to transport and enhanced connectivity decreases travel time and generates higher rates of direct employment, keys to elevating overall economic opportunity.

That’s the good news. The bad news is that the increase in mobility options comes at a high price. The challenges associated with growing traffic, especially in cities, are significant and threaten to become insurmountable. And despite the wide range of ways to get around, there have never been so many people who lack access to transportation or the means to use transportation.

Personal cars were a 20th century symbol of prosperity, but in the 21st century, they contribute to three pernicious trends: In 2015 and 2016, the international community has made a series of global commitments, which provide a clear vision of what sustainable transport looks like: the Sustainable Development Goals (SDG), the Paris Agreement on Climate Change, the New Urban Agenda at Habitat III, the Brasilia Declaration on road safety, and the Ashgabat Declaration. These commitments frame the space within which governments, the private sector and civil society will have to act on transport for the next 15 years.
​
Sustainable transport, as envisioned in those commitments, is defined by the following: To transform this vision into a reality, all actors in the international transport community must come together. 2017 is a year of opportunities to shape the implementation of the global agenda. The policy vehicles of each agreement, like NDCs and SDGs, are more effective when implemented with an integrated vision, creating a strong, cohesive, and resilient future.

To make best use of these opportunities, we need to act now. Articulating and implementing that vision requires leadership from governments, cities, the private sector, civil society and international organizations that will together galvanize action. This involves reaching a consensus among all actors around a set of common and ambitious goals, a global tracking framework to monitor progress, and a global program of actions. The solution is not to reinvent the wheel, but to create an umbrella initiative that can bring together existing programs and partnerships and that also can fill the gaps, where no program exists, for example on the key issue of accessibility.

We are excited to convene global leaders and experts this week at Transforming Transportation in Washington, discussing avenues to align transportation with the global agendas for climate and urban development. Co-hosted by the World Bank and WRI Ross Center for Sustainable Cities, the central theme is Sustainable Mobility for All.

The goal is to channel governments, the private sector and individual transport choices in the right direction. It is not about optimizing one form of transportation over another, but rather it is about increasing the opportunity for all to live in a more prosperous, healthy, and safe environment.
Topics
Climate Change
Energy
Environment
Education
Health
Series
Sustainable Communities