The first step in any transit planning process involves understanding the current supply and demand of transit services. In most of the countries where we work, understanding the supply of services is a messy, costly and lengthy process, since most cities have little knowledge of bus routes, services and operational schemes. 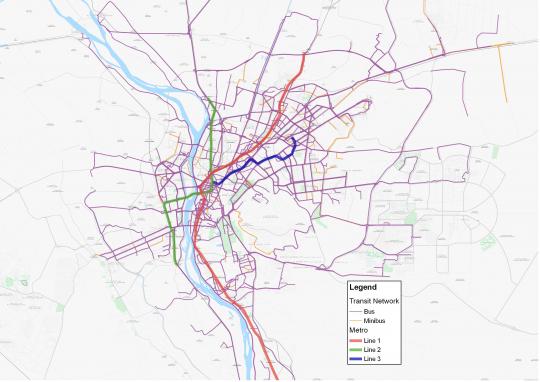 Having a digital map (GIS) and General Transit Feed Specifications (GTFS) details of a network allows a transit agency to do better service planning and monitoring, as well as provide information to its users. A traditional GIS software approach often requires a team of consultants and months of work.  Last month, however, we were presented with the challenge to use innovative tools do the same work in less than two weeks.

This was our first visit to Cairo, Egypt, and there we were tasked with the goal of mapping the city’s entire bus network (approximately 450 formal bus routes) in order to conduct an accessibility analysis with our new Accessibility Tool. At first hand this task seemed daunting, and a few days after arriving we were not certain that we could accomplish it in two weeks.

Before our trip, we had agreed on a somewhat flexible work plan, laying out an array of potential open-access, free tools that we could use depending on the scenarios we would encounter, mostly dependent on the availability of data.
Upon arrival, we reached out to our counterparts in the Cairo Transport Authority (CTA) and Cairo Traffic Engineering Bureau (CTEB). Fortunately, the availability of paper maps of the routes from the transit agency allowed us to use the quickest option: Transitmix, although this tool had never been used for such a task. In very little time (less than a week), we were able to sketch out the 450+ routes using this tool, download the routes as digital maps, and create the general specifications of the GTFS format.

We stayed in Cairo a couple of days to train the people from CTA on how to use Transitmix, in order for them to do a quality assurance process by checking and correcting any errors we could have made. The ease of use of this tool allows first-time users to quickly grow comfortable with it. Going forward, this will allow the Transit agency to update the digital maps, with any service, route or operational changes in the future.

We also believe that, by having the digitized data in the cloud, it can be better preserved with changes in government or administrations, as opposed to what we have seen in many other cities where the data sitting in a disk or a particular hard drive is often lost.

We also had the opportunity to meet with Cairo’s Governor, Dr. Galal Said, who was keen on making this work Open Data. Having the routes with the GTFS specifications will allow it to be integrated into trip planner services, such as Google Maps or any app that utilizes this format. This will allow anyone in Cairo to better understand the availability of services, and navigate the transit system with much more ease than before.

The availability of open-access, web-based tools has dramatically decreased the barriers to create GIS and GTFS datasets of transit systems around the world. These tools are free (or very low cost), easy to use and utilize web-based platforms, requiring no need for software or advanced hardware. Being able to quickly digitize the transit systems of cities around the world will allow for better service planning and monitoring.

Digital maps of public transportation supply services will also allow us to better understand how a mobility system is serving an urban area, combined with other planning tools (such as this Accessibility tool) and provide better routing information to the system’s users.

We want to thank our colleague Howaida Kamel, who provided us with invaluable support on the ground for making this project.
Topics
Digital Development
Transport
Countries
Egypt
Regions
Middle East and North Africa
Series
Open Data Thank you for your post :-)
Are there amy updates regarding the GTFS?

Great to hear about this work. We also have a number of GTFS tools that could be of assistance. Please feel free to contact us at https://addtransit.com

Hey great article!!
We have been working in a very similar project for the last 7 months which aims to ease commuting using public transportation in Cairo, Egypt through better understanding of the transportation network with the help of today's easily accessible technology.
In summary the goal is to have a mobile application, something like google maps app and a website, that provides a trip routing service for free.
So we would love to share our experience and thoughts about the project with you. And learn from your experience in Cairo.
So please if possible can you send me back to my email I included in this post. I will send you more information about the project and the team. Also ill walk you through our progress so far. We believe that discussing the project with experts like you will always lead to better quality, thus better serving people.