The Way We Move Will Define our Future 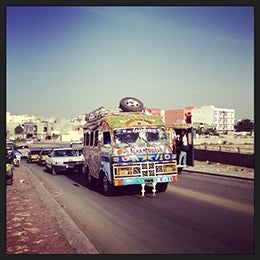 Mobility is a precondition for economic growth: mobility for access to jobs, education, health, and other services. Mobility of goods is also critical to supply world markets in our globalized economy. We could say that transport drives development.

But transport also contributes about 20 percent of global energy-related CO2 emissions. These emissions have increased by 1.7 percent annually since 2000.  And sixty percent of that increase is in non-OECD countries where economic growth has been accompanied by a surge in demand for motor vehicles.

The more the world urbanizes – and we’re forecast to be 70 percent urban-dwellers by 2050 – the more critical clean, efficient, safe transportation becomes.

This is a major challenge that countries face, but the good news is that the transition toward low-carbon transportation is affordable if countries combine policies to reduce GHG emissions with broader sector reforms aimed at maximizing local co-benefits.  (i.e. less congestion, less local pollution, better road safety, etc.)

And this, of course, also holds true for Africa.  Along with other colleagues and more than 200 participants from within the continent, we co-hosted with the Government of Senegal the Africa Transport Policy Forum in Dakar.  At this major annual event, we precisely discussed the challenges and opportunities that countries face for achieving more efficient and sustainable transportation.

As African economies continue to grow and expand, the transport sector becomes even more critical for promoting a people-centered, sustainable development agenda. Planning for affordable, safer and cleaner transport systems is a smart and cost-effective way to address people’s mobility needs and the impact of rapid urbanization across Africa.

Current transport trends in many countries are still too focused on individual car use rather than on mass transit. And in much of Africa, rural areas continue to be isolated from access to markets and essential services.

Greenhouse gas emissions from the transport sector are growing faster than from any other sector. Although Africa is not yet a major contributor of greenhouse gas emissions compared to other regions of the world, its high urbanization rate, quantity of imported cars per year, and low standards for acceptable vehicle emissions, are contributing to a growing emissions trend.

As outlined in a recent World Bank report, Turning the Right Corner, transport infrastructure investment today will define energy use and emissions over the next five to seven decades.  Thus, the failure to gear today’s investments to real prices of energy and emissions in the long-term will irreversibly lead to higher transport costs.

In other words, the way we move will define our future sustainability.

In this context, the developing world’s fast-growing cities have an opportunity right now – and an urgent need– to build such low-carbon transport systems before unsustainable land-use patterns become locked in.

Transport also needs a broader sector reform that recognizes the synergies between mitigating transport’s contributions to climate change and other externalities.

Congestion, for example, costs billions of dollars in lost time and productivity, and road traffic crashes cause nearly 1.3 million deaths each year around the world.

Revenues from fiscal incentives can also help the sector and the economy. For example, transport suffers from an endemic shortage of funding for infrastructure maintenance, and some of these revenues should be earmarked to end systematic underfunding.  The negative externalities of transport also provide room to increase taxes on its emissions, and decrease taxes on income and productive investments.

Low-emissions transport could then provide a double dividend by boosting people’s prosperity and income, as well as reducing poverty.

The good news is that it is possible to implement low-carbon transport policies. We see good examples across the world. Mexico City drastically reduced its pollution with tighter fuel regulations and a Metro bus system; today, over 20 million of its residents’ 32 million trips a day are on public transit.

Guangzhou’s greenway, bus rapid-transport system, and some 5,000 bike-share bikes are expected to cut 86,000 tons of CO2 per year over their first 10 years.

In Africa, the Bus Rapid Transit systems in Lagos, Cape Town and Johannesburg are interesting models as they provide quality service and affordability to millions of urban dwellers.

Although crucial in meeting the Millennium Development Goals, transport was somewhat forgotten or ignored when the MDGs were designed.  This time, however, the sector should be more explicitly recognized as a critical component of any sustainable and inclusive development strategy going forward, particularly as the international community tries to define a new set of sustainable development goals or SDGs in a post 2015 development agenda.

African countries at this policy forum are conscious that they cannot miss the opportunity to choose a more sustainable transport path.  This is essential for reducing poverty and boosting prosperity in a sustainable way. We need to support these efforts. The time to tackle the transport challenge is now.