“Will you take me for a 1,000 pesos?”— Making sure public transport subsidies really target the poor 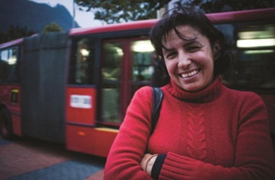 A commuter in Bogotá, Colombia
(World Bank)
When analyzing the modernization of Bogota’s extensive bus system, we read a lot of technical analyses on public transport business models, risks, incentives, etc. But in a city where 11,6% of the population lives below the poverty line, social reality trumps all theoretical studies. In a new report entitled The promise and challenges of integrating public transportation in Bogotá, experts from Embarq estimate that as many as 23% of bus users sometimes plea for discounted rides, asking the bus driver: “Will you take me for 1,000 pesos?”

This situation points to one of the toughest challenges faced by public transport systems: how to reconcile financial sustainability and social inclusion? On the one hand, if fares do not cover operational costs, systems need subsidies to survive, which can pose serious financial and political risks. In some cases, transport systems operating with inadequate financial resources may experience system deterioration, safety problems and service curtailment. On the other hand, if fares are set to reflect the real price of transport services so that operators can recoup their costs without subsidies, then the poor are often priced out. This is exactly the problem that Bogotá is currently struggling with, despite its well-deserved reputation for innovation and excellence in public transport: fares of its state-of-the-art Transmilenio Bus Rapid Transit (BRT) system are pegged at cost-recovery levels that may price out many of the city’s poorest. Recent studies show that the lowest income households in Bogotá (socioeconomic strata 1, 2, 3 according to the local classification) are already devoting 20-30% of their total income to transportation, spending more than US$2 daily.  The situation may be even worse when Bogota’s city-wide public transit reform (the Integrated Public Transport System or SITP) is fully implemented, as bus drivers, with the adoption of smart cards, may no longer be able to offer unofficial discounts to passengers at their discretion, a common practice in the traditional system.

To strike a balance between financial sustainability and social inclusiveness, research suggests that cities should set fares at a level that allows for cost recovery, and then offer targeted subsidies for the poor. In practice, however, offering targeted public transit subsidies for the poor has proved difficult. The first problem has been to accurately identify all the poor who should benefit from a subsidy – particularly those working and living outside the ‘formal’ sector, a vulnerable population that constitutes close to 50% of the population in Bogotá and other big cities in Latin America. Second, there have been implementation concerns, especially concerning subsidized tickets being resold in the secondary market and other forms of abuse that defeat the purpose of the targeted subsidies system. So, for lack of better targeting mechanisms, cities like Bogotá have traditionally granted subsidies to specific socio-demographic groups, such as students, the elderly or the disabled—policies that can make sense for a number of social reasons, but fall short in terms of directly targeting the poor.

But two recent developments suggest that change may be on the way:
In 2013, the Mayor of Bogotá asked the World Bank to collaborate on the design of such a targeted subsidy program. Supported by the Global Partnership on Output-Based Aid (GPOBA) and a Korean ICT trust fund, we supported a study that helped (i) identify the poor and their travel needs; (ii) develop indicators to measure the impact of alternative subsidy programs; (iii) assess the financial and operational impacts of alternative schemes on the existing public transport system; (iv) and develop an implementation and monitoring plan. City leadership was very engaged and in February 2014, Bogotá rolled-out its pro-poor transport subsidy program, which reflected the results of the GPOBA/Korean ICT-financed study and policy guidance. Thanks to this new initiative, social programs beneficiaries registered in the SISBEN database (categories 1 and 2) are now eligible for a 40% discount on public transit fares when using their transport smart card (the maximum number of discounted trips is capped at 21 rides per month).


There are still areas where this policy needs to be fine-tuned—improving the identification of potential beneficiaries, controlling abuse and leakages via use of smart card and other technologies, securing sustainable sources of funding (particularly via user charges from private auto users to generate cross-subsidies)—but the developments in Bogotá are exciting and create a public transport subsidy program that truly targets the poor.

The priority in the coming months is to assess the impact of the program—its penetration and use among the intended beneficiaries, impacts on their travel patterns and welfare outcomes, and any signs of abuse or unintended side effects. We look forward to reporting back on any lessons we may learn from Bogotá’s experience, as well as any other developments in the use of targeted subsidies to help public transport remain socially inclusive and financially sustainable.