2.3 Million Lives Lost: We Need a Culture of Resilience 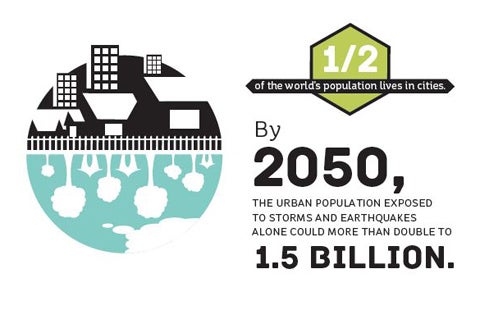 Looking at communities across our planet, there is a brutal lack of resilience in our modern lives. Cities have expanded without careful planning into flood- and storm-prone areas, destroying natural storm barriers and often leaving the poor to find shelter in the most vulnerable spots. Droughts, made more frequent by climate change, have taken a toll on crops, creating food shortages.

In the past 30 years, disasters have killed over 2.3 million people, about the population of Houston or all of Namibia.

The tsunami that struck Indonesia in 2004 killed 165,000 people and caused $4.5 billion in damage. Drought across the Horn of Africa from 2008 to 2010 left 13.3 million people facing food shortages. Millions there and across the Sahel still face dangerous food shortages as drought conditions have continued. The Haiti earthquake in 2010 claimed more than 220,000 lives and destroyed tens of thousands of buildings and homes, displacing1.5 million people and causing $7.8 billion in damages – 120% of the country’s GDP Flooding in Pakistan in 2010 claimed 1,985 lives and caused $10.1 billion in damage. Japan saw the devastation of an earthquake and tsunami last year that killed 20,000 and cost an estimated $210 billion.

Climate change and the intensity of extreme weather it is causing mean that the past is not a prologue of the future and uncertainty will increase in the years ahead. This threatens global efforts to eradicate poverty and threatens to push the vulnerable who have escaped absolutely poverty back into misery.

So what can we do about it?

We must invest in resilience as part of an effort to change the growth path to one that is green and more inclusive.

Urban planning is step one. Cities everywhere are seeing new homes, schools, hospitals and other infrastructure go up. They can ensure that these structures more earthquake-resistant, are built in less flood-prone areas, and don’t destroy natural storm protections, such as hillside forests and seaside mangroves. The principles of inclusive green growth can lead the way to more resilient communities that also reduce the greenhouse gas emissions contributing to climate change, as we'll be discussing on Monday at the Global Green Growth Forum in Copenhagen.

Construction standards and education are also vital. The earthquake and tsunami that hit Japan in 2011 showed how disaster risk management could limit the damage of a devastating natural disaster. Construction standards kept many buildings and homes standing through the violent shaking, and disaster risk management training in schools and on television saved countless lives. Every country, every government – where ever it is on its development trajectory – can take steps in that direction.

The international community can also do more.

Right now, disaster prevention and preparedness account for only 3.6% of disaster-related assistance, about $3.3 billion dollars. In contrast, nearly 70% goes to emergency response after disasters hit, and about a quarter goes into reconstruction and rehabilitation. We need to turn this around.

Proactive measures pay off in lives and property saved. On the island of Saint Lucia, the World Bank has supported research into landslide risk reduction since 2004 that led to slope drains being built in five communities that were vulnerable to landslides. When Hurricane Tomas struck in 2010, none of those communities were among the many reporting devastating landslides across the island.

This week, government ministers from around the world will be meeting in Sendai, Japan, near the epicenter of 2011 earthquake, to hear from disaster risk management experts. One goal of the two-day Sendai Dialogue is to build a global consensus around the need to build resilience. You can watch the sessions online. I’ll also be speaking on Oct. 10 at the live-streamed TEDxSendai with other leaders from the worlds of politics, science and art about disasters, resilience, hope and recovery.

We need a culture of prevention and resilience – and we need to invest in it.

Rachel,
I really like this blog article. I guess it is high time that the leaders of this world took a solid stand to increase global resilience. I hold that so far, the government's of the world have just adopted the 'Don't wake me up' attitude. See more here:

Your call to improve the resilience of our urban areas is a wise one. Climate-proofing our urban areas and infrastructure cannot be overemphasized. We just need to wake up from the bliss of ignorance and face the bare facts on climate change. The LDCs are more at risk, yet they have contributed the least to climate change as compared to their developed counterparts. We must embrace climate justice in this regard, for sustainable development.