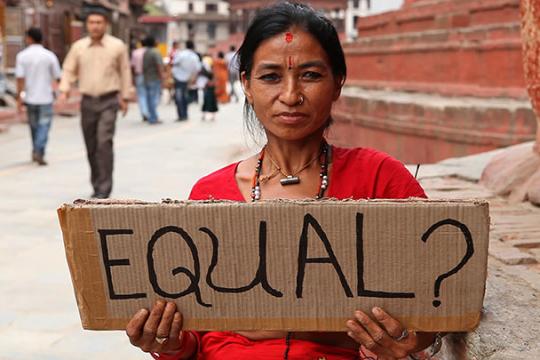 As we mark International Women’s Day, women and girls are better off than just a few decades ago. Boys and girls are going to school in equal numbers in many countries. Women are living longer, healthier lives.

But even with the steady progress we’ve seen over the past few decades, one of our biggest challenges today is to avoid falling prey to a sense of self-satisfaction.  We don’t deserve to, not yet.

We need a renewed sense of urgency and a clearer understanding of the remaining obstacles.   When it comes to improving the lives of women and girls, we have blind spots.  In fact, we know of three shocking inequalities that persist in education, the working world, and women’s very security and safety.

Blind Spot No. 1: Education of Girls.

We have made impressive gains in achieving universal access to education, but what we’re failing to see is that girls who are poor—those who are the most vulnerable—are getting left behind.

While wealthier girls in countries like India and Pakistan may be enrolled in school right alongside boys their age, among the poorest 20 percent of children, girls have on average five years less education than do boys.  In Niger, where only one in two girls attends primary school, just one in 10 goes to middle school, and stunningly only one in 50 goes to high school. That’s an outrage.

Even if girls in some countries are receiving more education, that education is not translating into opportunities in the workforce.

Let’s look at the Middle East and North Africa.  There, on average, only one in four women is in the workforce.  The rate of increase has been glacial —less than 0.2 percent annually—over the last 30 years. At this rate, the region will take 150 years to catch up to the current world average.

A study last year finds that women’s low economic participation creates income losses of 27 percent in the Middle East and North Africa. The same study estimates that raising female employment and entrepreneurship to male levels could improve average income by 19 percent in South Asia and 14 percent in Latin America.

Latin America offers a glimpse of promise for the future. There, rising education and falling fertility have expanded women's economic opportunities. This increased economic activity among women has translated into a reduction in poverty by about 30 percent and has helped insulate their households from the recent financial shocks.

Blind Spot No. 3: Violence Against Women.

One of the devastating realities about our world is the violence against women during wars and conflict.  It’s an unacceptable and relatively well documented problem of epidemic proportions.  But the kind of violence we are not talking about enough is domestic violence.

Globally, the most common form of violence women suffer is at the hands of their husbands, boyfriends, or partners. Worldwide, almost one third of all women who have been in a relationship have experienced such violence. That’s also an outrage.

If domestic violence continues to receive inadequate attention, it tells women they have less worth and less power than men. It undermines their ability to make choices and act on them independently, impacting not only them, but their families, communities, and economies.

What are our next steps? How do we address these blind spots? We need to draw more attention to the major constraints for women and girls that are right in front of us.

We cannot allow this to continue. We need to find ways to confront discrimination wherever we see it, in whatever form it appears. In particular, we need to further energize the movement for equality for half of the people on this planet, for all women and girls.

How do you think can we confront these blind spots on education, jobs, and safety for women and girls? Tell me your ideas. We need a global conversation now.

Estimates about the extent of honor violence in Western countries like the United States and Canada vary, primarily because these abuses often take place behind closed doors, and victims usually experience tremendous pressure from their families to remain silent. But we know that as many as a quarter of a million American girls and women have either suffered or are at risk of FGM – and the number of at-risk individuals actually increased by 35 percent between 1990 and 2000. Although most Western societies have outlawed FGM, the law can be circumvented through practices like “vacation cuttings,” where families take their daughters abroad to have the procedure performed.

I believe women have a worth of talent and have a lot to contribute to economic development. I agree that Domestic voilence is a globally issue and needs to be addressed for once and for all. I also agress that it does not only impact on the individual but on the children, families and the community as a whole.To a great extent, Domestic violence affects women's health and wellbeing in so many ways- depression, isolation, mental heath and especially HIV We need more men to stand up and fight against domestic Violence and give women the opportunty to indpendently make informed choices. Together we can stop violence against Women and girls.