A Little Less Conversation, A Little More Action on Oceans 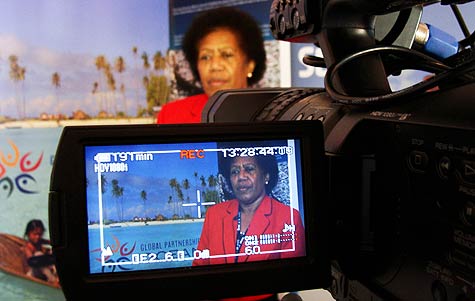 Taina Tagicakibau, permanent secretary for Fiji’s Environment Department, reaches out to a public audience during Rio +20 to explain the need for action to restore the world's oceans to health. Photos: Mariana Kaipper Ceratti/World Bank

It was an important day for the oceans at Rio +20. With negotiations around the Rio outcome text now reaching a crucial stage, it was good to get away from all the talk about words, to actually talk about action.

At the Global Ocean Forum – a gathering of ocean thinkers and doers on the sidelines of the Rio +20 conference – I announced the official birth of the Global Partnership for Oceans. It felt good to announce that 83 countries, civil society groups, private companies, research bodies and more have joined forced to make things happen for better managed, better protected oceans. Each of them has “signed on” (by email) to the Declaration for Healthy, Productive Oceans to Help Reduce Poverty (pdf). Read it and tell us what you think.

It has been inspiring to see the excitement that has gathered around this partnership. Country after country is now talking about the crisis facing oceans, the lack of action on all the unmet promises since the last Rio conference, and the fact that it’s time for all interests – public, private, non-government – to come together around innovative solutions.

It’s time for a global platform of action.

My colleague on the panel at the Global Ocean Forum, Arni Mathiesson from the UN Food and Agriculture Organization, reminded us that things in the blue world are pretty dire. He said that if things don’t change, with current population and GDP projections, the world will be facing a gap between supply of fish and demand by 2030. That means a very real and very near crisis for food security, for jobs, for the future economic activity of a very large number of countries. 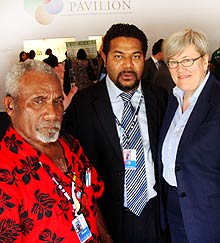 With 32% of the world’s ocean fisheries overexploited, depleted or recovering from depletion (up from 10% in 1970), and another 53% now fully exploited, we cannot keep going with business as usual. This creates an annual global efficiency loss of some $US50 billion – and that is bad news, not just for our oceans, but also for the 350 million people who depend on the oceans for their jobs and livelihoods and a billion more for food. For many, it’s a matter of life and death.

At the Global Ocean Forum, the permanent secretary for Fiji’s Environment Department, Taina Tagicakibau, put it best in an interview with a film crew on site.

“Oceans are our life and livelihoods," she said. "The Ocean is where we live. It’s not just water, it’s everything to us.”

We welcome Fiji and the many other coastal and small island states joining us in the Global Partnership for Oceans. With the publicly stated support of so many countries and organizations, the real work of the partnership begins. We are now in a good place to implement what emerges from this UN Conference on Sustainable Development. We have momentum. We have leadership. Now it's time for action.

Here are the goals listed in the declaration that the partnership will work toward meeting by 2022:

Sustainable seafood and livelihoods from capture fisheries and aquaculture

In line with previous internationally agreed commitments and taking into consideration growing impacts of climate change:

In line with previous internationally agreed targets and to address the growing impacts of climate change:

In line with previous internationally agreed commitments and taking into consideration the growing impacts of climate change: