Achieving Universal Financial Access by 2020: what the private sector, governments and multilaterals must do

What needs to happen for everyone in the world to have access to a transaction account by 2020? And, more importantly, why does it matter?

Some 700 million people worldwide gained access to an account between 2011 and 2014, but 2 billion still remain outside the formal financial system. The Universal Financial Access goal envisions that all adults will have access to a transaction account by 2020 to store money, pay bills, and send and receive payments. Such access can help people better manage risks and escape poverty. 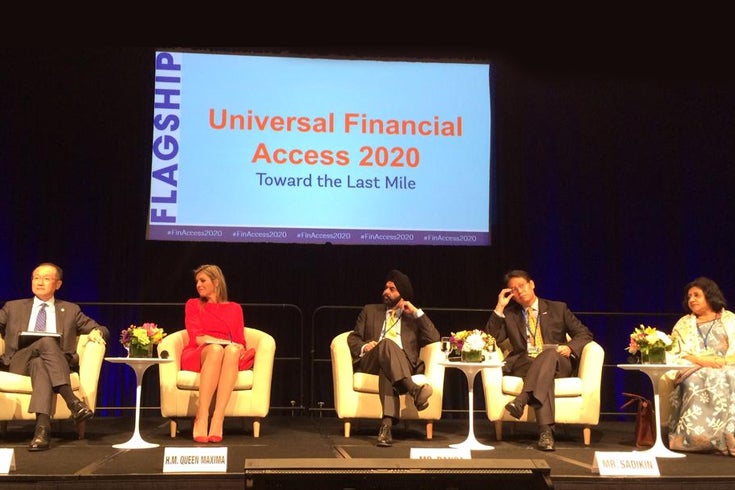 The panelists stressed the importance of public-private partnerships to expand financial access to millions of people, and discussed what role each can play to make it happen.

All panelists committed to what they can do and how many financially excluded people they plan to reach by extending their work and services. Other private-sector coalition partners, not present at the event, also pledged considerable commitments which were read onscreen.

The Bank Group will support governments and private sector to reach up to 1 billion people who are financially excluded. “The World Bank Group’s role is to convene and energize a coalition of partners -- and also to step up our work. Over the next five years, our institution commits to enabling as many as 1 billion adults who are now financially excluded to gain access to a transaction account,” said World Bank Group President Jim Yong Kim.

Public-private partnerships play a huge role in enabling sustainable and scalable financial access, said H.M. Queen Máxima of the Netherlands, the UN Secretary-General’s Special Advocate for Inclusive Finance for Development, noting the role that regulators have in creating an environment for the private sector to innovate.

Jaime Caruana, General Manager of Bank for International Settlements, talked about complementarity, proportionality, and cooperation as being are critical for a balanced approach.

However, as Ajay Banga, CEO of MasterCard, pointed out “It's not just access to accounts that matters, but usage of those accounts.” He added that technology isn't the issue, but that the focus should be on business models and scale.

Benno Ndulu, Governor of Central Bank of Tanzania, talked about the need to develop financial products that meet the needs of the unbanked. Tanzania cut in half the number of financially excluded in four years with new technology. “Innovation takes courage!” he said.

These accounts will benefit people and change the course of their lives, explained Arundhati Battacharya of State Bank of India, a country where 415 million adults are unbanked.

“If we reach Universal Financial access by 2020, we have a better change to end poverty by 2030,” concluded President Kim.

“When businesses and people have more access to finance, everyone benefits,” summed up Ban Ki-moon.

This was a follow up to an event from the 2013 World bank Group-IMF Annual Meetings, where President Kim and H.M. Queen Máxima of the Netherlands, the UN Secretary-General’s Special Advocate for Inclusive Finance for Development, called for universal financial access and set the year 2020 as the target date.