The question was on the pros and cons of HIV/AIDS funding and the tools were sharp insights and passionate views as some of the most influential figures in the fight against AIDS and poverty participated in a lively debate before a packed World Bank auditorium July 23.

The webcast event, co-hosted by the Bank, U.S. Agency for International Development/ U.S. President's Emergency Plan for AIDS Relief, and the medical journal The Lancet, asked a panel of experts to weigh global funding for HIV/AIDS in a fiscally strained, post financial crisis environment. The debate was part of the first International AIDS Conference to be held in Washington in 22 years.

The event was liveblogged in Arabic, English, French, and Spanish on World Bank Live. Members of the audience both at the event and online also took part using the #WBLive hashtag on Twitter.

“Investments in HIV can have much broader impacts on not only health systems but on … all kinds of things that will have effects beyond health care systems,” said Dr. Kim. “I think that’s a critical part of the discussion going forward.”

Added Shah: “There is so much we can accomplish by figuring out how we can work together more effectively in countries, standardize the things we measure, standardize the payment structures we offer our implementing partners and others, so we can help achieve the vision of a robust, locally driven and country owned health system.”

The debate was the sixth in a series sponsored by the Bank and USAID meant to explore HIV/AIDS issues and was moderated by Lancet Editor Richard Horton. The event trended in Washington on Twitter as a group of four panelists considered the motion: “Continued AIDS investments by donors and governments is a sound investment, even in a resource-constrained environment.”

AIDS financing currently amounts to about $17 billion annually in developing countries. Those benefits include money for hospitals and clinics and overall strengthening of health systems serving more people than HIV/AIDS patients. But there are also concerns that more money is going to combat AIDS than to other problems that could pay a bigger health dividend, such as infectious diseases, diarrhea, unclean water and lack of sanitation.

Roger England, chairman of the Health Systems Workshop, Grenada, and Mead Over , senior fellow, Center for Global Development, argued against the motion that AIDS financing remains a sound investment today.

Only the most effective and efficiently operated HIV/AIDS interventions “can even come close to competing with” the returns of measures to cut malaria and maternal deaths and vaccination campaigns, said Over. “Why is it in the resource-constrained environment we should prioritize AIDS above all these other tremendously important, vital ways to save lives?” he said.

England added that spending on AIDS prevention has had no measurable effect on the rate of new infections in low- and middle-income countries. The infection rate has been in decline since the mid-1990s – “a decade before the big money started to flow,” he said.

Arguing for continued AIDS investments,  Jeffrey Sachs, economist and director of the Earth Institute at Columbia University, said there is enough wealth in the world to up the investment to $40 billion “not just for AIDS, but for the range of primary health systems … Let’s put aside this myth that AIDS somehow takes away from the primary health systems. It builds it. For anyone who actually gets out of their office and gets into a village, you know that it is completely synergistic.” 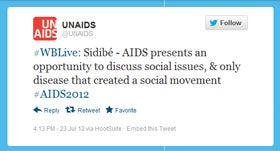 UNAIDS Executive Director Michel Sidibé said  AIDS investments changed the way services were delivered in developing countries and allowed AIDS treatment to be massively scaled-up – from less than 50,000 on treatment to more than 8 million. At the same time, the effort inspired a “social movement that helped break the conspiracy of silence” around AIDS and related issues, he said.

“With leadership, the investment in AIDS has really reduced morbidity, mortality, brought issues of social justice, created demand for services, social/civil movements, increased public-private investment, really energized community based movements, and I think the most important point I had—people were at the center of this response.”

In closing remarks, U.S. Global AIDS Coordinator Eric Goosby related his experience watching more than 500 patients die in the early days of the AIDS epidemic in San Francisco. He said the fight against AIDS has come a long way, but, “We are still hitting unmet needs. We are still a little over 50% of the way there.”

Now is not the time to stop, said former Botswana President Festus Mogae. While many people have died of the disease, many more have been saved, and many continue to be saved.

“When you go to war and you win battles and lose some, you don’t suddenly stop fighting just because you haven’t won yet.”