Celebrating 25 Years of the Montreal Protocol - and Looking Ahead 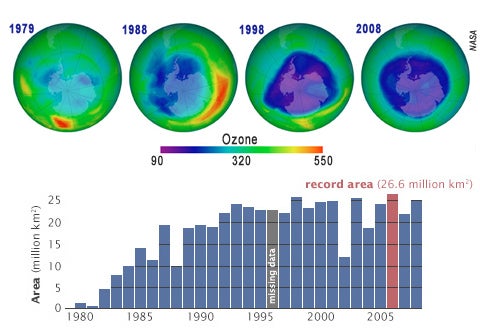 The world’s leaders set a high bar when they adopted the Montreal Protocol, which has helped protect the Earth’s protective ozone layer for the last 25 years. Even with its ambitious goals, the treaty won universal ratification – 197 parties have agreed to legally binding reduction targets to phase out ozone-depleting gases, and they have stuck to them.

The result: we, as a global community, have almost completely phased out the use of 97 substances that were depleting the ozone layer.

It’s a success worth celebrating, but we can’t rest on our laurels. We phased out CFCs, once used for cooling most refrigerators on the planet, but some of their replacement gases have become a climate change problem we still have to contend with.

The CFCs story showed that the world can move at speed and scale to reduce environmental threats. Scientists realized that CFCs were depleting the ozone layer in 1974. The ozone hole over Antarctica became common knowledge in the 1980s and helped drive global action which led to the Montreal Protocol being adopted in 1987.

The World Bank has since channeled nearly $1 billion to developing countries to phase out CFCs and other ozone-depleting substances. As an implementing agency of the Protocol’s Multilateral Fund, the Bank also helps countries with strategic planning, policies, and technical support.

We now know that CFCs and their interim replacement gases - like HCFCs and HFCs - are potent greenhouse gases that contribute to climate change. The Montreal Protocol, by controlling the consumption and production of these gases, has helped avoid 8 billion tons of CO2 per year – equivalent to the carbon emissions from some 1,900 power plants.

So what’s our next step?

The Climate and Clean Air Coalition, launched earlier this year, tries to build on the success of the Montreal Protocol. It targets short-lived climate pollutants - black carbon, methane and HFCs - which accelerate climate change. These are areas where we can make real progress for the environment and for human health while we move slowly forward on CO2. With the support of the World Bank, UNEP, and other organizations, 17 countries and the European Union have committed to reducing short-live climate pollutants in places where it’s technically and economically feasible at home and helping other countries take similar action.

We need safe alternatives that are affordable in the developing world - where demand is already higher than in developed countries. Scientists are working on these replacement refrigerants, and there are early signs of progress. That’s where the private sector’s leadership will be vital – making clean alternatives that are safe, affordable, and available globally.

The Montreal Protocol showed what the world could achieve when science, technology, and government leadership work together to protect the global commons. We need to push within in order to achieve more. We need like-minded coalitions to get stuff done where we can and where political leadership eludes us. But, more, we need the ambition and dedication of the many that conceived of the Montreal Protocol, including many past and present staff of the WBG, now more than ever.