Climate smart management for farms, forests and everything in between 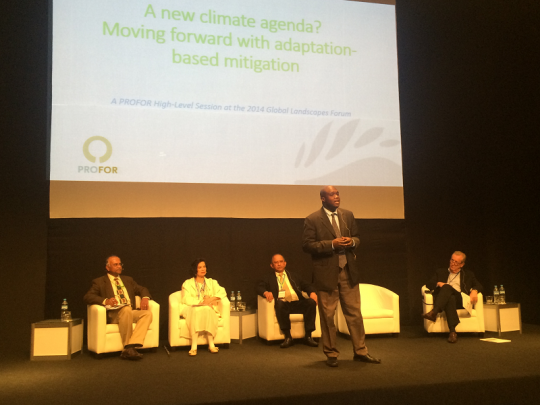 The energy at the Global Landscapes Forum held alongside the UNFCCC climate negotiations in Lima was electric—charged by the enthusiasm of the scientists, practitioners, indigenous peoples, investors, policy makers, youth and government negotiators who came together to share their latest innovations, tools and ideas for tackling climate change across land uses—from farms to forests and everything in between. Conversations were passionate as we discussed how to bring together our efforts to address climate change and achieve sustainable development at the landscape level—by working in a coordinated manner on agriculture, forests, water and more.

A notable shift at the 2014 Forum from previous ones, in addition to the mounting numbers in attendance (the event “sold out” with registration closing weeks early), was the buzz about adaptation. It permeated across panels and speakers, making clear the conversation on land-based sectors and climate change has moved well beyond mitigation. The Program on Forests (PROFOR) contributed to advancing the conversation by convening a high-level panel on “Moving forward with adaptation-based mitigation.”

Adaptation-based mitigation is a “win-win” approach that combines measures that can be taken to strengthen resilience to climate change with activities that help to bring carbon out of the atmosphere. For example, planting trees on farms to reduce the effect of extreme temperature or severe winds on soils and crops while also sequestering carbon. Put simply, it’s climate smart land management practices and it’s what we need to be doing.

Mark Burrows, Managing Director and Vice Chairman, Global Investment Banking Credit Suisse, shared the story of a mining company in Australia that decided to pay indigenous peoples to continue their traditional practice setting small bush fires to prevent massive forest fires—linking climate adaptation needs with mitigation benefits and income for those who live on the land. Thinking outside the box, he challenged us to explore and develop new financial instruments to finance adaptation-based mitigation such as green bonds for ecosystems.

Bianca Jagger, Founder and Chair of the Bianca Jagger Human Rights Foundation and Bonn Challenge Ambassador, turned our attention toward how forest landscape restoration with its proven track record and global movement, can advance adaptation-based mitigation. Building on Rachel Kyte’s remark at Forest Day 2011 that adaptation-based mitigation is a “no-regrets option,” Bianca said it was a “no-brainer.”

The call to action was loud, clear, and inspiring. However, the panelists did not veil the challenges ahead. To make adaptation-based mitigation a reality, we need to tackle weak capacity, unclear rights, carbon monitoring and innovative financing. The commitment and momentum coming out of the Forum has me optimistic that if we pull together and build our coalitions further we might just get there. This is a no-brainer that will take all of us putting our heads together to solve it.