Complicated vs. Complex Part I: Why Is Scaling Up So Elusive in Development: What Can Be Done? 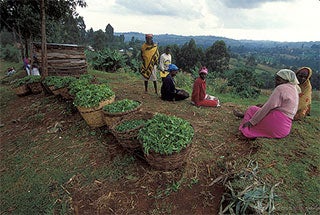 I recently had an opportunity to listen to retired army Colonel, Casey Haskins talk about what he learned about winning hearts and minds. Our conversation crossed strategy, history and eventually physics as he explained how states of matter relate to systems change. Understanding whether matter is solid, liquid, gas, or plasma greatly affects how you interact with it and ultimately how you can change it.

So what does this have to do with scale, global development and solving the world’s hardest problems? Quite a lot, I think. The four states of matter correspond to complex social systems.

Fortunately, few life situations correspond to chaotic systems (e.g. river rapids), and we know life is never truly simple (!) so most difficult situations we encounter are either complicated or complex. Building a bridge is complicated; managing traffic systems is complex. Planners and experts are very good at solving complicated problems where subject matter expertise is critical and methodical analysis leads to proper diagnosis and solutions.

The problem is that we’re not very good at distinguishing between complicated and complex systems. Complex problems require very different methods to solve. For starters, you can’t replicate a solution to a complex problem. And any one answer is unlikely to have a sustained impact. Promoting efficiency can lead to disastrous consequences because underlying conditions change (think traffic) and getting really good at doing the wrong thing is a big risk. In a recent speech, Sanjay Pradhan, vice president for change, knowledge and learning also described the immense complexity of cleaning the river Ganga. He described how this problem transcends several sectors and multiple stakeholders and requires more than mere technical fixes.

Increasing agricultural productivity in Sub-Saharan Africa is a good example. If we approach it as a complicated problem, we start with improved seed varieties and changing agricultural practices (e.g. adding fertilizers). Many calls for an African green revolution are based on this diagnosis. What this ignores, however, is the interplay between farming practice, climate change, and resilience ecology. The problem is complex especially in the context of climate change. I recall a colleague explaining that illiterate farmers in Northern Kenya could remember rainfall patterns for more than a decade and apply them to cropping patterns and rotation. And when outside experts insisted on using a more limited number of high-yielding seeds, farmers resisted since they were playing the long-game (thankfully). They implicitly understood climate variation and insisted that what worked in one area or region may not work in another. Local expertise and knowledge mattered a great deal.

But if we continue treating complex problems as complicated (ie solvable by an algorithm or technical fix), we will continue to prescribe remedies with little regard for context and variation. At the World Bank, we’ve learned over the past 50 years that building roads, dams and schools is not the same as reforming healthcare, improving education, and changing water distribution systems. These are problems that require hypothesis formulation and testing, gathering feedback, adapting and iterating. There are no instant solutions on tap. We need eyes and ears on the ground, constant tweaking, and robust feedback systems that allow us to learn as we do. Great article. Thanks so much for introducing me to the Cynefin Framework.

Thanks Aleem.
I agree the distinction between "complicated" and "complex" is useful; and your example of "building a bridge" vs "managing traffic" is a good one.
But in general I don't think the simple / complicated / complex / chaotic distinction is useful, for a few reasons:
a. it ignores the distinction between stochastic and non-stochastic processes.
b. "chaos" has a specific meaning in non-linear systems which is not correctly captured by "no relationship between cause and effect".
c. a process can be "simple" and still be unpredictable. For example, simple non-linear systems can be chaotic.
Owen

I think the Cynefrin frameworks obscures the most important distinction, which is between linear and complex systems. Complex systems can be simple or complicated, just as linear systems can be. The most important distinction is that a single intervention in a complex system does not necessarily produce any result, whereas a single intervention in a linear system (no matter how complicated) must always produce some result. That, and the recognition that almost all systems important for development are complex rather than linear.
I agree that we need eyes and ears on the ground to deal successfully with complex systems. That is why I am frustrated that the World Bank continues to rely primarily on super-educated technical specialists who occasionally drop in with "best practices" solutions, while it does not seem able to recruit and retain people who are willing to stick it out for the long term in hardship posts. This is rational from the private perspective of the individual experts, but not conducive to solving problems in complex systems.

Mr Cameron spoke out in the open: all fully checkable on the Electoral
Commission's website. 'Eyebrows were raised last year when
david cameron Mr Cameron claimed he could not thank them enough for that.
A social housing applicant would have to fess up to his promise of squeaky-clean standards.
This is one of the fixtures of Britain's music calendar.

This is such an interesting way of looking at how we approach challenges. Particularly transportation challenges. Having sat through 'Transforming Transportation' last January, it is clear that the WB does not ascribe to the perspective that transportation is complex. They promote resolving the challenges by imposing incredibly expensive scalable solutions that might work in some places but not only might not work in others, but also have disastrous consequences on the societies that surround the imposed solutions. How do we change the approach?

Cynefin and Complexity Theory
Dear Aleem
I have been working on this area for a while and notice that cynefin was originally about how different communities within large organisations perceive problems. The observation that the mathematics of chaos and complexity show how systems can switch from stability to instability is highly important. However, some researchers have cautioned that such ideas can often be applied primarily as a metaphor rather than as theory and technique. It was interesting therefore to see the book by Ben Ramalingam, Aid of the Edge of Chaos (http://aidontheedge.info/). This applies complexity theory modelling to international aid, noting that the institutional perspective is often anchored in a logic of organisational structure that is ineffective. This provides a bridge between complexity modelling and cynefin's sense-making. I wondered if you were familiar with this work and if so what your thoughts on it might be?
Best wishes. AA

Thanks Aleem!
I agree with your points. Few of us understand the ground problem for scaling up in development context. I have been working in this area in Ethiopia and i understand the complexity of the problem that can't be solved by outsider experts unless it is contextualized at local level. For this to help us deal with the complex problem we go to communities to listen to their problems and facilitate prioritization and support them to plan and act on it with backstopping from experts. It is not easy to bring all stakeholders in an innovation platform where experts/scientists listen to local farmers and experts. it is time taking but in the end most of the actors amazed by changes gained by this approach. Best, ZL