Ending poverty means closing the gaps between women and men 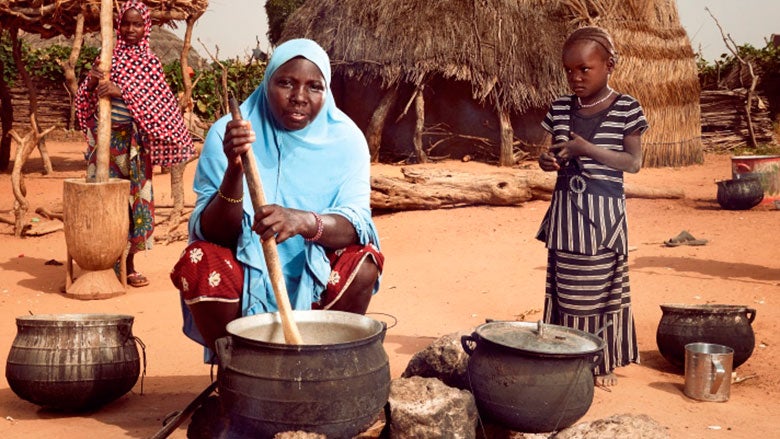 The world is a better place for women and girls in 2016 than even a decade ago. But not for everyone, and definitely not everywhere: This is especially true in the world’s poorest, most fragile countries.

It’s also particularly true regarding women’s economic opportunities. Gender gaps in employment, business, and access to finance hold back not just individuals but whole economies—at a time when we sorely need to boost growth and create new jobs globally.

Some solutions to this problem are simple and others more complex, but all demand expanded investment to effectively boost school enrollment and completion rates, reduce deaths in childbirth, and get more women into good jobs with access to financial services and assets.

The World Bank Group’s new Gender Equality Strategy charts an ambitious course forward by focusing on approaches and interventions that achieve concrete results. Our strategy draws on a reservoir of data and evidence—gathered largely over the last decade and a half—that points toward specific policy actions to close gaps and expand equal opportunity for all.

First, we need to make sure that women are living longer and healthier lives and many more girls are getting the education they want and need. But in the poorest countries, maternal mortality remains unacceptably high, while many women still lack access to basic reproductive health services. Despite some significant gains, an estimated 62 million girls globally are out of school—while an unacceptable number of women still die needlessly in childbirth or from related causes every day.

The World Bank’s initiative in the Sahel, one of the poorest and most fragile areas in the world, aims to improve women’s access to reproductive and maternal healthcare. We are also scaling up investment in girls’ education, with US$2.5 billion to be disbursed over the next five years that will directly benefit adolescent girls, who often fail to transition from school to employment.

The second area that needs our attention is closing gaps in economic opportunity. Globally, women’s labor force participation has stagnated and even slightly fallen in some places. Women remain half as likely as men to have full-time wage jobs. Those who have paid work earn up to one-third less than men, partly as a result of occupational sex segregation.

Our Adolescent Girls Initiative piloted and rigorously evaluated innovative interventions that included business development training, technical and vocational training targeting skills in high demand, and life skills training. In Liberia, for example, it trained about 2,500 young women, with an emphasis on job placement and follow-up support. Through the project, employment rose by 47 percent while earnings increased by 80 percent.

Third is improving financial access. In many countries, women face legal and social barriers that prevent them from owning or inheriting assets, opening bank accounts, or accessing credit on their own. Female-owned businesses are generally smaller, with fewer employees, and they are more likely to be home-based. The credit gap for formal women-owned small and medium-sized enterprises is estimated at about US$300 billion globally. Nor is the gender gap in account ownership closing. In 2014, 58 percent of women had an account, compared to 65 percent of men—a 7 percent gap.

Finally, we need to promote policies and reforms that give women more voice, in public and at home. This requires actions to change laws and social norms. And men and boys must be part of this.

There is some good news: More women hold parliamentary seats than ever before, while our research shows that 127 economies now have legislation against domestic violence, up from almost none 25 years ago. But 90% of economies covered in our survey, including developed and developing economies, have at least one law impeding women’s economic opportunities. In 100 economies, women are not allowed to work in jobs such as truck drivers, plumbers, carpenters, welders, and sailors.

Addressing the global epidemic of gender-based violence is vital. The Bank Group is supporting programs to reduce and respond to violence, to improve the safety and security of women in public transport systems and at work; and we are developing health and livelihood approaches for women in conflict areas who are at risk of displacement, violence, and rape. We are also exchanging best practices with other development organizations on how to integrate violence prevention and response into their work—and we are innovating.

Gaps in what we know about women and girls are huge, particularly in the poorest countries. This makes the task of diagnosing challenges, designing solutions, and benchmarking progress far more difficult. The Bank Group is working with UN agencies and other partners to address these data gaps—in vital statistics, asset ownership, time use, labor, health, welfare, and uptake of financial services.

Data gaps are particularly acute among the world’s poorest countries where more equality for women and girls will have a critical impact on poverty. Other data initiatives include Women, Business and the Law, Global Findex, the new Identification for Development (ID4D) Initiative, and support to the private sector to collect sex-disaggregated data.

Smart investments and sound policies that advance gender equality will be game-changers in building a more resilient, peaceful, and prosperous world. We know much better what works to achieve our goals—and the World Bank Group is resolved and ready to work with partners to get there.

This article was originally published in the Huffington Post.

Disparity has been a major drawback and we must do away with it by closing the gap between gender. Inclusivity for all gender is critical in fighting poverty.

Women indeed will be very instrumental in ending extreme poverty in the world ; but for any serious achievement to be recorded in Africa, education must be pivotal due to the prevalent discrimination in training male children ahead of their female counterparts thereby limiting their ambitions in life.