The Western Balkans – How Not to Waste a Good Crisis

With a double dip recession––after just two years of sluggish recovery––now taking hold across the Western Balkans it is time for policy makers to begin looking at ways the ongoing financial crisis can be leveraged to bring about lasting fiscal reform in these countries. After just two years of sluggish recovery, these countries as a group––Albania, Bosnia and Herzegovina, Kosovo, FYR Macedonia, Montenegro, and Serbia––are experiencing a drop in real GDP by 0.6 percent and it is now clear that the road to recovery in 2013 will be arduous. Although the ongoing global crisis continues to negatively impact the region – leading to fiscal pressures and increases in unemployment – this situation also represents an opportunity for governments to accelerate reforms that otherwise could be delayed under more “business as usual” conditions.

Over the past four years, low or negative growth, weak government revenues, fiscal deficits, and steady borrowing across the region have defined the tough fiscal environments of nearly all of the six Western Balkan countries. The impacts of the ongoing global financial crisis have exposed the vulnerabilities of these small economies and have forced the issue of accelerated reform to the fore of the policy agenda. Moreover, the Eurozone crisis, watched closely by the policymakers and the public in the Balkans, carries the important lesson that timely reform can be much more beneficial and less painful than reform after a full blown crisis. For example, increased public debt over the last several years has resulted in some Western Balkan countries becoming acutely vulnerable to the economic shocks of today’s global financial setting. Albania, Serbia, and Montenegro now have public debt-to-GDP ratios that are too high and should be reduced significantly in the medium term. Debt in Bosnia and Herzegovina should also be reduced.

In the new constrained environment, more and more governments are learning they have to keep improving their business environment just to stay in place in regards to competition with other countries, as reflected, for example, in Doing Business indicator ratings. In addition to reducing debt, governments and policies makers should utilize this time to accelerate structural reforms (especially in public sector governance, the investment climate, and labor markets). In order to advance in these critical areas it is imperative that countries across the region push smart fiscal consolidation to the top of their fiscal strategy––cutting waste and unproductive expenditures while clearing accumulated payment arrears and protecting critical public infrastructure and social spending which targets the neediest. Simultaneously, these countries should promote the implementation of measures which can help improve their investment climates.

For a positive example of how such a course in an increasingly difficult environment, countries across the region need to look no further than the Former Yugoslav Republic of Macedonia – a country which shares similar institutions and development challenges with other Balkan countries. In terms of improving the ease of doing business, FYR Macedonia continues to be a regional champion, ranking 23rd (out of 185 countries) on the Doing Business scale. The government in FYR Macedonia has made important strides in recent years in removing regulations on property, enforcing contracts, reducing barriers for starting a business, and improving regulations on permits. As a result of these structural changes and other reforms, FYR Macedonia has attracted manufacturing foreign direct investments and has seen some decrease in unemployment since 2008 (albeit from a high base) – while some of their neighbors have witnessed drastic increases. 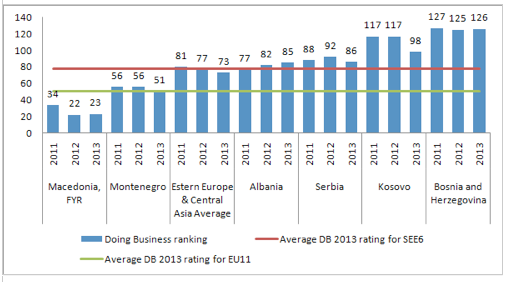 If such accelerated reforms materialize throughout the region, this could help improve productivity, attract more investments and financing and ease the transition to more sustained growth in medium term – leading to greater efficiency of investments, prospects for growth, and job creation on a regional scale.

More information on the Double Dip recession in the Western Balkans can be found in the latest South East Europe Regular Economic Report: www.worldbank.org/eca/seerer