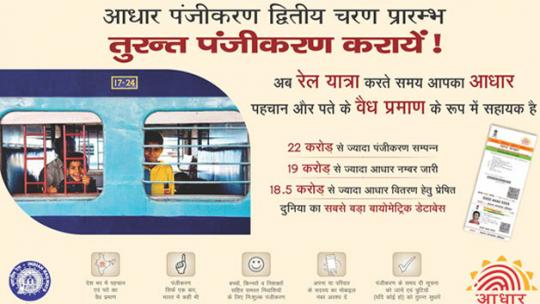 ​When it comes to ID systems, India's Aadhaar initiative sets a high bar for the rest of the world. Aadhaar is a state-of-the-art online system that provides unique 12-digit ID numbers to residents of India. These numbers can be used for a wide range of public and private services.

On April 24, World Bank Group President Jim Yong Kim welcomed Nandan Nilekani, the Chairman of the Unique Identification Authority of India – the agency that created Aadhaar, for a discussion on the science of delivering online IDs to over a billion people.

"This could be the greatest poverty killer app we've ever seen," Kim said in his introductory remarks.

During a keynote presentation, Nilekani stressed how Aadhaar can give individuals access to finance, healthcare, and government services.

Aadhaar has already registered over 300 million people in its cloud database. Eventually the system will register all of India's 1.2 billion residents – but that's not all its set out to do. Aadhaar encourages innovation through an interface open to private and public applications. One of its first major applications, for example, will use the unique IDs to electronically distribute funds to millions of people by the end of 2013.

"We answer the question, ‘Who am I?' And then we expect innovations to be built on top of this," said Nilekani. "Hopefully in the next 5–10 years there will be a whole ecosystem of apps that will bring more and more benefits to people who don't have an ID."

Nilekani entered government with the goal of getting IDs into the hands of millions of Indians. He wanted to create a system that enabled social inclusion and made government more efficient, effective, and equitable. Aadhaar now enrolls one million new people per day.

"At scale up of a million per day you could think of making this available in places like Africa," said Kim. He went on to ask, "What have been your thoughts about working on a global scale?"

Nilekani explained that his focus is on India, but he does want to make the system sharable for any country to use.

An online question from India asked, "How can the World Bank replicate Aadhaar and end poverty by 2030?"

Later Kim noted, "If we are going to end poverty by 2030, all of us at the World Bank Group have to really spread out to every corner of the world and find where these innovations are taking place and then bring them back." "I see this as the beginning of an institution-wide conversation about how we can make this system work for everybody."

Find out more about Aadhaar and how it is changing lives in India by watching the event and replaying the live blog coverage on World Bank Live.

This is making too much of a simple and mundane people identification program. We cannot end poverty by merely identifying an individual. In a country which has around 11% internet penetration, it is too early to say that the Aadhar card will bring economic transformation particularly in rural areas where poverty is predominant.

Many African countries already provide ID numbers for their citizens. For me, the biggest challenge would be giving all these people access to a web interface.
Id be interested to know how this would work in practise. Theoretically, if its just about ID numbers Im not sure I see the innovation. Perbaps Im missing something?

People used to have many problems opening bank accounts, getting driving license, buying properties etc. in different parts of the countries. Buy after you have this Aadhaar card every Indian citizen won't face this problem. And the best part is that everyone can be tracked with this unique IDs. Probably this is most innovative thing the Indian government has done in this decade. Poor people will get their benefits, and corruption will be stopped somehow.

As an Indian citizen, I have witnessed numerous instances where lack of govt streamlined services like Healthcare, PDS etc are brazenly manipulated by middlemen agents, bureaucrats and even politicians. Aadhaar may well be a blessing to every Indian as many of the govt services will directly reach them. I remember an instance of watching a documentary on television where a group of Americans who were not getting proper treatment in the US went to Cuba and got treated there for Free. When they asked the doctor for his fees they were told It will be paid by the govt. The look of amazement and gratitude on the faces of those Americans is still clear to me to this day. I am sure one day even our citizens will feel the same way when important benefits and services reach them at crucial times. Thank u to Mr. Nilekani and everyone associated with Aadhaar. And more imp - Thank U God for everything.