The World Bank Group is one of the world’s largest sources of funding and knowledge for developing countries. A new audio series launching on January 30th will examine data, research and solutions for the global development challenges.

Raka and Paul discuss the forthcoming show, why the Bank is producing it, what listeners can expect, and how they can listen.

Raka Banerjee: Paul, we have this new podcast coming out. What can people expect?

Paul Blake: Yes – we’re launching at the end of January, and we’re calling it The Development Podcast. It’s going to cover a range of topics, because the Bank works across a ton of different areas. And – on that – it’s really a chance to highlight and explain the biggest challenges facing the global community at this time of great change, and what solutions the Bank and others are coming up with to address them. I’m fairly new to the Bank, having just started around 4 months ago, so I’m still learning about all the various aspects of global development. But you’ve been here for quite a while, no?

Raka: I’ve been here for a decade! But I still feel like I’ve barely scratched the surface of the Bank’s work – all the research and knowledge being generated, all the projects being done with client countries...

Paul: And that’s what makes this podcast so exciting – it’s going to be different than other podcast offerings (both from the Bank and similar institutions), in that it’s going to be the flagship audio product from the Bank, taking a big picture view of global development, while going deep in each episode on a different issue. Crucially, we really want to try to give a voice to the people whose lives are being touched by the work of the Bank and its partners. 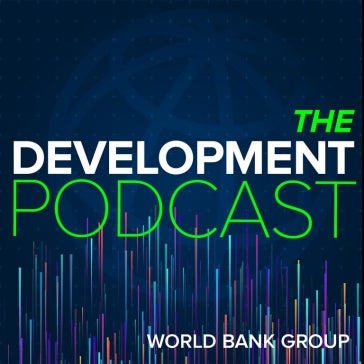 Raka: Exactly! And as a data geek, I’m also particularly looking forward to getting into the data behind all these different issues we care about in development – from obesity and nutrition, to energy and climate, to agriculture and food security, to entrepreneurship and jobs, and more. By the way, Paul, since you’re the one putting together each episode editorially and technically, will there be a fixed format?

Paul: So at least initially, I think each episode will tackle one big issue. The early episodes we’re planning are looking at topics like entrepreneurship, obesity, and gender equality. The episodes themselves will feature a quick dive into the data behind that issue – that’s where you come in, Raka! From there we’ll talk to people on the ground – those either working to tackle the issue of the day, or those who are affected by it. And in the third act, we’ll speak to the world’s leading researchers, economists, and analysts who are developing and implementing solutions to these challenges.

Raka: Before I forget, perhaps I should explain a bit about who we think might be interested in the Development Podcast. Really it’s an open invitation to anyone who is even remotely interested in global development, economics, and affairs – whether you are an economist, a student studying these issues, a professor at a university, or just someone who enjoys reading the “World” section of a newspaper and wants to learn a bit more about what’s going on beyond the headlines.

Paul: I couldn’t agree more. I really hope and think there will be something for anyone who has an interest in the world here.

Raka: Let’s chat a little bit about why we’re hosting this new series.

Paul: Sure. I’m not an economist – I’m a journalist by training. Before the Bank, I was a business reporter for BBC News and before that ABC News. I’ve worked for a few other companies, covering everything from economics to politics to natural disasters and more. But, you’ve got a little bit of a different background…

Raka: Yes, I am on the geekier side – I work for the Development Data Group, where we collect, curate, and share data to help inform development policy.

Paul: We should make a great pair – able to chat about and explain the issues, while creating a compelling and engaging product that keeps people listening.

Raka: Speaking of  listening, where can people find it?

Paul: In short: wherever you get your podcasts – Apple, Spotify, Stitcher and Radio Public. We hope anyone interested will give us a listen, subscribe, rate us, and comment with their feedback. It’ll help make each episode better than the last! Quite a strategic move to further reinforce the essence of doing things right in Africa for deafening impact! Bring it on, we are eagerly waiting!!

This is great idea that makes possible for many people around the world To understand and become familiar of gear work That Bank is doing in different areas of development issues affecting the lives of many people. please send the link.

Please send me the link

I am interested in participating in your forthcoming pod casts. How do I connect when the programme starts. Thanks.

I would like to hear about developments on the level of mindsets and ethics, I mean something further than poverty and shelter which are fundamental to our existence,,,
But as humans, and different from other beings with the consciousness we have, I believe we need to deal with it, further than dealing with our physical existence.
I would like to hear about development in integrity and fair practices, about equality and justice.
I have collected these thoughts after contemplating in the bitter experience I had with a humanitarian organization which is blatantly practicing a corrupt hiring process, like the majority of NGOs in my country.

Hi, I wish to hear about development on the level of mindsets and ethics. something beyond food and shelter which are fundamental to our existence.
But as humans, different from other beings with the consciousness we have, we need to practice this humanity and protect this consciousness against what harm us more than poverty, against injustice, inequality and corruption.
I hope to hear about a better world, not a better forest or beehive.
I have collected these thought after contemplation in the bitter experience I had with a humanitarian organization that blatantly practices a corrupt hiring process, like the majority of NGOs in my country..
I am wondering, If they bring in food and shelter, and simultaneously promote corruption (which is the root of this crisis). How can such practice be considered as development?

It is a great idea please send the link.

great initiative; looking forward to this !

A new approach. Hopefully it will get a wide audience. Please send the link.

Hi
I can't wait
Will it be available on NPR one?

This is a great idea. I would be very keen to be a part of this process. As a Nepali firm, we already work for World Bank in Nepal, and would like to contribute to this process.

I want to receive topics

I look forward to listening to these podcasts. I trust the World Bank to provide informative podcasts backed by reliable and verifiable data.

I will love to get the podcasts, thank you

Looking forward to it

Will help to have an insights from the world.

Plz send the link,Thank you

Hello, Will this be available in Spanish? Thanks

This is the way to go. Growing capital in Kenya & Africa through knowledge & research is not only timely but also encouraging 🙏

Hi this is a great idea! How do I subscribe to this podcast?