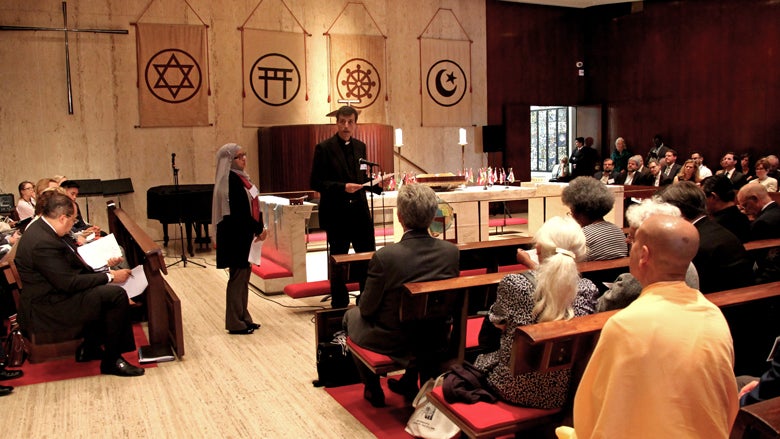 Last Thursday, over 140 faith-based organization and religious leaders, World Bank and UN officials, and UN ambassadors filled the chapel of the UN Church Center.  At an unusual but moving side event for the UN General Assembly, participants celebrated progress that has been achieved through the Millennium Development Goals and highlighted the critical role that faith organizations will play working alongside other development partners to help end extreme poverty and realize the Sustainable Development Goals (SDGs).

The event included remarks by Thomas Gass, Assistant Secretary-General for Policy Coordination and Inter-Agency Affairs, and Ambassador David Donoghue, who had the daunting role of co-chairing the process of negotiations around the SDGs. Part of what made the event so meaningful was the spirit of collaboration between the World Bank, the United Nations, and a broad coalition of faith-based and religious organizations who organized the event. The event’s timing following Yom Kippur and on Eid-al-Alha provided deep religious context.

During the event, faith leaders introduced a Faith-Based Action Framework to End Extreme Poverty and Realize the SDGS, which had been developed in the months prior. During a strategy session that morning, over 70 faith-based organization and religious leaders discussed and affirmed the framework.

The framework builds on the “Ending Extreme Poverty: A Moral and Spiritual Imperative” statement and initiative, which a diverse group of multi-religious leaders drafted and launched with the Bank’s support in April.
The framework is organized around three pillars, which include: strengthening the evidence base around the contribution and impact of faith organizations in helping to end extreme poverty; engaging in advocacy efforts to hold governments and other stakeholder accountable for the successful implementation of the SDGs; and enhancing effective collaboration between faith-inspired organizations and the World Bank, the United Nations, and governments. The event helped to establish a precedent in which the contributions of faith-inspired organizations are better understood and more concerted efforts are made to build effective partnerships from the onset of the SDGs.

Achieving the SDGs will require more than simply technical fixes and solutions but changes in hearts and minds.  Religious speakers highlighted the need to normalize and mainstream engagement with faith-based organizations and religious communities across the World Bank and UN system.  Other speakers reminded us that faith communities have been deeply engaged in development work for millennia and that many of the SDGs are already embedded in the DNA of many religious traditions. For example, faith organizations have a long track record of caring for the most vulnerable, providing assistance in times of disaster, promoting stewardship of the environment, and advocating to protect human dignity. Religious communities are also well positioned to popularize and socialize the SDGs in ways that connect to people’s core values and conscience.

Mahmoud Mohieldin, Corporate Secretary and President’s Special Envoy, spoke on behalf of President Kim and the World Bank Group, highlighting in his closing remarks a series of ways in which the Bank can benefit from deeper engagement with faith actors. Mohieldin emphasized that the Bank must rely on many faith organizations to lend greater meaning and put a human face behind the numbers and the data that measure progress. He also solicited the support of faith organizations in helping the Bank gather evidence from the field of what works and what doesn’t and noted that there are many places that the Bank can’t reach but faith organizations can.

An Ethiopian proverb says that “when spider webs unite they can entangle a lion.” Last week’s event helped to weave a much stronger web of collaboration, mutual understanding, and shared action between faith actors and the the World Bank and UN system. Identifying opportunities for greater collaboration across the Bank’s Global Practices and country offices will further enable the faith-inspired organizations to better harness their distinct assets and capabilities to improve development delivery and outcomes. Despite the inevitable challenges associated with forging stronger partnerships, the event signaled that faith-inspired organizations are ready to seize the opportunity behind Agenda 2030 and stand ready to build bold and more innovative partnerships with the Bank and UN.­­­­­­­­­­­­ In Pakistan and other countries of region, development has been restricted to few parts and the fields, leaving vast regions behind in the fields of development. There is need of inclusive development to help underdeveloped regions at par with the developed areas.

Wonderful to see; well done, everybody.

This is the right way for the religious leaders to come together and work for a common goal.. "ENDING POVERTY and raising the standard of human living".. I only hope and pray that all resolutions taken and passed will not just remain on paper but it should reach out to the helpless and the needy.... actions surely speak louder than words... I would love to help in any way possible..

This post has been enlightening to me. We are about to meet for the same purpose in Buenos Aires next week (29th 30 th March 2016) to build our own framework on the “Ending Extreme Poverty: A Moral and Spiritual Imperative” statement and initiative focus in Latin America and Caribbean region.