Apps have revolutionized everything from getting to work, keeping in touch with faraway friends, and dating (though the jury’s still out on this one). Can apps be the salvation of the world’s farms that are under two hectares in size – a group that most people think is going the same way as humans in Planet of the Apes?

Economies of scale in agriculture (or any other sector) occur when the average cost per unit of production decreases as farm size increases and conventional wisdom suggests that farms need to get bigger to be competitive. And this is exactly what is happening in richer countries, though the trend is less clear in poorer countries.

Farming is a complex business with many inputs and outputs and when you’re small, it’s very hard to compete on costs against those that are big. Small farmers may exist in our imagination as humble, hardworking, salt-of-the-earth men and women satisfied by long work days and healthy living, but this imagery doesn’t square with reality. For the majority, the work is backbreaking, and the money is meagre.

What most don’t know though, is that small farms can be 50% more productive than large ones according to the FAO’s Smallholders Data Portrait. This is known as the inverse productivity relationship and leads one to wonder what would happen if the cost of doing business was lower for smallholders? Could they become even more productive, settling the “bigger is better” debate decisively in favor of the smaller and more-nimble ‘Davids’ of the world? 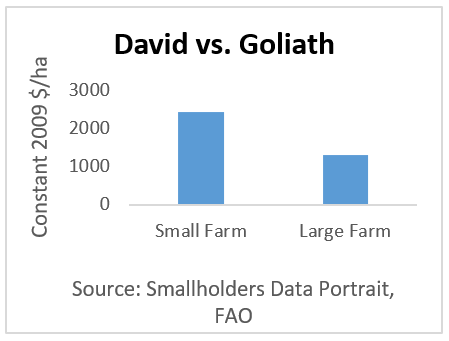 As it turns out, digital platforms may be just the thing to make this happen. Think of how Amazon puts an entire mall at your finger-tips and on your door-step and imagine the endless possibilities for the complex business of farming. Apps can flip traditional economies of scale on their head by substantially reducing farmer’s transaction costs, effectively reducing the size at which farmers are viable and ensuring their integration in new markets.

ITC e-Choupal, an Indian conglomerate, is pointing the way to this future. E-Choupal are internet kiosks located in Indian villages that provide information on weather, soil quality, markets, and crop inputs and prices at no cost to farmers. This free information enables them to increase their productivity and income by improving their yields, growing more suitable crops, and reducing the exploitative power of the middlemen who buy their products. ITC does not only offer market information and services, it also offers informational sessions that teach farmers modern agricultural techniques. Overall, e-Choupal kiosks are located in over 40,000 villages in India, reaching over 4 million farmers. Think about the boon to small farmers if the e-Choupal model leapt from kiosks in villages and straight into farmers’ pockets.

Imagine what the world would look like if small farmers could indeed compete with massive agri-businesses and the potential development impact this would have on the world’s rural poor. While witnessing that we have stayed on the same planet throughout – like in Planet of the Apes - we would be completely turning the rules of the game upside down. Now we just need to figure out what the role of public policy is in making this happen.

We hope to crowd-in some of the world’s best minds to participate in a global conversation on food and technology through the “What’s Cooking? Rethinking farm and food policy in the digital age” blog series. We invite people with diverse backgrounds and perspectives to join us and comment below.
Topics
Agriculture and Food
Digital Development
Poverty
Regions
The World Region
Series
What's Cooking Manager, Global Engagement in the Agriculture and Food Global Practice Its great to imagine a world where small farmers will be able to use mobile devices to improve their productivity and overall costs, but how do you extend the necessary telecommunication infrastructure to the rural areas where many of these farmers operate? Moreover, how do you ensure small farmers can afford access to the appropriate data connections and networks needed to effectively leverage digital innovations in agriculture?

Dear Leslie - Thank you so much for this excellent comment and joining the conversation. It is certainly true that without access to the right telecommunications infrastructure, there can be no use of the technologies described in the blog. The World Bank Group encourages client countries to develop competitive telecommunications markets to increase coverage and bring the costs of service delivery down. Furthermore, the arguments that apply to the public sector support for delivery of electricity and water services in remote areas can also be applied to telecommunications technologies. Exactly how and when the public sector should intervene is part of the subject of the study that we are launching.  Cheers, Julian

So why do ag economists at U MN say 80% of our Minnesota dairy farmers will/should stop dairy farming? They cannot beat the cost of production of mega-dairies in western states. We have 3,000+ dairy farmers left. Based on this, we should have 600 or so left, vastly increased in size. Environment? Soil? Water? Diversity? Animal health? Consolidated markets and distribution chains pick cheap every time. We overproduce. Cheap wins in the USA dairy market. Externalities abound. There is no mechanism in our "leading market system" to price or value externalities, except for a small organic sector, that is now being degraded by industrial "organics".

Dear JSTOCKINGER – Thank you for sharing this comment. It is certainly true that the future of our food production systems may be dominated by a low price and high volume equilibrium. That said, as people become wealthier, they want to know more about their food and how it is produced. So there is a natural tension in the system, and digital technologies may play a role in shifting the system to a higher price and lower volume equilibrium. We don’t have the answers yet and studying the costs and benefits of making this shift and internalizing the associated externalities are part of the purpose of the new study we are launching on understanding the risks and rewards associated with these technologies.

Thecnology and Apps offers a great opportunity for small farmers, however the big challenge is reducing the cost of transportation, distribution, and in some cases even the exportation cost in order to be competitive in a global economy.

Dear Miguel - Thanks for this great comment and you are absolutely correct that the costs of transportation and logistics are a key part of the challenge for small farmers. Could it be that Apps are part of the key to bringing these costs down? Maybe the power in giving people information on where vehicles are on their cell phones will enable their to minimize their transportation costs in whole new ways. Let's gigure out what those Apps should look like and how they can be designed to help farmers!